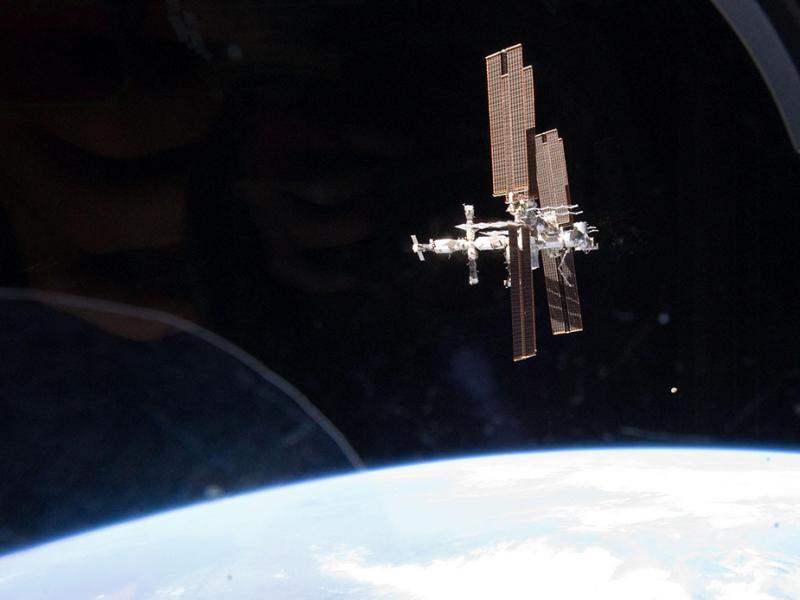 Colonies of bacteria grown aboard space shuttle Atlantis behaved in ways never before observed on Earth, according to a new NASA-funded study from Rensselaer Polytechnic Institute in Troy, N.Y. Recent findings provide important evidence of spaceflight’s effect on the behavior of bacterial communities and represent a key step toward understanding and mitigating the risk these bacteria may pose to astronauts during long-term space missions.

The research team, led by Rensselaer faculty member Cynthia Collins, sent the experiment into orbit aboard Atlantis’ STS-132 mission in May 2010 and its STS-135 mission in July 2011. Samples of the bacteria Pseudomonas aeruginosa were cultured for three days in artificial urine. The space-grown communities of bacteria, called biofilms, formed a column-and-canopy structure not previously observed on Earth. Additionally, biofilms grown during spaceflight had a greater number of live cells, more biomass, and were thicker than control biofilms grown under normal gravity conditions.

Biofilms are complex, three-dimensional microbial communities commonly found in nature. Most biofilms, including those found in the human body, are harmless. Some biofilms, however, have been found to be associated with various diseases.

“Biofilms were rampant on the Mir space station and continue to be a challenge on the International Space Station, but we still don’t really know what role gravity plays in their growth and development,” said Collins, an assistant professor in the Department of Chemical and Biological Engineering at Rensselaer. “Our study offers the first evidence that spaceflight affects community-level behaviors of bacteria and highlights the importance of understanding how both harmful and beneficial human-microbe interactions may be altered during spaceflight.”

Results of the study were published in the April 29 issue of PLOS ONE in the research paper “Spaceflight promotes biofilm formation by Pseudomonas aeruginosa.”

Beyond its importance to astronauts and future space explorers, this research also could lead to novel methods for preventing and treating human disease on Earth. Examining the effects of spaceflight on biofilm formation can provide new insights into how different factors, such as gravity, fluid dynamics, and nutrient availability, affect biofilm formation on Earth. Additionally, the research findings could one day help inform new, innovative approaches for curbing the spread of infections in hospitals, Collins said.

“The opportunity to conduct microbiology research aboard spacecraft is valuable and unique,” said Macarena Parra, who served as the study’s payload science adviser at NASA’s Ames Research Center, Moffett Field, Calif. “Aboard free-flying satellites, or using laboratory facilities aboard the ISS, allows researchers to validate ground-based experiments and discover results that can only be observed in space.”

There is no substitute on Earth for true microgravity conditions. Although ground-based researchers use methods to simulate microgravity in their laboratories, each of these methods has limitations. The results from simulated-microgravity experiments do not always match those seen in actual spaceflight, Parra said.

For this study, the research team flew 12 devices, called group activation packs (GAP), each containing eight vials of Pseudomonas aeruginosa. Artificial urine was chosen as a growth medium because it is a physiologically relevant environment for the study of biofilms formed both inside and outside the human body, and due to the importance of waste and water recycling systems to long-term spaceflight, Collins said.

Each vial also contained a cellulose membrane that provided a good surface upon which the biofilms could grow. While in orbit, astronauts initiated the experiment by manipulating the sealed vials and introducing the bacteria to the artificial urine. Within a matter of minutes, science collaborators performed the exact same actions with the control group of identical GAPs on Earth at NASA’s Kennedy Space Center in Florida.

After the samples were returned to Earth, the research team carefully removed the biofilm-coated membranes from the growth media. They used several lab techniques to determine the thickness of the biofilms, to count the number of living cells, and to quantify the volume per area. Additionally, the researchers used confocal laser-scanning microscopy to capture detailed high-resolution images of the biofilm’s internal 3-D structure.

Looking forward, the research team is going to look at what is taking place inside these oddly shaped biofilms. To get a better picture of how spaceflight affected the physiology of the Pseudomonas aeruginosa, Collins and others will investigate the bacteria’s gene expression related to metabolism and virulence. The team also will build mathematical models to help understand how different factors of the spaceflight environment may impact biofilm growth.

“The unique appearance and structure of the P. aeruginosa biofilms formed in microgravity suggests that nature is capable of adapting to non-terrestrial environments in ways that deserve further studies, including studies exploring long-term growth and adaptation to a low-gravity environment,” Collins said. “Before we start sending astronauts to Mars or embarking on other long-term spaceflight missions, we need to be as certain as possible that we have eliminated or significantly reduced the risk that biofilms pose to the human crew and their equipment.”

This project was competitively selected for development by the Space Life and Physical Sciences Division and funded by NASA’s Space Biology Project of the Human Exploration and Operations Mission Directorate at NASA Headquarters in Washington. The experiment used flight-certified hardware developed by BioServe Space Technologies, Boulder, Colo. Payload operations were managed by NASA Ames.

For more information on the International Space Station, visit: http://www.nasa.gov/station