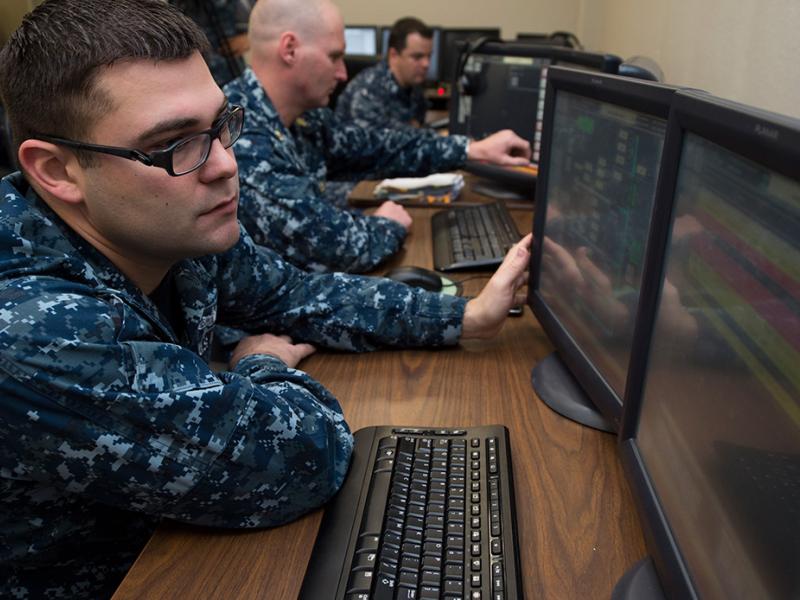 The U.S. Navy is turning to the Information Technology and Web Science (ITWS) Program at Rensselaer Polytechnic Institute to prepare a select group of U.S. Navy officers with skills needed for military cyberspace operations. Under a three-year agreement, the Navy will enroll a group of five to 10 officers yearly in a new “information dominance” concentration within the Master of Science in Information Technology degree program at Rensselaer.

The new concentration will prepare officers for careers designing, building, and managing secure information systems and networks. Such training is essential for the U.S. Navy in an increasingly information-rich environment, said Professor Peter Fox, director of the ITWS program, which is offered through the School of Science.

“When you’re deluged with a large amount of heterogeneous information, you’re presented with challenges that you don’t have when you have sparse amounts of information,” said Fox. As an example, Fox pointed to social networking data during a threatening situation in a crowded area. “Some of the data will have geo location, some will not; some of the information is good quality and some isn’t; some of the tweets come from within the area and some won’t. How do you take diverse information sources that have different levels of quality and uncertainty and combine them together to have a capability to form analysis, let alone make a decision? The way you view it, assemble it, think about it, is different.”

Although the new concentration was created to meet the specific needs of the U.S. Navy, it is also suitable for IT professionals and data scientists who want to enhance their knowledge of how to use pervasive information in situational awareness, operations scenarios, and decision-making.

The new concentration includes advanced study in encryption and network security, formal models, secure coding techniques, policies and ethics for access control in databases and application systems, and other related information assurance and transparency topics. The combination of coursework provides comprehensive coverage of issues and solutions for using high-assurance systems in tactical decision-making.

The first group of Navy officers to enroll in the program will arrive on campus in August.

“We’re excited to be working with the Navy in training their next generation of officers in this emerging field of information dominance,” said Laurie Leshin, dean of the School of Science at Rensselaer. “Understanding large amounts of information is critical to our future national security and it is an honor to be involved in training Navy officers in how to work in the world of Big Data and IT. This is a great recognition for Rensselaer’s ITWS program and its unique interdisciplinary approach to training IT professionals.”

“This partnership with Rensselaer Polytechnic Institute provides an excellent opportunity for members of our Information Dominance Corps (IDC) to advance their education by studying at one of the country’s premier technical educational institutions,” said U.S. Navy Vice Admiral Kendall L. Card, deputy chief of naval operations for information dominance (N2/N6). “This is an important initiative that will benefit both the IDC and the U.S. Navy as a whole as we continue to build our cyber expertise."

ITWS, which combines mastery of Information Age technologies with a variety of academic disciplines, was formed as a graduate degree program in the late 1990s, and offered the nation’s first undergraduate degree in Web science in 2010. Students in the program learn about the physical science underlying the Web and the social science of its impact, as well as the skills involved in running large-scale information systems, developing Web applications, and dealing with the social and policy implications of IT and Web deployments. The program centers on a core set of courses on Web and IT development and management, with 10 concentrations in academic disciplines such as arts, engineering, management, communications, artificial intelligence, Web systems, and medicine. The ITWS department and the new concentration in information dominance support the School of Science interdisciplinary “Network & Data Science, Security & Visualization” theme.

Fox said the Rensselaer program is well-suited to meeting the Navy’s goals.

“The Navy has quickly realized that it needs to provide an intensive further education for key individuals who are being called upon to assess, integrate, and make decisions based on a diversity and volume of digital information sources,” said Fox. “This was a good match with our program, which has a core set of classes that feature both the networking and the data underpinnings that the Navy’s program requires.”