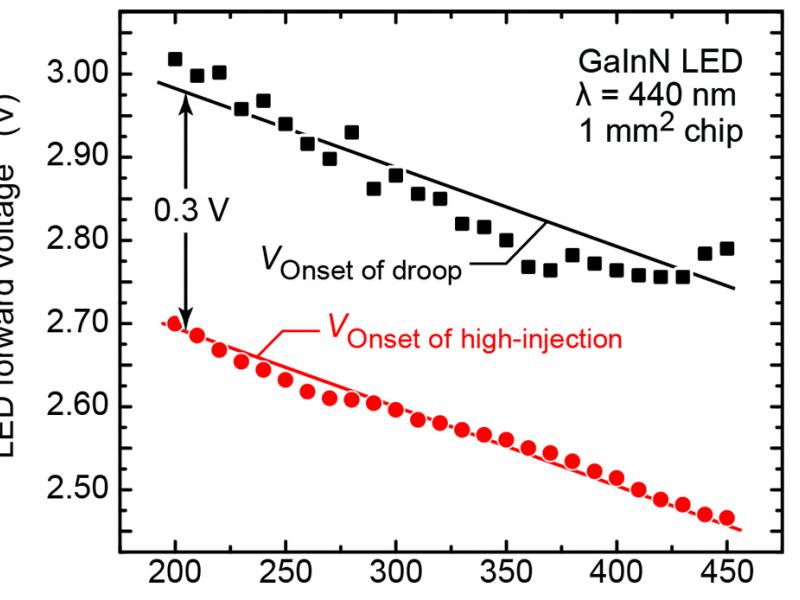 Rensselaer Polytechnic Institute researchers have identified the mechanism behind a plague of LED light bulbs: a flaw called “efficiency droop” that causes LEDs to lose up to 20 percent of their efficiency as they are subjected to greater electrical currents. Efficiency droop, first reported in 1999, has been a key obstacle in the development of LED lighting for situations, like household lighting, that call for economical sources of versatile and bright light.

In a paper recently published in Applied Physics Letters, the researchers identify a phenomena known as “electron leakage” as the culprit.  The research offers the first comprehensive model for the mechanism behind efficiency droop, and may lead to new technologies to solve the problem, said E. Fred Schubert, the Wellfleet Senior Constellation Professor of Future Chips at Rensselaer, founding director of the university’s National Science Foundation-funded Smart Lighting Engineering Research Center, and senior author on the study.

Light-emitting diodes take advantage of the fact that high-energy electrons emit photons, i.e. particles of light, as they move from a higher to a lower energy level. The light-emitting diode is constructed of three sections: an “n-type” section of crystal that is loaded with negatively charged electrons; a p-type section of crystal that contains many positively charged “holes;” and a section in between the two called the “quantum well” or “active region.”

David Meyaard, first author on the study and a doctoral student in electrical engineering, explains that electrons are injected into the active region from the n-type material as holes are injected into the active region from the p-type material. The electrons and holes move in opposite directions and, if they meet in the active region, they recombine, at which point the electron moves to a lower state of energy and emits a photon of light. Unfortunately, researchers have noticed that as more current is applied, LEDs lose efficiency, producing proportionally less light as the current is increased.

Meyaard said the team’s research shows that, under the “high current regime,” an electric field develops within the p-type region of the diode,  allowing electrons to escape the active region where they would otherwise recombine with holes and emit photons of light. This phenomenon, known as “electron leakage,” was first proposed more than five years ago, but Meyaard said the team’s research is the first incontrovertible evidence that it is the cause behind efficiency droop. Meyaard said the team identified the electric field as it began to build up, and showed that, after a sufficiently strong field is built up, the electrons escape out of the active region.

Schubert said their work shows that because electrons have a greater “mobility” than holes, the diode is made from disparate types of carriers.

“If the holes and the electrons had similar properties, there is a symmetry; both would meet in the middle, where the quantum well is, and there they recombine,” said Schubert. “What we have instead is a material system where the electrons are much more mobile than the holes. And because they are very mobile, they diffuse more easily, they also react more easily to an electric field. Because of that asymmetry, or disparity, we have a propensity of the electrons to ‘shoot over’ and to be extracted from the quantum well. And so they don’t meet the hole in the active region and so they don’t emit light.”

Meyaard and Schubert said the team has now turned their attention to developing a new structure for LEDs, based on the model, which they look forward to introducing.