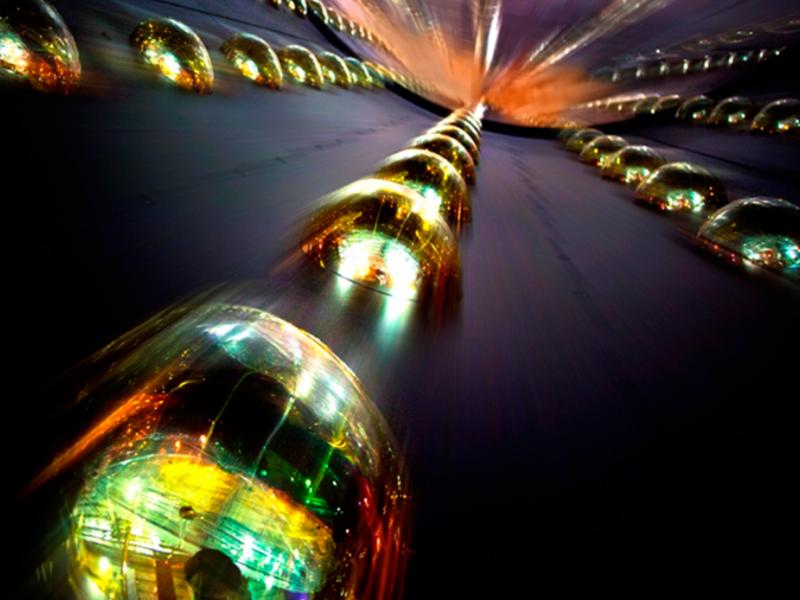 The international Daya Bay Collaboration, which includes researchers from Rensselaer Polytechnic Institute, has announced new results about the transformations of elusive, ghostlike neutrinos, particles that carry invaluable clues about the makeup of the early universe. The latest findings include their first data on how neutrino oscillation—in which neutrinos mix and change into other “flavors,” or types, as they travel—varies with neutrino energy, allowing scientists to measure a key difference in neutrino masses known as “mass splitting.”

The new results are based on four times the data, with twice the precision, of the first Daya Bay results released last year, which established the value of the third and final neutrino “mixing angle.” Mass splitting represents the frequency of neutrino oscillation. Mixing angles, another measure of oscillation, represent the amplitude. Both are crucial for understanding the nature of neutrinos.

Understanding the subtle details of these neutrino oscillations and other properties of these shape-shifting particles may help answer some of the most mysterious questions about the universe.

Rensselaer researchers and students, led by Professor of Physics, Applied Physics, and Astronomy James Napolitano, have led the design, installation, and commissioning of the large-scale water purification system needed to shield the antineutrino detectors from cosmic ray and radioactive backgrounds.

“After more than a year of careful calibrations and detailed study, we are releasing results that show the antineutrino spectrum shape is completely consistent with the rate at which they transform,” Napolitano said. “Electron antineutrinos indeed ‘disappear’ with the appropriate dependence on distance and, separately, with energy, as predicted by the phenomenology known as ‘neutrino oscillations.’”

From Rensselaer, Physics Professor Paul Stoler, research engineer James Wilhelmi, doctoral student Neill Raper, and a large group of undergraduate students all contributed to the project. Raper is working to understand subtle details of the nuclear reactor neutrino spectrum that should lead to even more precise measurements from this and future experiments, Napolitano said.

Measuring neutrino mass and flavors Neutrinos come in three “flavors” (electron, muon, and tau) and each of these exists as a mixture of three masses. Measuring oscillations of neutrinos from one flavor to another gives scientists information on the probability of each flavor occupying each mass state (the mixing angles) and the differences between these masses (mass splitting).

Daya Bay measures neutrino oscillation with electron neutrinos – actually antineutrinos, essentially the same as neutrinos for the purpose of these kinds of measurements. Millions of quadrillions of them are created every second by six powerful reactors. As they travel up to two kilometers to underground detectors, some seem to disappear.

The missing neutrinos don’t vanish; instead they have transformed, changing flavors and becoming invisible to the detectors. The rate at which they transform is the basis for measuring the mixing angle, and the mass splitting is determined by studying how the rate of transformation depends on the neutrino energy.

Daya Bay’s first results were announced in March 2012 and established the unexpectedly large value of the mixing angle theta one-three (q13), the last of three long-sought neutrino mixing angles. The new results from Daya Bay put the precise number for that mixing angle at sin22q13=0.090 plus or minus 0.009. The improvement in precision is a result of having more data to analyze and having the additional measurements of how the oscillation process varies with neutrino energy.

The energy-dependence measurements also open a window to the new analysis that will help scientists tease out the miniscule differences among the three masses. The KamLAND experiment in Japan, and other solar neutrino experiments have previously measured the mass splitting Dm221 by observing the disappearance of electron antineutrinos from reactors about 100 miles from the detector and the disappearance of neutrinos from the sun. The MINOS experiment in the U.S., and the Super-K and T2K experiments in Japan, have determined the effective mass splitting |Dm2mm| using muon neutrinos. Daya Bay scientists have now measured the magnitude of the mass splitting |Dm2ee| to be (2.54±0.20)´10-3 eV2.

The result establishes that the electron neutrino has all three mass states and is consistent with that from muon neutrinos measured by MINOS. Precision measurement of the energy dependence should further the goal of establishing a “hierarchy,” or ranking, of the three mass states for each neutrino flavor.

The latest results from the Daya Bay Collaboration will be announced at the XVth International Workshop on Neutrino Factories, Super Beams and Beta Beams (NuFact2013) in Beijing, China.