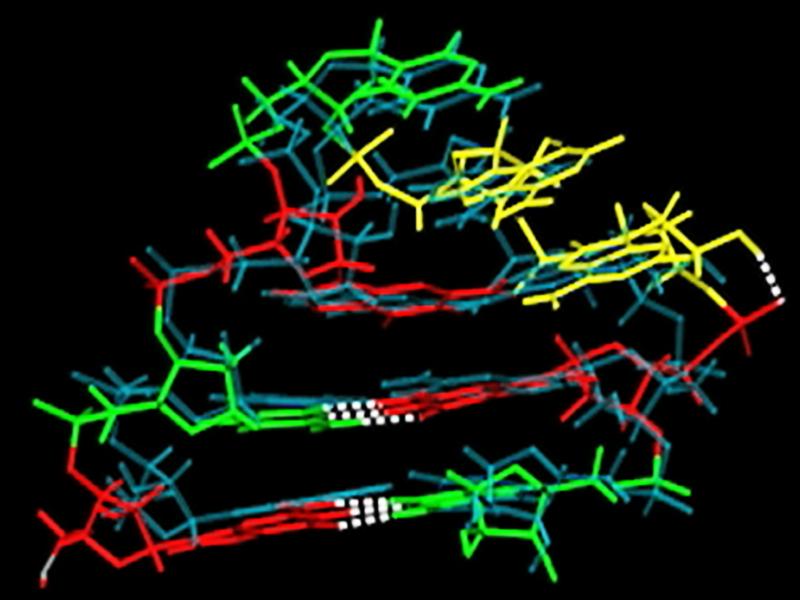 A computational model developed by researchers at Rensselaer Polytechnic Institute is the first to accurately simulate the complex twists of a short sequence of RNA as it folds into a critical hairpin structure known as a “tetraloop.” The research, published today in Proceedings of the National Academy of Sciences, is a glimpse into RNA, found in all life on Earth, and could advance a variety of research areas, including the search for new antibiotics and cures for protein-related diseases.

Existing computational models, based on DNA rather than RNA, do not achieve the atomic level accuracy of the new model, said Angel Garcia, head of the Department of Physics, Applied Physics, and Astronomy within the School of Science at Rensselaer, and senior constellation chaired professor in the Biocomputation and Bioinformatics Constellation, who co-wrote the paper with Alan Chen, a post-doctoral fellow at Rensselaer. The new model Garcia and Chen created can simulate the folding of three known versions of a tetraloop, accurate to within one ten-billionth of a meter.

RNA is involved in many biological functions, such as building proteins, coding and decoding genes, and cellular regulation. RNA molecules are composed of strings of four different “bases” —cytosine, guanine, adenine, and uracil—mounted on a sugar-phosphate backbone. Once the sequence is assembled, the individual bases interact with their neighbors, twisting and swinging on the hinged chemical bonds that connect them to the backbone. When the process is complete, the RNA has folded into its “tertiary” structure, which influences its function. Although researchers can easily alter the sequence of molecules, without accurate computer modeling there they cannot easily see the tertiary structure of their creation.

“Right now, it takes people from molecular biologists, to virologists, to cell biologists, thousands of dollars and years of study to see the structure of an RNA they have made, altered, or are studying,” said Chen. “There are a lot of researchers working on the RNA in viruses and how it attacks the cell, and, while they’re easily able to alter the sequence, they’re essentially working without ever seeing the effects of their changes in molecular detail. Because of this, there’s a lot of trial and error, and our work aimed at helping that.”

Garcia and Chen said that, unlike DNA, which typically twists two strands of bases into a classic double-helix, RNA is single-stranded and folds onto itself, forming many unusual structures. A tetraloop is a small section of single-stranded RNA that is looped into the shape of a hairpin, the curve of which is formed by four bases. Even the sequence of bases in a tetraloop is unusual, violating a standard arrangement described by groundbreaking DNA researchers James Watson and Francis Crick.

To create an effective computational model, Garcia and Chen had to match the unique “recipe” of twisting and swinging proscribed by the interactions between the bases.

“Imagine if you try to produce a recipe of Mario Batali,” said Garcia, referring to a popular chef. “I tell you it has water, salt, fish, and pasta—go produce his recipe. The problem is, you don’t know how much of each, and in what order.”

Instead of a recipe of food ingredients, Garcia and Chen created a computational recipe for the interactions of the bases in the sequence of a tetraloop.

“The problem is one of balancing different forces. It’s the actions between the bases as they stack on top of each other, the interactions of the bases with water, the rotation of the bases relative to a sugar. Those are things that change the balance,” said Garcia.

Garcia said tetraloops are an important area of study because they appear in all organisms, particularly in ribosomes, which manufacture proteins for living cells. Statistically, there could be as many as 256 possible sequences of those four bases, but only three sequences actually appear in tetraloops. Once formed, they are highly stable, outlasting other structures when subjected to the destructive force of increasing heat.

“Tetraloops are sequences which are highly conserved throughout evolution; you find them everywhere, from bacteria to humans,” said Garcia. “From one organism to another, many things can change, but when tetraloops change, they change from one sequence of four bases to one of the other three. They stack against each other and they are hyperstable. And there is a reason for them to be arranged the way they are.”

The paper, titled “High-resolution reversible folding of hyperstable RNA tetraloops using molecular dynamics simulations,” appears in the September 16 online early edition of PNAS, and will be published in the September 20 print edition.