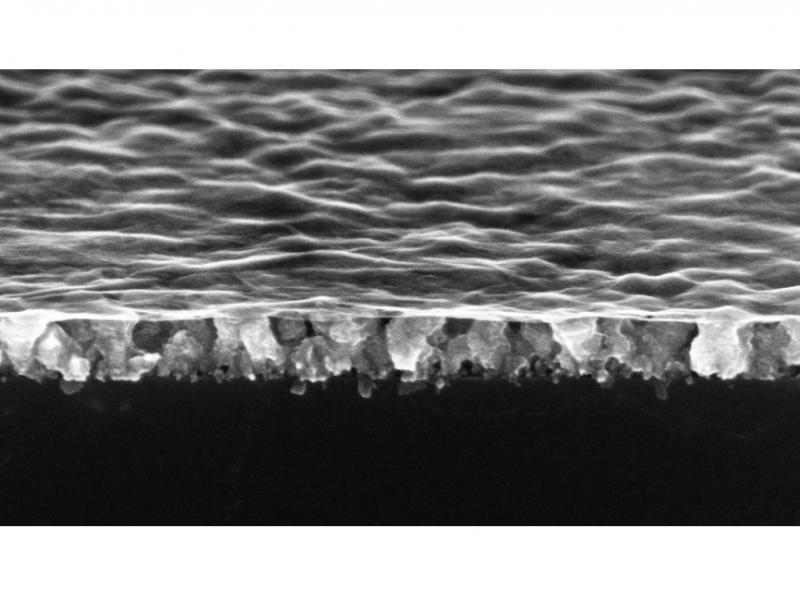 Engineering researchers at Rensselaer Polytechnic Institute have developed a new drape made from graphene—the thinnest material known to science—which can enhance the water-resistant properties of materials with rough surfaces.

These “nanodrapes” are less than a nanometer thick, chemically inert, and provide a layer of protection without changing the properties of the underlying material. The team of researchers, led by Rensselaer Professor Nikhil Koratkar, demonstrated how droplets of water encounter significantly less friction when moving across a surface covered with a nanodrape.

This innovation holds the potential to benefit lab-on-chip devices, high-throughput assays, self-cleaning surfaces, and many other applications requiring the motion of liquid drops on solid surfaces.

“Graphene nanodrapes are the thinnest, most sheer drapes we can imagine. Other than providing a barrier against water, these drapes are optically transparent and cause minimal changes to the topology of the underlying surface,” said Koratkar, the John A. Clark and Edward T. Crossan Professor of Engineering at Rensselaer. “We found this ultrasheer drape prevents the penetration of water into textured surfaces, which has interesting and potentially important technological implications for many applications in micro- and nanofluidics.”

Drops of water can get easily stuck or “pinned” to a material with a nanotextured rough surface. When the droplet falls onto the material, the energy from the fall pushes out or displaces the tiny amounts of air trapped in the textured surface. Once in this pinned state, it is difficult to unpin the droplet and move it around the surface.

Covering the surface with an impermeable graphene drape, however, prevents a droplet from getting pinned to the surface. The nanodrape creates a barrier that prevents the water drop from penetrating into and displacing the air from the textured surface. Instead, the droplet sits on top of the drape, with reduced friction between them, which in turn makes it easier to move the droplet around on the surface, Koratkar said. While helping to minimize this friction, the ultrasheer nanodrape causes minimal disruption to the underlying surface.

The square nanodrapes measure several inches in length, and once applied to a surface are only detectable with a powerful microscope. Koratkar and the research team dropped small amounts of water on a surface of copper nanorods, and the same surface covered with a nanodrape. Water dropped on the bare surface spread out to form large flat drops indicative of a hydrophilic surface, while water dropped on nanodraped surfaces formed a much rounder or spherical drop indicative of a water-repellant or hydrophobic surface. The researchers also used high-speed cameras to observe and measure the shape of the drops as they impacted the surface, spread out, contracted, and finally settled. Once settled, the wettability of the surface was characterized by measuring the angle at which the liquid drop contacted the solid surface.

Koratkar said the water-resistant properties are apparent after the application of a single nanodrape, but the properties are enhanced with the addition of a few additional layers. Nanometer-size cracks and wrinkles likely form in the first layer as it is applied and settles onto the surface. The second and subsequent layers likely suffer from fewer defects, and help to cover up defects on the first layer.

Koratkar and his research team create the nanodrapes by growing graphene—a single layer of carbon atoms arranged like a nanoscale chicken-wire fence—on top of a copper substrate. They then coat the graphene with a polymer film, and use weak acids to remove or etch away the copper, which leaves the polymer layer with the graphene film underneath floating on the top of the liquid acids. The polymer layer with graphene sheet is then transferred to a surface, and the polymer layer is gently washed away using acetone. What remains is a single-carbon-atom thick, ultra-sheer, impermeable graphene drape.

This study is the latest from Koratkar, whose research is positioned at the intersections of nanotechnology, energy, and sustainability. His work has focused on the synthesis, characterization, and application of nanoscale material systems, including graphene. His research group uses different techniques to investigate ways of incorporating these materials into various composites, coatings, and device applications.

Results of the study were published earlier this year by the journal ACS Nano in the paper “Graphene Drape Minimizes the Pinning and Hysteresis of Water Drops on Nanotextured Rough Surfaces.” See the paper at: http://pubs.acs.org/doi/abs/10.1021/nn400466t

The study was funded by the Office of Naval Research and the National Science Foundation, with support from Koratkar’s John A. Clark and Edward T. Crossan Endowed Chair Professorship at Rensselaer.

For more information on Koratkar’s research at Rensselaer, visit: