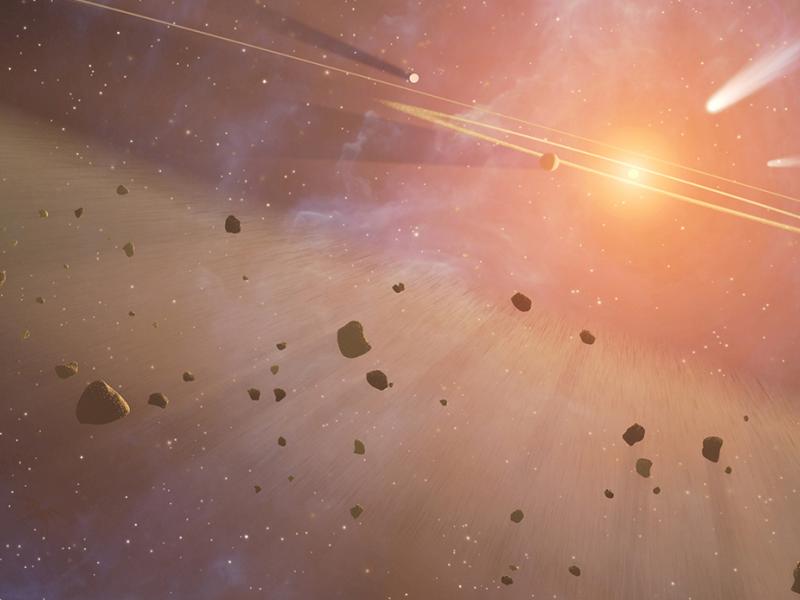 A new look at the early solar system introduces an alternative to a long-taught, but largely discredited, theory that seeks to explain how biomolecules were once able to form inside of asteroids. In place of the outdated theory, researchers at Rensselaer Polytechnic Institute propose a new theory — based on a richer, more accurate image of magnetic fields and solar winds in the early solar system, and a mechanism known as multi-fluid magneto-hydrodynamics — to explain the ancient heating of the asteroid belt.

Although today the asteroid belt between Mars and Jupiter is cold and dry, scientists have long known that warm, wet conditions, suitable to formation of some biomolecules, the building blocks of life, once prevailed. Traces of bio-molecules found inside meteorites – which originated in the asteroid belt –could only have formed in the presence of warmth and moisture. One theory of the origin of life proposes that some of the biomolecules that formed on asteroids may have reached the surfaces of planets, and contributed to the origin of life as we know it.

“The early sun was actually dimmer than the sun today, so in terms of sunlight, the asteroid belt would have been even colder than it is now. And yet we know that some asteroids were heated to the temperature of liquid water, the ‘goldilocks zone,’ which enabled some of these interesting biomolecules to form,” said Wayne Roberge, a professor of physics within the School of Science at Rensselaer, and member of the New York Center for Astrobiology, who co-authored a paper on the subject with Ray Menzel, a graduate student in physics. “Here’s the question: How could that have happened? How could that environment have existed inside an asteroid?”

In the paper, titled “Reexamination of Induction Heating of Primitive Bodies in Protoplanetary Disks” and published today in The Astrophysical Journal, Menzel and Roberge revisit and refute one of two theories proposed decades ago to explain how asteroids could have been heated in the early solar system. Both of the established theories — one involving the same radioactive process that heats the interior of Earth, and the other involving the interaction of plasma (super-heated gases that behave somewhat like fluids) and a magnetic field — are still taught to students of astrobiology.  Although radioactive heating of asteroids was undoubtedly important, current models of radioactive heating make some predictions about temperatures in the asteroid belt that are inconsistent with observations.

Motivated by this, Roberge and Menzel reviewed the second of the two theories, which is based on an early assessment of the young sun and the premise that an object moving through a magnetic field will experience an electric field. According to this theory, as an asteroid moves through the magnetic field of the solar system, it will experience an electric field, which will in turn push electrical currents through the asteroid, heating the asteroid in the same way that electrical currents heat the wires in a toaster.

“It’s a very clever idea, and the mechanism is viable, but the problem is that they made a subtle error in how it should be applied, and that’s what we correct in this paper,” said Roberge. “In our work, we correct the physics, and also apply it to a more modern understanding of the young solar system.”

The solar wind, and the plasma stream it produced, was not as powerful as early theorists assumed, and the researchers have corrected those calculations based on the current understanding of the young sun. Roberge said the early theorists also incorrectly calculated the position of the electric field asteroids would have experienced. Roberge said that, in reality, an electric field would have permeated the asteroid and the space around it, a mistake very few researchers would have realized.

“We’ve calculated the electric field everywhere, including the interior of the asteroid,” Roberge said. “How that electric field comes about is a very specialized thing; about 10 people in the world study that kind of physics. Fortunately, two of them are here at RPI working together.”

What emerges, Menzel and Roberge said, is a new possibility, based on the corrected understanding of the electric fields the asteroids would have experienced, the solar wind and plasma conditions that would have prevailed, and a mechanism known as multi-fluid magneto-hydrodynamics.

Magneto-hydrodynamics is the study of how charged fluids – including plasmas – interact with magnetic fields. The magnetic fields can influence the motion of the charged fluid, or plasma, and vice versa. Magneto-hydrodynamics had a moment of fame as the propulsion system for an experimental nuclear submarine in the 1990 movie The Hunt for Red October.

Multi-fluid magneto-hydrodynamics are an even more specialized variation of the mechanism that apply in situations where the plasma is very weakly ionized, and the neutral particles behave distinctly from the charged particles.

Menzel and Roberge said their new theory is promising, but it raises many questions that merit further exploration.

“We’re just at the beginning of this. It would be wrong to assert that we’ve solved this problem,” Roberge said. “What we’ve done is to introduce a new idea. But through observations and theoretical work, we know have a pretty good paradigm.”

And much as Menzel and Roberge benefited from recent progress in understanding the physical conditions in an emerging planetary system, they hope their own work will advance the field of astrophysics.

“There are a lot of byproducts of this work because, in the course of doing this, we had to really zero in on how an asteroid interacts with the plasma of the young solar system,” said Roberge. “There are a lot of physical processes that we had to consider that have not been considered in this context before.”