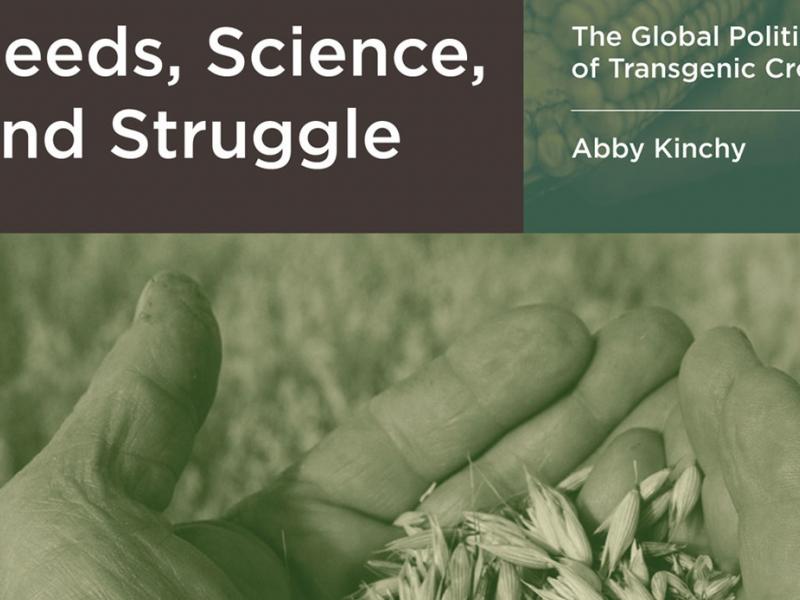 In her recent book, Seeds, Science, and Struggle: The Global Politics of Transgenic Crops (Food, Health, and the Environment), Rensselaer Polytechnic Institute Professor Abby J. Kinchy offers food for thought on challenging questions such as: What values should our agriculture system represent? How can we fairly distribute the benefits of our food system and minimize its negative impacts?

As society grapples with a changing climate, growing population, and degraded water and soil, confronting those and other complex questions is imperative, said Kinchy, an associate professor in the Department of Science  and Technology Studies at Rensselaer. In the face of all that is changing, she said, one thing remains the same: “we must continue to feed ourselves.”

“Despite the increasing popularity of organic and local food, our regulatory and legal institutions are rigged against farmers who want an alternative to the dominant agribusiness model of food production,” Kinchy said “I wanted to tell the stories of farmers who are pushing up against regulatory systems that have failed them, and to prompt serious discussion about changing the criteria we use to evaluate new technologies like genetically engineered seeds.”

In her new book, Kinchy navigates the intersections of science, politics, food, and farming as she delves into the debate and social movements surrounding the introduction of genetically modified seeds into the food supply.

Seeking to “challenge and complicate” a debate that is often boiled down to scientists vs. activists, Kinchy examines struggles over native maize in Mexico and canola grown in Canada. Her methods include interviews, observations, archival research, and analysis of documents like scientific papers, newspapers, and legal documents.

Kinchy examines a theme common to conflicts over genetically engineered crops worldwide. “Many people seek to frame conflict about biotechnology as a struggle to maintain the purity of rational science against political interference,” she said.

Issues as complex as whether and how genetically engineered crops should be introduced into our food supply should not be reduced to a simplistic question of whether the provable risks of doing so outweigh the benefits, she argues. While some opponents say regulatory decisions should not be influenced by the opinions and values of stakeholders like farmers, Kinchy counters that society needs to engage in “broad, democratic deliberation about technological changes in the food system.”

In her work in the Department of Science and Technology Studies at Rensselaer, Kinchy said she guides her students toward general literacy in the varied domains—sociology, biology, population ecology, law, public policy, and history—they will need to address the complex social, scientific, and ethical questions associated with the struggle for sustainability.

Kinchy’s research is not limited to genetically engineered seeds. Recently, she has been investigating the controversy over hydraulic fracturing and the way information about the drilling is imparted to the public. The Duke Environmental Law and Policy Forum published an article by Kinchy in 2012 titled “Can Volunteers Pick up the Slack? Efforts to Fill Knowledge Gaps about the Watershed Effects of Marcellus Shale Gas Development.”

Kinchy joined the Rensselaer faculty in 2007 after previously working as a teaching assistant and research assistant at the University of Wisconsin-Madison, where she received both her doctoral and master’s degrees. She earned her undergraduate degree from Vassar College.

Kinchy is a recipient of the James M. Tien ’66 Early Career Award for Faculty from Rensselaer. She is the co-editor of Controversies in Science and Technology: From Maize to Menopause.

Kinchy’s book, Seeds, Science and Struggle, is available as a paperback from The MIT Press.