Rensselaer at Petascale: AMOS Among the World’s Fastest and Most Powerful Supercomputers 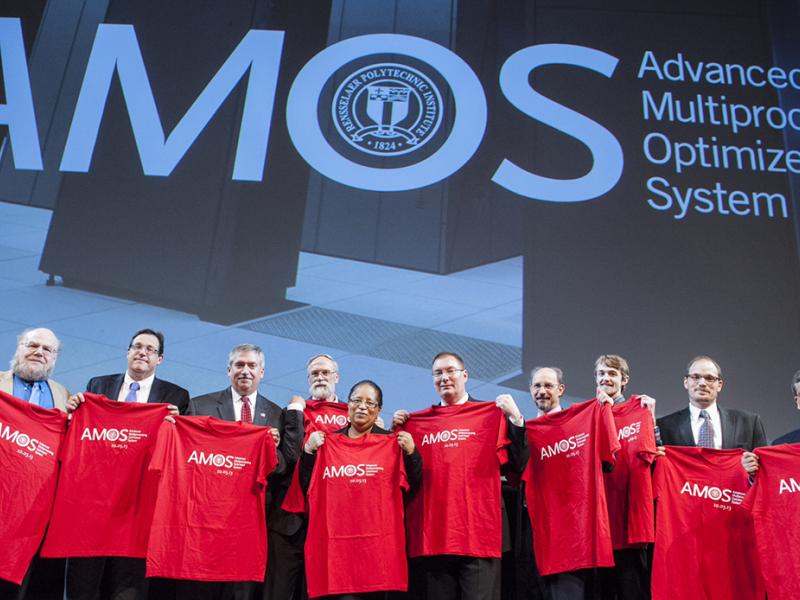 What Are eVTOLs? Are They the Future of Aviation?
Here’s how Fed rate hikes are hurting tech firms
Protect the Future: How to Stop AI from Overpowering Humanity
Designing Assignments in the ChatGPT Era
Rensselaer Researcher Mohammed Zaki Is an AAAS Fellow
October 3, 2013

Rensselaer at Petascale: AMOS Among the World’s Fastest and Most Powerful Supercomputers

With the ability to perform more than one quadrillion calculations per second, AMOS is the most powerful university-based supercomputer in New York state and the Northeast, and among the most powerful in the world. In addition to massive computational power, AMOS has high-performance networking capabilities with a bandwidth of more than four terabytes per second—more than the combined bandwidth of 2 million home Internet subscribers.

This combination of speed and networking is unique among the world’s university-based supercomputing systems, and will enable Rensselaer and its partners in academia and industry to better tackle highly complex, data-rich research challenges ranging from personalized health care, to smart grids, to economic modeling.

AMOS is a five-rack IBM Blue Gene/Q supercomputer with additional equipment, and represents the latest milestone in the decades-long close collaboration between IBM and Rensselaer. In January of this year, IBM provided a Watson cognitive computing system to Rensselaer, Watson at Rensselaer, making it the first university to receive such a system.

Both AMOS (a reference to Rensselaer co-founder Amos Eaton) and Watson (named for IBM founder Thomas J. Watson Sr.) are housed in the Rensselaer supercomputing center which has been renamed the Center for Computational Innovations (CCI). This combination of AMOS’s balanced supercomputing power and Watson at Rensselaer’s ability to understand the subtle nuances of human language and sift through vast amounts of data uniquely positions Rensselaer as a world leader in data-related research, innovation, and education.

“Amos Eaton would be very proud today of the school he helped to establish, as we celebrate with our partners at IBM the arrival of yet another key element in the unique computational ecosystem that is coalescing at Rensselaer Polytechnic Institute. This ecosystem is a combination of remarkable infrastructure, crucial partnerships, and towering talent that is allowing Rensselaer to lead the way in a new era of computation,” said Rensselaer President Shirley Ann Jackson. “The combination of AMOS and Watson in the CCI will help Rensselaer further achieve the overarching goal we have set for ourselves as we approach the 200th anniversary of our founding with The Rensselaer Plan 2024: to be a transformative force with global impact.”

“This new petascale system will enable Rensselaer researchers to easily explore and analyze massive amounts of data empowering discovery and creating new opportunities for breakthroughs,” said John E. Kelly III, senior vice president and director of IBM Research, who was recently elected a member for the National Academy of Engineering for his extraordinary contributions to the United States semiconductor industry. “Together, Rensselaer and IBM are strengthening our commitment to leading at the critical intersection of Big Data, high performance computing, and the new era of cognitive systems.”

“If every person in the world performed one simple mathematical calculation per second continuously without sleep or any breaks, it would take the whole of humanity nearly two days to compute what AMOS could do in a single second,” said Christopher Carothers, director of CCI and a professor in the Department of Computer Science at Rensselaer. “It is such an exciting time to be at Rensselaer. By entering the petascale with AMOS, we are better positioned than ever before to change the world.”

AMOS is a critical cornerstone of the Rensselaer Institute for Data Exploration and Applications—known as The Rensselaer IDEA—which serves as a hub for Rensselaer faculty, staff, and students engaged in data-driven discovery and innovation. The institute is anchored in the strength of Rensselaer in six primary areas: high performance computing, web science, data science, network science, cognitive computing, and immersive technologies.

Working across disciplines and sectors, The Rensselaer IDEA empowers students and researchers with new tools and technologies to access, aggregate, and analyze data from multiple sources and in multiple formats. Related projects and programs span the entire spectrum of high-impact global challenges and opportunities, including basic research, environment and energy, water resources, health care and biomedicine, business and finance, public policy, and national security.

The Rensselaer IDEA connects three of the university’s critical research platforms: the CCI supercomputing center (AMOS and Watson at Rensselaer), the Curtis R. Priem Experimental Media and Performing Arts Center, and the Center for Biotechnology and Interdisciplinary Studies.