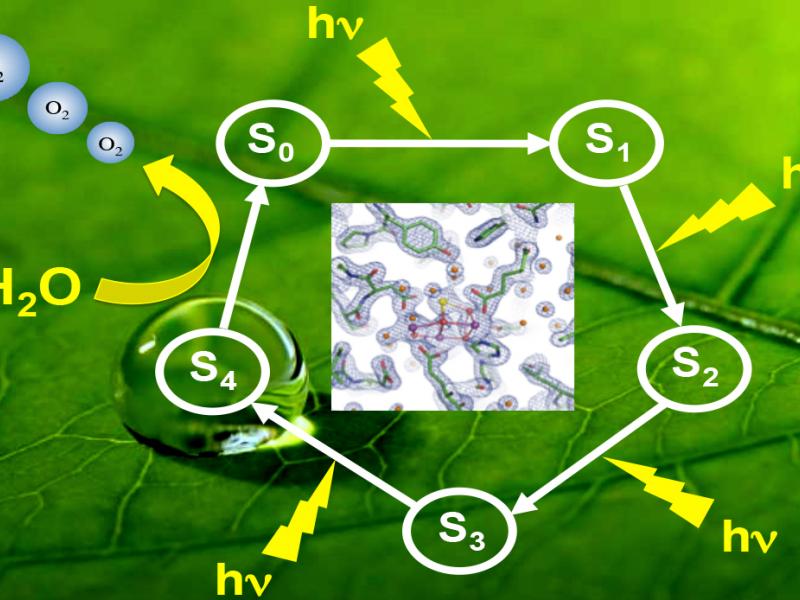 With support from the Photosynthetic Systems Division at the U.S. Department of Energy (DOE), researchers in the School of Science at Rensselaer Polytechnic Institute are expanding a successful research program to uncover the minute workings of the photosynthetic protein, Photosystem II. The high-impact research, led by professor K.V. Lakshmi, seeks to adapt photosynthesis for artificial use as an abundant source of renewable energy.

“I think of Photosystem II as the ‘engine of life,’” said Lakshmi, associate professor of chemistry and chemical biology, and scientific lead at the Baruch ’60 Center for Biochemical Solar Energy Research at Rensselaer. “Photosystem II powers the planet with solar energy. If there is a design that is perfect for harnessing the energy of the sun, this is it. And we want to use nature as a blueprint to design a new generation of bio-inspired solar cells that builds on the efficient design principles of nature.”

Photosystem II, found in plants and cyanobacteria, uses photons of light to break apart molecules of water, extracting electrons to fuel the photosynthetic conversion of light and water into chemical energy for cellular functions. This reaction – solar oxidation of water – takes place in a cluster of oxygen, manganese, and calcium ions called the “oxygen-evolving complex.” The oxygen-evolving complex uses four photons of light to split two molecules of water in five distinct steps known as “S-states.” Each intermediate S-state, numbered from S-0 to S-4, is measured in trillionths of a second, and the final three S-states are highly unstable, making it difficult to determine the exact mechanism by which they occur. In research published in 2012, and supported by the DOE, Lakshmi and her team used advanced spectroscopic techniques to describe the exact atomic-level mechanism of S-2, the third step in the process.

The new $500,000, three-year DOE grant expands the scope of Lakshmi’s research to the structure of the oxygen-evolving complex through the remaining five S-states. In addition, the Baruch ’60 Center is designing an artificial oxygen-evolving complex with the goal of developing man-made photosynthetic devices that capture the efficiency of the light reactions of photosynthesis.

The DOE grant also supports a partnership with Shengbai Zhang, the Gail and Jeffrey L. Kodosky ‘70 Constellation in Physics, Information Technology, and Entrepreneurship at Rensselaer, to develop computational models that augment the leading-edge experimental techniques that Lakshmi developed in her 2011 research at the Baruch ’60 Center. The quantum mechanical calculations that address this highly complex scientific problem are made possible by leveraging the petascale supercomputing system – the most powerful university-based supercomputer in the Northeast and the most powerful supercomputer at a private university in the United States – recently installed at the Rensselaer Center for Computational Innovations.

In describing the mechanism of the S-2 intermediate state, Lakshmi developed techniques that allowed her to isolate the protein from cyanobacteria and spinach, and then use liquid helium to cool the protein and slow its movements. At the precise moment at which the oxygen evolving complex is in the S-2 intermediate state, she takes real-time snapshots of the transformation using pulsed electron paramagnetic resonance spectroscopy. As part of the expanded scope of the project, Lakshmi will also use solids nuclear magnetic resonance spectroscopy to investigate the transfer of hydrogen nuclei during the solar water splitting reaction at the oxygen-evolving complex of photosystem II.

“This started out as a small project where we said, ‘experimentally, let’s try to understand what’s going on in the S-2 intermediate state,’” Lakshmi said. “Our research met with rapid success, and now we are going to significantly increase the scope by saying, ‘now let’s understand what’s happening in the other intermediate states and contribute toward solving the problem of solar water oxidation in nature.’”

This research will provide insight on the complex mechanisms of coupled charge transfer and multi-step electron transfer that are absolutely essential for the water splitting reaction in natural and artificial man-made photosynthesis.

Researchers know that the cluster of oxygen, manganese, and calcium must be shuttling electrons and protons back and forth, gradually transforming two molecules of water into a molecule of di-oxygen, four hydrogen nuclei, and four electrons. And some details of the protein have already been deciphered, including an atomic-level X-ray crystal structure of Photosystem II in its resting state in the absence of light. But a working picture of the oxygen-evolving complex as it absorbs each of the four photons of light remains an obstacle to developing highly efficient, bio-inspired artificial photosynthetic devices for solar energy conversion. The role of novel solar devices in the energy sector could lead to tremendous energy savings, vastly more efficient energy storage and nanoscale engines that are robust, efficient, and inexpensive.

“Solar water splitting in Photosystem II is 95 percent efficient, and in order to replicate it, we need to understand the step-by-step mechanism of water oxidation reaction,” Lakshmi said. “To do that, we have to go full circle and expand the experimental and computational capabilities we have to understand the other S-state intermediates of the reaction.”

Big Data, broad data, high performance computing, data analytics, and Web science are creating a significant transformation globally in the way we make connections, make discoveries, make decisions, make products, and, ultimately, make progress. Lakshmi’s research, under the auspices of the Rensselaer Institute for Data Exploration and Applications – or The Rensselaer IDEA, is part of the university-wide effort at Rensselaer to maximize the capabilities of these tools and technologies for the purpose of expediting scientific discovery and innovation, developing the next generation of these digital enablers, and preparing our students to succeed and lead in this new data-driven world.