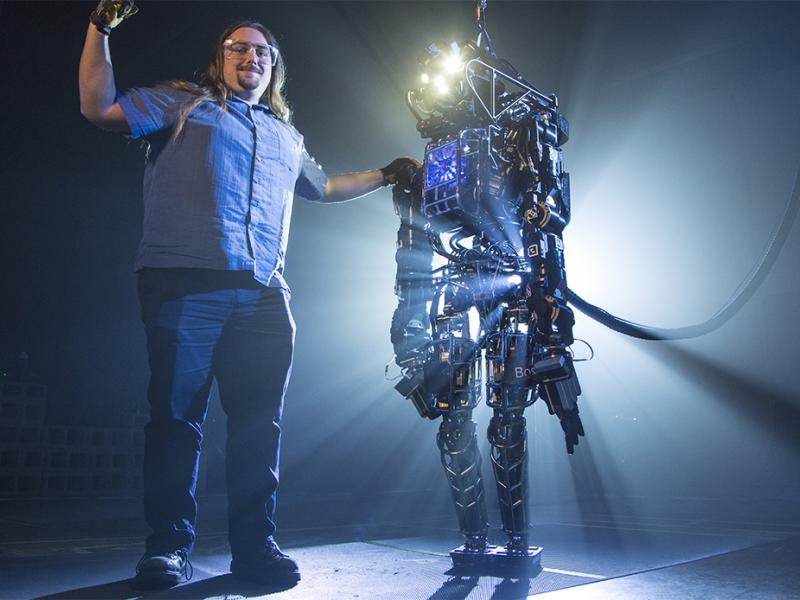 International Competition Pushes Boundaries for Use of Robotics in Disaster Response

Students at Rensselaer Polytechnic Institute are playing a key role developing robotic capabilities for use in disaster response. The students are part of a team that has qualified for the U.S. Defense Advanced Research Projects Agency (DARPA) Robotics Challenge and will compete December 20-21 in trials that will test the capabilities of human-sized semi-autonomous robots.

Teams will be judged on how well their robots complete tasks that test mobility, manipulation, dexterity, perception, and operator control mechanisms. Examples include driving and exiting a vehicle, walking across rocky terrain, climbing a ladder, removing debris, opening and traveling through doors, cutting a hole in a wall with a drill, closing valves, and unraveling and attaching a hose.

“The DARPA challenge shifts the emphasis of robot technology to autonomy and designing robots that can work together with humans to leverage each other’s strengths,” said Jeff Trinkle, computer science professor and director of the Rensselaer Computer Science Department Robotics Lab within the School of Science. “Our team’s technical approach exploits the incomparable spatial perception abilities of humans through a unique tele-operation interface, while taking advantage of the robot’s strength to move debris and use tools. There are indications that future challenges will require teams of humans and robots to work together in tight spaces.”

Trinkle, along with doctoral students Jun Dong, Shuai Li, and Jedediyah Williams, and postdoctoral researcher and visiting scholar Daniel Montrallo Flickinger, are members of the TROOPER team, a partnership of Rensselaer, Lockheed Martin, and the University of Pennsylvania. The team is one of 17 from around the globe to earn a place in the DARPA Challenge trials, which will be held at Homestead-Miami Speedway in Florida.

“Competitions like the DARPA Robotics Challenge offer our students a chance to flex their academic muscles outside of the classroom and, in many cases, on an international stage,” said Laurie Leshin, dean of the School of Science. “Rensselaer School of Science students have taken top honors in data challenges, as well as mathematical modeling, and design and build competitions. We are proud of their achievements, and we wish team TROOPER the best of luck in the coming trials.”

Technology developed for the challenge is expected to help transform the field of robotics. The goal is to speed the development of robots that have task-level autonomy, can operate in hazardous conditions, and are capable of adapting to unpredictable circumstances.

DARPA announced the competition in April 2012, challenging the world’s most advanced robotics research and development organizations to help design and build robots that could aid in the response to disasters such as the Fukushima nuclear meltdown. Teams could participate in two ways: by developing their own robot and control software, or by focusing exclusively on developing software. More than 100 teams entered.

TROOPER chose the software option and, in June, competed in the pre-qualification Virtual Robotics Challenge to showcase the team’s software and its ability to guide a simulated robot through disaster-related tasks. TROOPER’s software solution controls a robot in a state of “supervised autonomy.” With this approach, the robot can complete simple tasks independently. For more complicated tasks, an operator assists the robot remotely.

TROOPER placed among the top nine teams in the pre-qualifying round, advancing them to next week’s competition. As part of moving forward in the competition, each of the nine qualifying team received an Atlas humanoid robot, developed by Boston Dynamics. The nine Atlas teams will compete against one another and against eight teams that will use custom-designed robots.

The Atlas humanoid is 6 feet 2 inches tall, weighs 330 pounds, and has a torso and two arms, hands, legs, and feet. The robot has 28 degrees of freedom in its basic skeleton, and articulated, sensate hands that can manipulate tools designed for human use. Its articulated sensor head is equipped with stereo cameras and a laser range finder.

Despite its advanced features, Atlas’ capabilities pale in comparison with those of humans. “The robot looks cool—a lot like Terminator,” Dong said, “yet it struggles to perform even the simplest human task. It can take weeks to get the robot to make the desired motion. But when that day comes, it’s fantastic.”

The Rensselaer team’s primary focus has been on writing software to manipulate Atlas’ arms and hands. Flickinger, who is the principal liaison between Rensselaer and the other TROOPER partners, has been modeling the flexible joints between the robot’s fingers. Dong has been responsible for kinematics, performing calculations and writing software that enables Atlas to plan the arm movements required for specific tasks. Williams developed simulation models and controllers for various components of Atlas and simulated tasks. Li has been working on grasp planning.

The challenge includes 23 tasks during which teams can earn up to 24 points. The highest-scoring teams will advance to the finals. Slated for the end of 2014, the finals will require robots to attempt consecutive physical tasks with degraded communications between the robots and their operators.