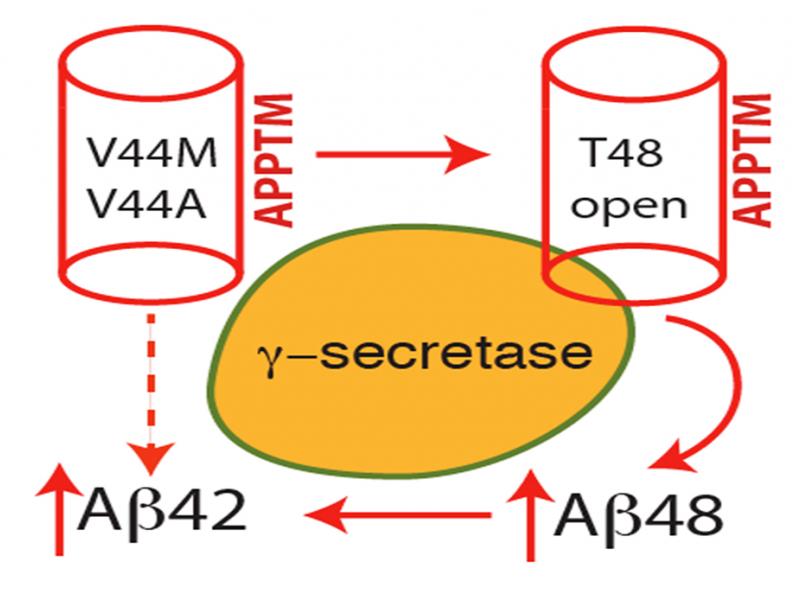 New research, led by Rensselaer Polytechnic Institute researcher Chunyu Wang, has solved one mystery in the development of Familial Alzheimer’s Disease (FAD), a genetic variant of the disease that affects a small fraction of the Alzheimer’s population. In a paper published January 6 in the journal Nature Communications, Wang and his team follow the trail of two genetic mutations – V44M and V44A – known to cause FAD, and show how the mutations lead to biochemical changes long linked to the disease.

The hallmark of FAD is the accumulation of the Amyloid Beta 42 peptide (a short chain of amino acids) in unusually high concentrations within the brain. In a healthy brain, Amyloid Beta-42 (Aβ42) and a similar peptide, Amyloid Beta-40 (Aβ40), are found in a ratio of about 1 to 9. In a brain affected by FAD, this ratio is much higher. The two peptides are nearly identical:  Aβ40 is a chain of 40 amino acids in length; Aβ42 is 42 amino acids in length. However, Aβ42 is much more toxic to neurons and plays a critical role in memory failure.

“The mutations that cause FAD lead to an increased ratio of Aβ42 over Aβ40,” said Wang, an associate professor of biological sciences within the School of Science, director of the biochemistry and biophysics graduate program, and member of the Rensselaer Center for Biotechnology and Interdisciplinary Studies, who co-wrote the paper with Wen Chen, who recently earned his doctorate at Rensselaer. “That’s the biochemistry, and that has been observed by many people. But the question we asked is: how? How do the mutations lead to this increased ratio?”

There are hundreds of known genetic mutations linked to FAD, but they are all related to the processing of a large protein, the amyloid precursor protein (APP), which starts its life partially embedded in the cell membrane of brain cells, and is later cut into several pieces, one of which becomes either Aβ42 or Aβ40.

In a multi-step process, enzymes make several cuts to APP, and the location of the cuts dictates whether a resulting snippet of APP becomes Aβ42 or Aβ40. If an enzyme, γ-secretase, makes an initial cut at an amino acid within APP called Threonine 48 (T48), the remaining cuts result in Aβ42, whereas if the first cut is made at amino acid Leucine 49, the process will result in Aβ40.

Wang’s team used solution nuclear magnetic resonance spectroscopy to study the three-dimensional structure and dynamics of the transmembrane portion of APP affected by the two genetic mutations, and they discovered that the mutations cause a critical change to the T48 amino acid. That change makes it more likely that γ-secretase will prefer a cut at T48, leading to production of Aβ42, and increased concentrations of Aβ42 found in the brains of patients with FAD.

“The basic idea is that – in the mutated versions – this site, T48, becomes more open, more accessible to γ-secretase,” said Wang. “What we found is that the FAD mutation basically opens up the T-48 site, which makes it more likely for γ-secretase to produce Aβ42 peptide.”