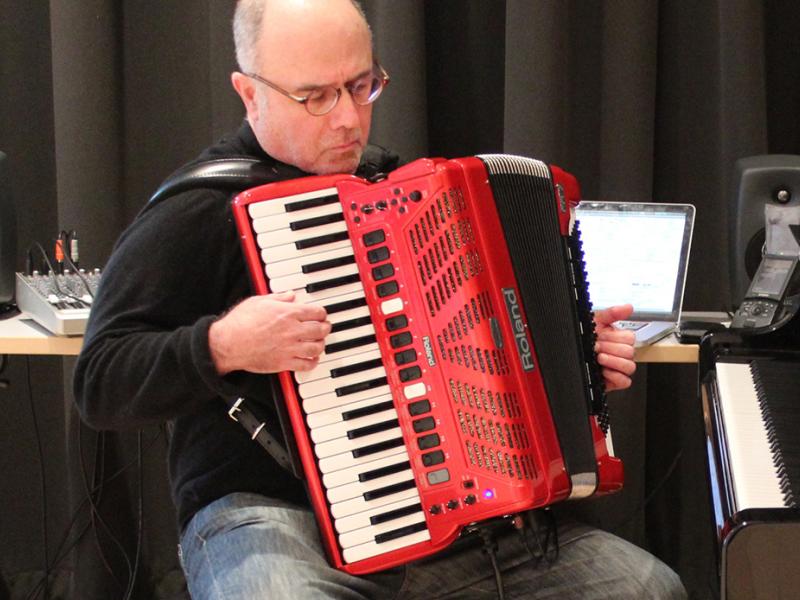 Michael Century, a professor of new media and music in the Rensselaer Polytechnic Institute Department of the Arts, will take the stage at the Curtis R. Priem Experimental Media and Performing Arts Center (EMPAC) at 8 p.m. Friday, Feb. 14.

New Music by Michael Century will be a unique performance for Century, who is musically at home in classical, contemporary, and improvisational settings. The concert will be performed in two parts: the first half features Century performing his original compositions as part of a jazz trio; the second half is Century performing in a duet with a computer. The performance “presents the range of my music, which covers the contrast between all-acoustic and highly technological,” Century said.

The original compositions that will be performed by the jazz trio – comprised of Century on piano, Mark Foster on drums, and Kevin Barcomb on saxophone – are improvisational, but inspired by the structures of traditional jazz music as well as minimalism.

“My compositions are all ones that call for the individual musician to be improvisational,” Century said. “But the compositional element is also quite strict, demanding a lot of precision.”

The second half of the performance, titled Triple Duo, is more experimental. Century will perform an original three-movement composition as a soloist, on both accordion and a technologically advanced version of a player piano, with a computer-generated partner.

“The Triple Duo too involves a lot of improvisation – I play the piece in a spontaneous way; every time it’s different,” Century said.  “There is also a program of sorts, an allegory about the encounter between human and machine musicality, ending ultimately in reconciliation.”

The combined effect of both halves of the performance will be a representation of the breadth of Century’s musical talents and academic interests.

“It fits nicely with where we’re going with music at Rensselaer, which is not just a technology direction and not just an acoustic direction,” he said.

Century teaches a variety of courses in music, history of music, digital art, and media art and history. He is also the founding director of the Rensselaer Contemporary Music Ensemble.

Mark Foster is a member of the Albany Symphony Orchestra and the Empire Jazz Orchestra, and teaches percussion at Skidmore College and the College of Saint Rose. He is a graduate of the Eastman School of Music and was one of the ensemble directors in Rensselaer’s 2013 production of Circadian Rhythms, by Susie Ibarra.

Kevin Barcomb is a member of the Refrigerators and the Empire Jazz Orchestra. A music educator in the Brittonkill School District, he also has a private studio in Delmar. He studied jazz at the Berklee College of Music and is a graduate of the University at Albany and the College of Saint Rose.

The 8 p.m. Friday, Feb. 14, performance at EMPAC is free and open to the public.