Researchers Create Synthetic Version of Heparin for Use in Kidney Patients 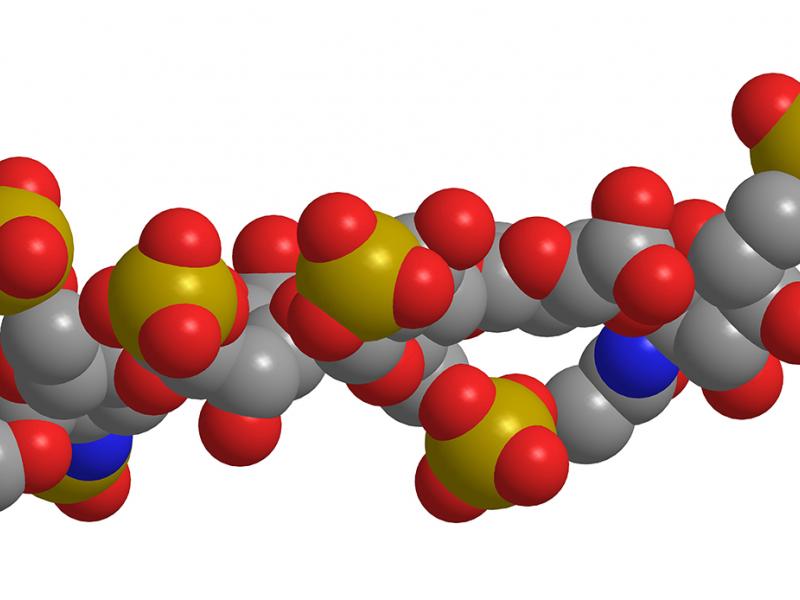 Researchers Create Synthetic Version of Heparin for Use in Kidney Patients

Researchers at Rensselaer Polytechnic Institute and the University of North Carolina at Chapel Hill (UNC) have created a synthetic form of low-molecular-weight heparin that can be reversed in cases of overdose and would be safer for patients with poor kidney function.

“We took this drug and not only made it cost effectively, but we’ve also improved the properties of the drug,” said Robert Linhardt, the Ann and John H. Broadbent Jr. ’59 Senior Constellation Professor of Biocatalysis and Metabolic Engineering, a member of the Rensselaer Center for Biotechnology and Interdisciplinary Studies (CBIS), and one of the inventors of the new drug. “The synthetic version that we’ve made is reversible, it can be used in renal patients, and it doesn’t come from animals, which is a critical advance in safety.”

Heparin is an anticoagulant, and is most commonly extracted from pig intestines in two forms: unfractionated heparin, which is commonly used in procedures such as dialysis, and a more-refined low-molecular-weight (LMW) heparin, which is used around the world for preventing dangerous blood clots. A team led by Linhardt and Jian Liu, a professor in the UNC Eshelman School of Pharmacy, created a synthetic version of LMW heparin for which there is an existing antidote. Their creation is described in an article published online February 23 in the journal  Nature Chemical Biology.

Linhardt and Liu used a chemo-enzymatic process to synthesize the drug, an approach they developed in research on a simpler anticoagulant drug published in Science in October 2011. Synthesizing LMW heparin allowed them to make many improvements on the animal-derived form of the drug currently available. Linhardt’s research supports the Rensselaer School of Science interdisciplinary theme of biomedical science and applications, and is part of a research focus on biocatalysis and metabolic engineering within CBIS. His research on LMW heparin was funded by the National Institutes of Health.

Up to 5 percent of patients receiving heparin experience some form of uncontrolled bleeding. Patients receiving unfractionated heparin are in less danger because there is an existing Federal Drug Administration-approved antidote (protamine) available. Protamine is not as effective in reversing naturally derived LMW heparin, so Linhardt and Liu engineered their drug’s molecular structure so that protamine is able to deactivate it.

Naturally produced LMW heparin is cleared from the body by the kidneys, which can make it unsuitable for patients with a weakened renal system, a relatively common condition among patients requiring anticoagulation. Linhardt and Liu made additional changes allowing their drug to bind to receptors that clear it through the liver.

LMW heparin makes up more than half the U.S. market for heparin. Linhardt and Liu said the new version they created is a safe, economically viable alternative to the existing animal-derived supply. But the new drug would require FDA approval, and would probably also undergo alteration on the path to market.

“This is a discovery target. The process that we’ve used to make it is clearly capable of making the final product. But drug developers would probably want to change some details,” Linhardt said. “We’ve advanced the method to make this drug. Now it’s a question of looking at exactly what the new drug would be.”

Heparin prevents blood clots from forming and is most often used during and after such procedures as kidney dialysis, heart bypass surgery, stent implantation, and knee and hip replacement. Its side effects can include uncontrolled bleeding and thrombocytopenia (too few platelets in the blood). The worldwide sales of heparin are estimated at $4 billion annually.

The natural form of the drug was in the spotlight in spring 2008 when more than 80 people died and hundreds of others suffered adverse reactions to it, leading to recalls of heparin in countries around the world. Authorities linked the problems to a contaminant in raw natural heparin from China.

“Whenever you mix the food chain and the drug chain together, you end up with potential for disaster. Whether it comes from contamination, adulteration, impurities like viruses or prions – any of those possibilities are much more likely when you make something in an uncontrolled environment,” said Linhardt. “This is a drug that millions of people rely upon, and it’s important to develop a safe, synthetic alternative to the current supply chain.”