Archives of Rensselaer Student Newspaper Offer Window Into Students’ Views of Themselves, Their Campus Throughout History 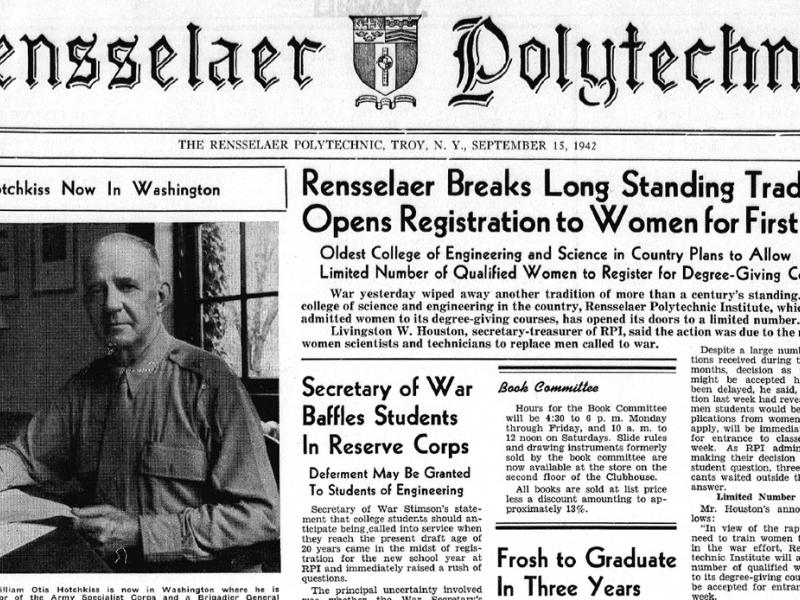 Back issues of Rensselaer's student newspaper are made available to the public for viewing only. All rights are reserved. For additional copyright information, please contact the Polytechnic Editor in Chief.

Archives of Rensselaer Student Newspaper Offer Window Into Students’ Views of Themselves, Their Campus Throughout History

The archive offers a window into the way Rensselaer students saw themselves and their Institute through history.

The earliest editions of The Poly include challenging math problems, news from other universities in the Northeast including Harvard, Yale, and Cornell, short fiction, poems, alumni news, athletic scores, and social news. The advertisements offer the finest apothecaries, boot makers, tailors, and hatters.

A 1924 edition describes festivities for the Institute’s centennial, which included a keynote speech from then-Secretary of Commerce Herbert Hoover, five years before he took office as the 31st president of the United States. (Click the link and then click the “Continue” button in the lower right corner to proceed to the issue.)

The Dec. 13, 1967, edition offers a review of a concert The Doors played on campus as part of Frosh Fling Weekend: “Instead of setting the house on fire, Jim (Morrison) failed to even break the ice. He seemed disgusted with the whole scene at the end and showed how he felt when he cried, ‘If this is Troy, I’m with the Greeks.’ ”

Throughout the years, stories in The Poly touch on historical moments and reveal the way they impacted campus life. Editions published during World War II indicate that degree programs were condensed to allow students to complete them before being called up to war. Those editions also share news of alumni fighting overseas.

The story quotes Institute secretary-treasurer (and future president) Livingston W. Houston as saying that it was necessary to admit women “due to the need to train women scientists and technicians to replace men called to war.”

Today, nearly 30 percent of all undergraduate and graduate students at Rensselaer are female.

The staff of the Institute Archives is now working to add to the archive recent issues of The Poly – dating from 2002 to today – that were produced digitally.

The digitization is part of an ongoing effort to both preserve and make accessible the newspaper archives. In 2001, the fragile newspapers were preserved on microfilm. Then the 41 reels of microfilm were scanned by Hudson Microimaging using optical character recognition so the entire archives can be viewed, and all the text searched, online.

In a post on the RPI History Revealed blog, archivist Tammy Gobert writes that in total about 2,800 issues and more than 41,000 individual pages were digitized in this process.