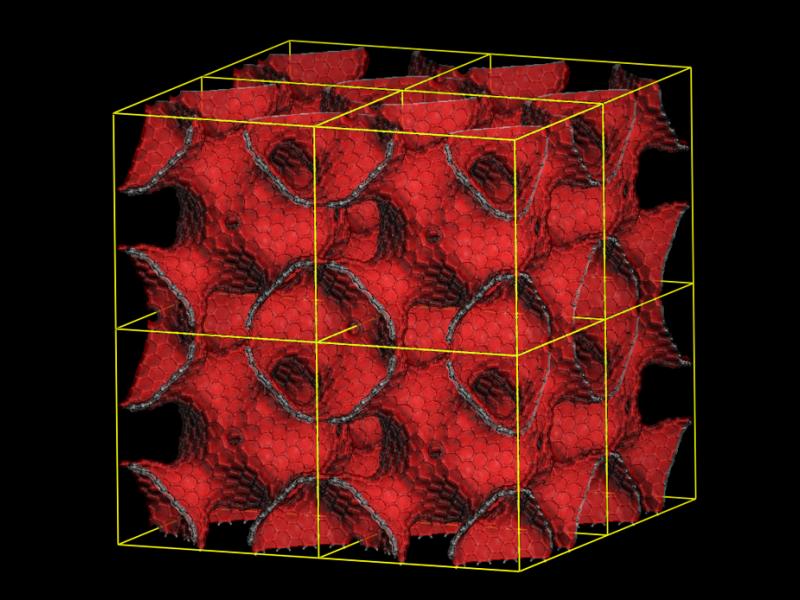 Physicist Explores the Possible Conformation and Applications of 2-D Materials

Humberto Terrones, an expert in nanostructures, has been appointed as the Rayleigh Chair for Theoretical Physics and a tenured full professor in the Department of Physics, Applied Physics, and Astronomy at Rensselaer Polytechnic Institute. Terrones joins Rensselaer from Pennsylvania State University.

“With an accomplished record of discovery on the physics and chemistry of nanostructures, including both computational and experimental breakthroughs, we are so pleased to have Dr. Terrones join Rensselaer,” said Laurie Leshin, dean of the School of Science. “His research is leading to the development of new materials with astonishing properties, and is closely aligned to the Institute’s signature research thrust of Nanotechnology and Advanced Materials.”

Terrones researches layered nanostructures — very thin materials, some with a thickness of only one atom – such as graphene and hexagonal boron nitiride. He performs theoretical modeling of the structural, vibrational, and electronic properties of these materials, as well as experimental synthesis and characterization, which is used to validate the models. Recently, Terrones has been focusing on emerging nanomaterials such as zinc oxide. His research supports the School of Science interdisciplinary theme in materials at the nanoscale.

“The arrangement of atoms determines the properties that a material will have,” Terrones said. “With different arrangements and different shapes, you create complexity and functionality. Developing these materials adds to our basic knowledge, while their unique properties offer many possible applications.”

Terrones began his research on graphene — a one-atom thick sheet of carbon atoms — more than 25 years ago. Graphene is composed of a repeating hexagonal arrangement of carbon atoms, similar to a honeycomb pattern, and is easily found in nature (a pencil lead is made of layers of graphene, which form a crystal of graphite, one of the earliest layered structures studied). During his doctoral studies at the University of London in the late 1980s, Terrones and his adviser Alan L. Mackay published the first scientific paper to propose that flat sheets of graphene could be curved to produce a porous saddle-shaped structure, today called “schwarzites.”

“Curvature changes the shape of a material, in this case graphene, and produces something which has different properties than graphene,” said Terrones. “And we introduced this concept of curvature in the context of graphene.”

Terrones explained that a layered material one atom in thickness can assume the three geometries possible in three-dimensional space: a flat plane, a sphere, and a hyperbolic or saddle-shape. All other more complex structures combine these three geometries.

Theoretically, schwarzites could be produced by introducing heptagonal or octagonal rings of carbon into the hexagonal honeycomb arrangement of graphene.

“There is no reason for them not to exist; they don’t violate any rules of geometry, physics, or chemistry and the structure could exist because it is energetically stable according to our calculations,” Terrones said. “But there are barriers to synthesizing these shapes; one would need a template to convince the atoms to take this form.”

In addition to theory, Terrones conducts experiments to test the properties of layered materials that have been synthesized. With experiments, Terrones is able to characterize properties like conductivity, strength, optoelectronic behavior, and piezoelectricity. In his work, he uses powerful instruments like aberration corrected transmission electron microscopes, Raman spectrometers, atomic force microscopes, and scanning tunneling microscopes, which allow him to characterize a nanostructure and study the shape and position of its atoms.

The Rayleigh Professorship for Theoretical Physics is supported by an endowment established in 1962 by Rensselaer alumnus Keeve M. Siegel, Class of 1948. The endowment was named after John William Strutt, the third Baron Rayleigh, who was awarded the Nobel Prize in Physics in 1904 for work in the field of gas physics.