Recently Developed Nanomaterial May Be Suitable for Use in Desalination 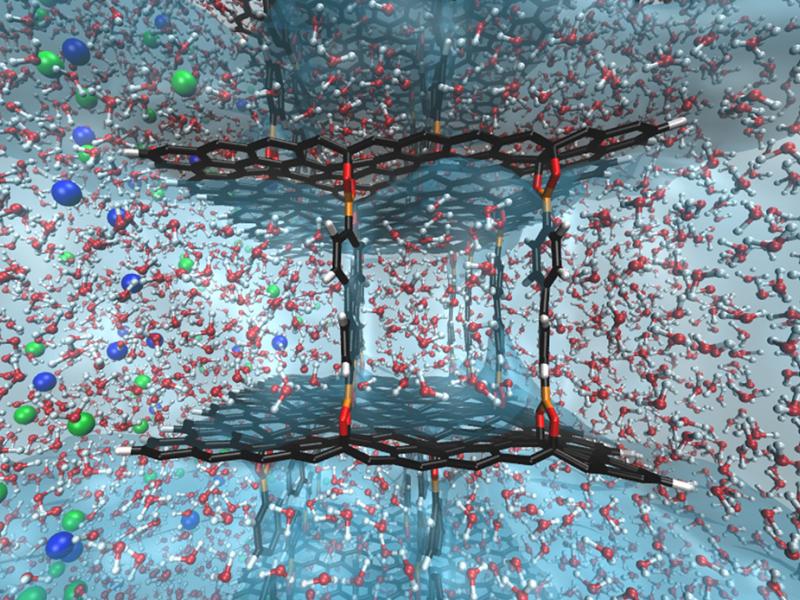 Salt, represented by Na+ and Cl- ions, in large blue and green spheres, are present in the water above the membrane, but the water is completely salt-free after it goes through the membrane.

Recently Developed Nanomaterial May Be Suitable for Use in Desalination

Research results in computational modeling indicate that a newly developed nanomaterial may be suitable for applications in water desalination and other purification. The research was conducted by Vincent Meunier, the Gail and Jeffrey L. Kodosky ’70 Constellation Professor of Physics, Information Technology, and Entrepreneurship at Rensselaer Polytechnic Institute, in cooperation with Oak Ridge National Laboratory.

Meunier and Oak Ridge researcher Bobby Sumpter used supercomputer simulations to explore the potential of a hybrid material called graphene oxide frameworks (GOFs), first introduced in 2010. GOFs are sheets of oxidized graphene, connected by chemical links at some of the oxidation sites. The material does not decompose in water, and has other mechanical properties that make it a good candidate for many applications.

The researchers investigated the material for its potential use as a desalination membrane. Reverse osmosis systems, which make up approximately 40 percent of the world’s desalination capacity, generate fresh water by applying pressure to force saltwater through a semi-permeable membrane.

“One big problem for desalination is speed — how much water can you push through per day,” said Meunier, whose research contributes to a School of Science interdisciplinary theme in materials at the nanoscale. “You can have a great membrane material but if you can treat only a cup of water a day, that’s not going to be useful or cost-effective.”

After developing computational models to describe the interactions among the material’s atoms, Sumpter, Meunier, and Adrien Nicolaï, a Rensselaer postdoctoral research fellow who conducted the calculations and performed the analyses, set out to compute the ideal configuration for a GOF desalination membrane. They used high performance computing to simulate how layer thickness, the density of the linking pillars, and applied pressure affect the material’s performance.

“There’s a sweet spot for the density of the linkers,” said Meunier. “If you have a high density of linkers, it’ll be super selective, but it will also slow it down. You need both selectivity and permeability.”

The simulations revealed that fine-tuning the GOF structure results in the ability to remove all the ions from saltwater at a much quicker rate – approximately 100 times faster than the materials currently used as reverse osmosis membranes. The use of water-repellent graphene as part of the porous membrane contributes to the increased performance.

“Water is trying to avoid being in contact with graphene, so you can design it in such a way that you’re forcing the water not to be close to one layer but also not to be close to the other,” Meunier said. “This effect creates channels, which direct water through the system very quickly.”

The team’s most recent simulations focused on the removal of salt ions, but the researchers note that the GOF material could be used as filtration membranes for other contaminants such as bacteria. Since GOFs are made with abundant, inexpensive materials through a standard fabrication process, the researchers also believe that the GOF-based membranes could help make desalination more economically viable.

“We believe it’s scalable; that the chemical engineering industry could potentially produce it in bulk,” Sumpter said.

The team’s latest results are published as “Tunable water desalination across graphene oxide framework membranes” in the March 17 edition of Physical Chemistry Chemical Physics. The Office of Naval Research and the Department of Energy’s Office of Science supported the research.

Big Data, broad data, high performance computing, data analytics, and Web science are creating a significant transformation globally in the way we make connections, make discoveries, make decisions, make products, and ultimately make progress. Meunier’s research is a component of Rensselaer’s university-wide effort to maximize the capabilities of these tools and technologies for the purpose of expediting scientific discovery and innovation, developing the next generation of these digital enablers, and preparing our students to succeed and lead in this new data-driven world.