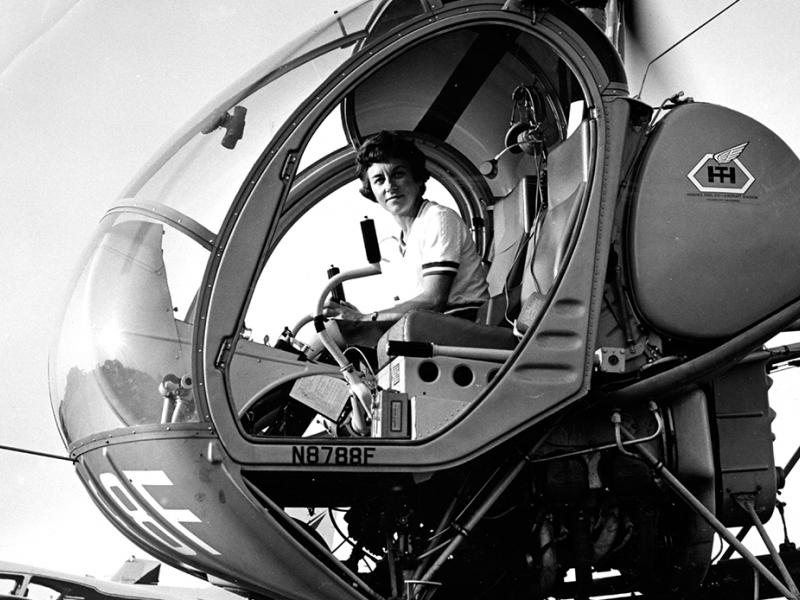 Nancy DeLoye Fitzroy, Class of 1949, To Be Awarded Highest Honor Given to Alumni of Rensselaer School of Engineering

Rensselaer will honor Fitzroy, an internationally recognized and honored expert in heat transfer and fluid flow, with a ceremony at 4 p.m. Monday, May 5, in the Center for Biotechnology and Interdisciplinary Studies auditorium. As part of the ceremony, Fitzroy will have a conversation about her life and career with Rensselaer President Shirley Ann Jackson. The conversation will be followed by a reception, both of which are free and open to the campus community.

Fitzroy, one of the world’s earliest woman helicopter pilots, was the first woman in the United States to head a major professional engineering society, the American Society of Mechanical Engineers (ASME), and is the first woman to receive the Davies Medal for Engineering Achievement.

“Nancy Fitzroy is a world-class engineer, a pioneer, and a spirited leader. Her technical contributions to the fields of heat transfer and fluid flow have been fundamental to a range of technologies, from satellites, to toasters, to nuclear reactor cores. Her leadership in engineering professional societies and commitment to inspiring the next generations of young people has helped strengthen engineering in the United States and around the world,” President Jackson said. “At Rensselaer we ask, ‘why not change the world?’ Dr. Fitzroy has done just that. We are honored to award her the Davies Medal.”

In honor of one of the Institute’s most accomplished, active, and loyal alumni, Clarence E. Davies ’14, Rensselaer established the Davies Medal for Engineering Achievement in 1980 to recognize a Rensselaer alumnus or alumna with a distinguished career of engineering achievement, public service, and technical and managerial accomplishments.

The Davies Medal award at Rensselaer is funded by an endowment from Mr. and Mrs. J. Erik Jonsson ’22.

A native of the Pittsfield, Mass., area, Fitzroy graduated from Rensselaer in 1949 with a bachelor’s degree in chemical engineering. She worked at General Electric Company from 1950 until her retirement in 1987, serving in a number of engineering and engineering manager roles. She specialized in heat transfer and fluid flow research, and early in her career was among the first engineers to work on the design of heat transfer surfaces in nuclear reactor cores. Later she worked in corporate research and development, where she consulted on technical problems in the field of heat transfer in gas turbines, space satellites, and other GE products. A prolific researcher, she is the author of more than 100 technical papers and holds three patents. She is also a registered professional engineer in New York.

Throughout her career and after retirement, Fitzroy has been active in professional societies and in 1986 became the first woman president of the ASME. Following her presidency, she served ASME in several different capacities including director of the ASME Foundation Board and trustee.

Fitzroy is the recipient of many honors and recognitions, including the Society of Women Engineers Achievement Award in 1972, an ASME Centennial Medallion in 1980, was elected a fellow of ASME, and received an ASME Honorary Membership in 2008. Additionally, in 1995 she was elected to the National Academy of Engineering and in 1988 was chosen as an Honorary Fellow of Britain’s Institution of Mechanical Engineers.

For her contributions to her alma mater, Fitzroy in 1975 received the Demers Medal for outstanding service to Rensselaer, and in 1996 received the Distinguished Service Award from the Rensselaer Alumni Association. Her accomplishments were again recognized in 1999 when she was inducted into the Rensselaer Alumni Hall of Fame. She established the Nancy Fitzroy Scholarship Fund in 1979 at Rensselaer to encourage young women to pursue careers in science and technology, a scholarship that continues today. She is also an honored member of the Rensselaer Heritage Society.

For more information on the Davies Medal at Rensselaer, including past winners, visit: http://eng.rpi.edu/davies/