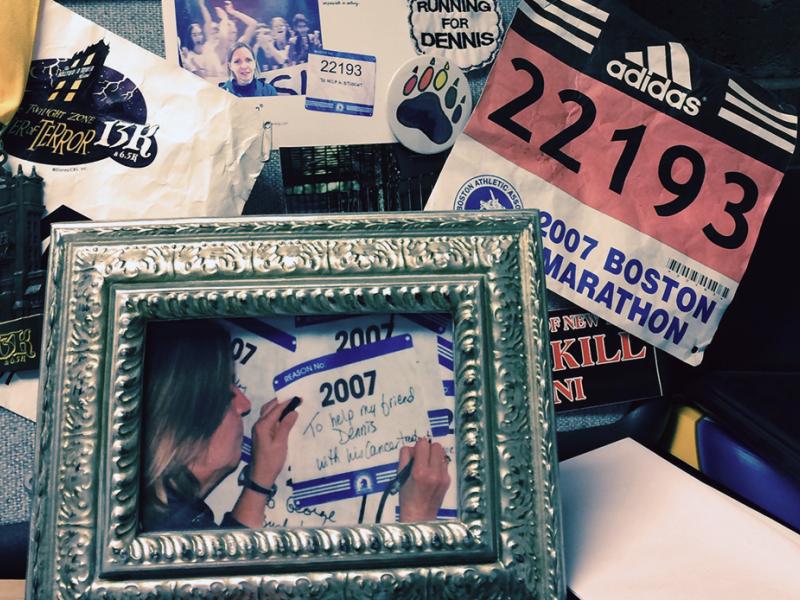 Cameron McLean, director of student activities in the Rensselaer Union ran the Boston Marathon to show her support for a Rensselaer student who was dealing with cancer. Photo Credit: Image courtesy of Cameron McLean

Running often becomes a way of life for individuals who are looking to get fit, support a humanitarian effort, pursue a personal challenge, or inspire others through a commitment to training and perseverance. For three

Rensselaer Polytechnic Institute  employees, running embodies all of these – and more – as they reflect on the most poignant moments they’ve experienced while pursuing the sport of running, and what it has meant to them.

Norris’ Story: The Run That Forever Changed My Life – Connecting With Nature, a Foggy Day, and Loon Calls

“Marathoning was the furthest thing from my mind,” said Norris Pearson, operations manager for the Houston Field House. “In a desire to lose weight, I joined the Division of Human Resources’ Weight Watchers program, and then incorporated their walking/running program into my routine, which helped me to lose over 70 pounds. That was in 2000.”

Today, with 30 marathons – which are 26.2 miles – under his belt, including eight Boston Marathons, Pearson hits the pavement six days a week, and often logs from 50 to 70 miles each week. “Running is addictive,” Pearson said. “Cameron McLean, director of student activities in the Rensselaer Union, was a huge influence on me and encouraged me to take up running. It’s given me an opportunity to build up physically, and connect with other runners. Most of all, being out in nature, in our natural environment, with other runners has been a wonderful way for me to de-stress and feel refreshed.”

Running has challenged him, and has also helped Pearson face challenges. In the fall of 2012, side-lined by a hip injury and related surgery, he wasn’t able to run for several months. While recovering, he began to wonder if his running days were numbered.

During a trip to the family summer home in the Thousand Islands, things seemed to change. “I remember getting into our boat one morning, and heading over to a smaller island for a short run,” Pearson said. “Taking that first step and running a short distance was amazing for me. It was a foggy day, and you could hear the loons calling, and I just felt even more connected with nature and my spirit. I remember asking God to give me days like this, and expressing that speed and distance did not really matter in the scheme of it all. I knew that I would never take that experience – that moment of running – for granted.”

Soon after, Pearson was back in the swing of marathon training, and qualified for the 2013 Boston Marathon.

Pearson’s wife, Marguerite, doesn’t usually accompany him to marathons, but this time – with tickets to the VIP seating area at the finish line – she did. Since family and friends planned to watch the marathon, they decided that Marguerite should stand next to a white American flag pole, so that family and friends could see her.

“At the starting line, I remember saying that I would not take this experience for granted,” Pearson said. “I just wanted to take everything in –  the sounds, the noises, the crowd, my feet touching the pavement. Turning onto Boylston Street, the final stretch, I intentionally slowed down. I wanted to take in the moment, and I was comfortable with the fact that if I could not run again, I knew that I’d had a great run.”

“We didn’t really know what was happening,” Pearson said. “Once we learned about the bombings, I kept thinking that the woman I married was steps away from the bombs. To this day, when I see an image of that pole on Boylston Street with the American flag, it triggers that moment. Anything can happen in life, and I realize that I am forever grateful for the moments that I’ve had.”

Nolan’s Story: Boston Marathon 2014 - A Time To Celebrate and Give Back

This year, Nolan Graham ’03, assistant coach for men’s hockey, and his wife, Crystal, were among the 36,000 marathoners from around the world who qualified for the Boston Marathon.

For Graham, who ran in last year’s race and crossed the finish line nearly 50 minutes before the first bomb went off, running this year had nothing to do with competition.

“The Boston Marathon is the Super Bowl of marathons,” Graham said. “I ran last year, and the feeling of crossing the finish line is phenomenal. My wife and several members of the RPI Hockey staff were there to support me. After the race, we were sitting nearby and we heard an explosion, but nobody really had a handle on what was happening. The explosions sounded like a garbage truck dropping a dumpster.”

Graham said that when they saw people running from the area, they also fled, but they didn’t know what had happened until they returned to their hotel.

No stranger to the rigors of sports, Graham played forward for Rensselaer’s men’s hockey team from 1999 to 2003. A native of Nanaimo, B.C., Graham began running competitively after returning to Troy in 2010. In addition to two consecutive Boston Marathons, Graham has also run in the Hudson Mohawk Marathon and the Beast of Burden Run, a 50-mile ultra marathon in support of Defending the Blue Line, an organization that promotes hockey among children of Armed Service members.

“To be able to participate in this year’s Boston Marathon was even more special, especially knowing that my wife would be running as well,” Graham said. “She’s the humanitarian in the family, and she worked to raise funds to donate to Boston Marathon victims. Returning to Boston was our way of celebrating and giving back.”

Cameron McLean, director of student activities in the Rensselaer Union, has been running since her college days, more than 35 years ago.

“I was never a competitive runner, but it was easy and I was able to complete a distance if I thought about it,” said McLean. “It was fun to do races and meet people, and when I moved to Troy, I joined the Hudson Mohawk Road Runners Club and volunteered at area races. Eventually, I signed up for the Disney World Marathon and completed it in five and a half hours.”

Shortly after, calling it “the race of all races,” the president of the Hudson Mohawk Road Runners Club suggested that McLean ought to run the Boston Marathon. She ran in the 2000 marathon under a non-qualifying number. “It was an amazing race!” McLean said. “I finished in 5:08, and later that year, completed two more marathons.

“Running requires training,” McLean said. “A nice side note to all that training that I was doing is that I met my husband, Mike, who had completed over 30 marathons in his day, so we kept running distances together.”

In December 2006, McLean learned that the vice president of the Class of 2007 had Ewing’s Sarcoma, a form of bone cancer, and would spend the spring semester of his senior year undergoing chemotherapy and radiation treatments. To show her support, McLean asked the club for another non-qualifying number, and ran the Boston Marathon in his honor.

“I was going to go into training while he had his chemo treatments,” McLean said. “It was a cold and snowy winter. One Sunday after a 2-foot snowfall, it was about 18 degrees with wind chills in the negative teens. I thought I might stop – then thought Dennis probably wanted to stop but couldn’t – so I finished that training day.

“I remember we would talk about the differences in our experiences with pain,” McLean said. “He started to follow my training program and became more interested in the sport of running each time talked. I know that it was little relief from all the other stuff in his world. Training became more important to me too. There were many times that I really wished that I could just stop but as long as he couldn’t, I knew that I had to keep going.”

In April 2007, McLean ran the Boston Marathon in a strong Nor’easter, and finished in 5:08. McLean brought Dennis a finisher medal, and together with members of the Class of 2007, they raised $5,000 toward his medical expenses. Dennis passed away in April 2008.

Over the years, McLean has completed six half-marathons, and earned a silver medal in the New York State Empire Games Half-Marathon. She has also completed the Detroit half-marathon, an international race with the only underwater mile split in any race.

“Marathon running teaches you that you can do anything,” McLean said. “I was fortunate to have those times and abilities; I have so many great memories of cities, people, and events. Boston is the most amazing of all.”