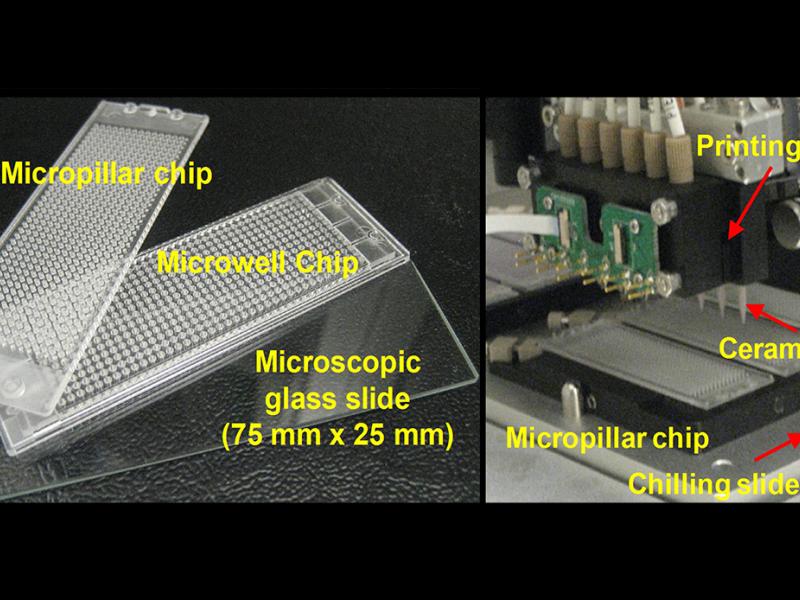 A team of researchers from Rensselaer and partners in academia and industry have developed a new type of biochip that emulates the metabolism of a human liver.

A team of researchers has developed a new type of biochip that emulates the metabolism of a human liver. The device could one day eliminate the need to harvest and use liver cells from human cadavers to test the toxicity of potential new drugs and drug candidates.

The new biochip technology is the result of a collaboration between researchers from Rensselaer Polytechnic Institute, the University of California, Berkeley, Samsung Electro-Mechanics, and Solidus Biosciences Inc. The team’s research findings were published this week in the journal Nature Communications.

See the paper, titled “High-throughput and combinatorial gene expression on a chip for metabolism-induced toxicology screening,” at: http://www.nature.com/ncomms/2014/140506/ncomms4739/full/ncomms4739.html.

Once ingested, food or medicine is chemically transformed, or metabolized, by the human body. The liver plays the major role in this metabolism. An important part of the drug discovery process is testing drug candidates for both efficacy and toxicity. Drug metabolism often results in enhanced toxicity, particularly to the liver. Metabolism-induced toxicity is a common reason why many compounds fail during the drug discovery process.

Generally, this toxicity testing is conducted using human hepatocytes, a major type of liver cell involved in metabolism. “These cells, however, are known to be challenging to work with,” said Jonathan S. Dordick, vice president for research and the Howard P. Isermann Professor at Rensselaer, who helped lead the study. “Because they are harvested from the livers of cadavers, hepatocytes are expensive, delicate, and vary significantly in their metabolic capacity and profile. This variability often results in loss of the predictive capacity of in vitro tests to emulate what happens in the human body,” he said.

The research team’s new biochip, called the Transfected Enzyme and Metabolism Chip, or TeamChip, addresses this widely known and recognized challenge of using hepatocytes for liver toxicity testing. The TeamChip mimics a hepatocyte, but in a manner that is less expensive and more reliable, Dordick said. Additionally, the TeamChip can be fine-tuned to mimic hepatocytes from an individual, which is critical in the development of more personalized drug toxicity assessment, he said.

“Drug discovery is a highly competitive enterprise that requires significant up-front investment and suffers a low success rate,” said Douglas S. Clark, dean of the College of Chemistry and the Gilbert Newton Lewis Professor at UC Berkeley, who led the study with Dordick. “A high-throughput alternative to using human hepatocytes would speed up the testing process and reduce costs, while alleviating the problems related to sourcing the cells from cadavers. The new TeamChip technology is a highly flexible platform that addresses these challenges directly.”

The researchers took immortalized liver cells that lacked the ability to perform metabolism, and used an approach called viral transduction to “infect” these cells with viruses containing specific drug-metabolizing genes that lead to the expression of drug-metabolizing enzymes. Once expressed, these enzymes enable the liver cells to metabolize drugs and drug candidates. The cells can be engineered to express any number of enzymes, all in high-throughput.

Each TeamChip features 532 individual assays that consist of these liver cells. The cells are “printed” onto the chip, each with different combinations and concentrations of viruses. The cells print as a liquid, but then quickly form gelatinous 3-D structures. These 3-D structures are likely to more accurately mimic the conditions within the human body than a flat, 2-D sample, Clark said. Each sample is extremely small, with a volume of only 60 nanoliters.

Once all of the samples have been printed, the chip is incubated for up to three days. Afterward, it is removed from incubation and then analyzed for cell viability. Cells that generate drug candidate metabolites that are toxic result in lower cell viability.

“This technology represents the next level of our previously developed biochip platform,” Clark said. “It enables very effective and efficient use of 3-D cell cultures, in a high-throughput microarray system. It also gives us a simple and reproducible approach to look for the liver toxicity of a particular compound.”

“This technology is a good way to determine, very early on, both the efficacy and the potential toxicity of a drug candidate,” Dordick said. “Having this information as early in the process as possible enables pharma companies to focus their limited resources on pushing forward only the most promising candidates with good efficacy and low toxicity.”

Looking ahead, Dordick said this technology is a step toward the still-distant goal of developing a system that can be personalized to a specific patient. Such a system could mimic the liver of an individual, and test the toxicity of different compounds to their unique physiology, he said.

Dordick and Clark are the co-founders of Solidus Biosciences, which collaborated with Samsung to develop the new TeamChip.

Along with Dordick and Clark, Moo-Yeal Lee, previously a researcher at Solidus and now a faculty member at Cleveland State University, served as a co-leader of the study. In addition, Rensselaer research scientist Seok Joon Kwon; Rensselaer postdoctoral researcher Kusum Solanki; Rensselaer chemical and biological engineering student Dhiral Shah, who has since graduated; Dong Woo Lee, Bosung Ku, and Sang Youl Jeon of Samsung; and Jessica Ryan of Solidus Biosciences were involved in the research.

This research project was funded with support from the National Institute of Environmental Health Sciences, and partial support from Samsung Electro-Mechanics.