Commencement 2014: Service to Their Country 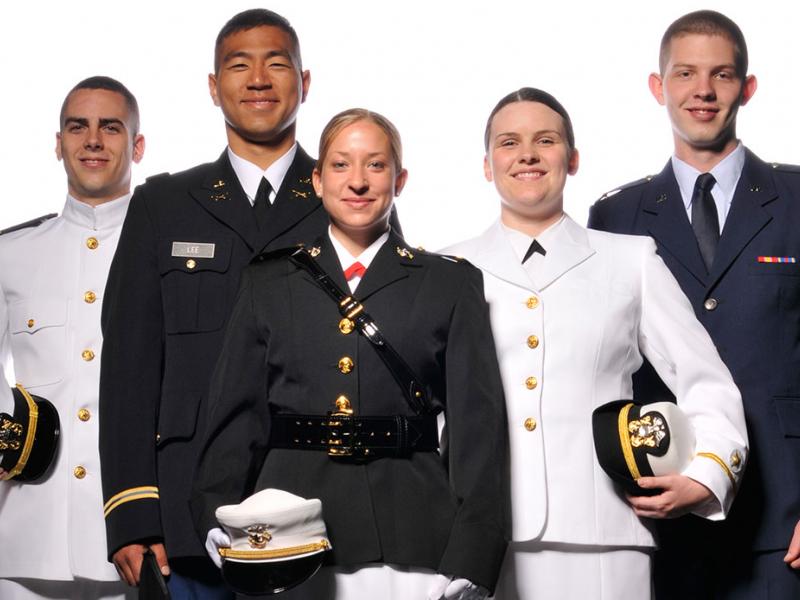 Archival image from 2009 showcasing students from the Reserve Officers Training Corps (ROTC) at Rensselaer. The students graduating from the ROTC program plan to start active military service as officers in the Army, Navy, Marine Corps, and Air Force.

Commencement 2014: Service to Their Country

Troy, N.Y. – The Reserve Officers’ Training Corps (ROTC) programs at Rensselaer Polytechnic Institute are elective programs for students who desire commissions in the United States Armed Forces. This year, 30 students will be graduating from the ROTC program, and starting active military service as officers with the Army, Navy, Marine Corps, and Air Force.

Commissioning signifies the beginning of a student’s active military service. Each student will take an oath of office in his or her respective branch of service in one of three commissioning ceremonies scheduled to take place on Friday, May 23 on the Rensselaer campus in the Curtis R. Priem Experimental Media and Performing Arts Center (EMPAC) Theater and the Center for Biotechnology and Interdisciplinary Studies (CBIS) auditorium.

In the Army, the Mohawk Battalion operates as the Army’s only commissioning source for colleges and universities throughout the Capital Region. This year, five of the 15 graduates who will be commissioned as second lieutenants are from Rensselaer. Of the five Rensselaer commissionees, one will go into active duty, and four will go into the Army Reserve.

Assignment locations for the new lieutenants include: Ft. Benning, Ga.; Ft. Bragg, N.C.; Ft. Drum, N.Y.; Ft. Gordon, Ga.; and Ft. Sill, Okla. The commissioning ceremony for the Rensselaer students will take place on May 23 from 10 to 11 a.m. in the CBIS auditorium.  Jim Knowlton, director of athletics at Rensselaer, will deliver the keynote address. Knowlton is responsible for overseeing the Institute’s 12 men’s and 11 women’s NCAA intercollegiate varsity teams and three junior varsity squads, involving more than 550 student-athletes, as well as intramurals.

Prior to joining Rensselaer, Knowlton served as the director of the Center for Enhanced Performance at the United States Military Academy in West Point, N.Y. Knowlton received a bachelor’s degree in engineering from West Point, and a master’s degree in civil engineering from Cornell University. He returned to West Point in 1992 to teach in the Civil and Mechanical Engineering Department, after which he was selected to lead and manage larger and more complex organizations within the Army, ultimately leading a battalion of 750 men and women while stationed at Ft. Carson, Colo., before deploying to Iraq en route to West Point. Knowlton is a registered professional engineer in the state of Virginia. His military awards and decorations include the Legion of Merit, the Meritorious Service Medal with four oak leaf clusters, the Ranger Tab, the Air Assault Badge, and the Senior Parachutist Badge.

From Naval ROTC, 15 students will be commissioned as ensigns into active duty in the United States Navy. Future career paths for those commissioned include: five surface warfare officers, four submarine officers, five aviation officers, and one naval reactor officer. The commissioning ceremony will take place from 9 to 11 a.m. in the EMPAC Theater.

Rear Admiral Dixon R. Smith will deliver the keynote address. Currently, Rear Admiral Smith serves as Commander, Navy Region Mid-Atlantic. He is a 1983 graduate of the United States Naval Academy and was designated as a surface warfare officer in 1985. Rear Adm. Smith received a master’s degree in business from Webster University and is a graduate of the Army Command and General Staff College at Fort Leavenworth, Kan.

Col (Ret.) Joseph D. Hammer ’90 will deliver the keynote address. Col. Hammer commanded the 103rd Air Operations Group (AOG) from January to September 2013. His group provided strategic and operational battle management for entire air theaters. Prior to the 103rd AOG, Col. Hammer commanded the 103rd Air Operations Squadron (AOS) and oversaw deployments of over 90 airmen in support of contingency operations at the Combined Air and Space Operations Center, as well as supporting over 31 major exercises. He earned distinguished graduate recognition from the Air Operations Center School. Col. Hammer received a bachelor’s degree in management and industrial engineering from Rensselaer; and a master’s degree in business administration with a concentration in marketing strategy and finance from Yale University.

The overall objective of the ROTC program is to develop professional officers who have varied educational backgrounds in major fields of interest and have the professional knowledge and standards needed for future growth. Although the aim in each service is the same, the individual programs differ because of varying responsibilities assigned newly commissioned officers in the three services and differing plans of continuing education.