Rensselaer To Host Conversation With IBM CEO, Father of the World Wide Web, and Renowned Geneticist on May 23 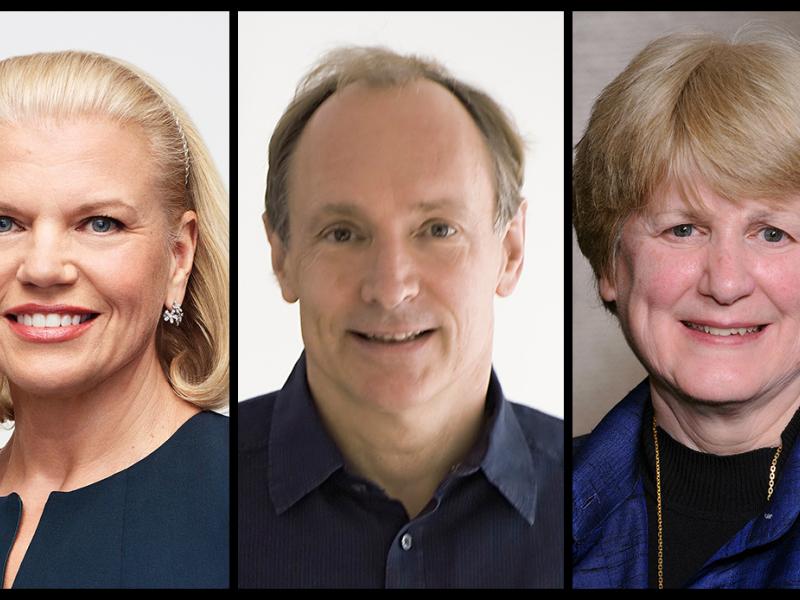 Rensselaer To Host Conversation With IBM CEO, Father of the World Wide Web, and Renowned Geneticist on May 23

Rensselaer Polytechnic Institute on May 23 will convene the 12th annual President’s Commencement Colloquy. The event, unique in higher education, will engage the Institute’s 2014 honorary degree recipients in a discussion titled “Creating Clarity in Complexity to Enable Transformational Change.”

“Data is an extraordinary natural resource, now growing exponentially. It can be transformational if one asks the critical questions, makes the essential connections, and creates the necessary tools to make better decisions and to manage complexity. In each of their arenas, our 2014 Honorary Degree recipients—IBM Chairman, President and CEO Ginni Rometty, father of the World Wide Web Sir Timothy Berners-Lee, and renowned geneticist Dr. Mary-Claire King—have done just that,” President Jackson said. “In the 2014 President’s Commencement Colloquy, we will discuss how each has harnessed the power and potential of data to enable global change.”

The Colloquy will begin at 3:30 p.m. on May 23 in the concert hall of the Curtis R. Priem Experimental Media and Performing Arts Center on the Rensselaer campus. The event is free and open to the Rensselaer community and the general public. If you would like to attend, kindly RSVP at http://www.rpi.edu/colloquy/.

Following is biographical information on the 2014 President’s Commencement Colloquy participants:

Ginni Rometty, B.S., is chairman, president and chief executive officer of IBM. She has held a series of leadership positions in IBM, most recently as senior vice president and group executive, IBM Sales, Marketing and Strategy. She previously served as senior vice president, IBM Global Business Services, where she led the successful integration of PricewaterhouseCoopers Consulting. In prior leadership roles, she served as general manager of IBM Global Services, Americas, as well as general manager of IBM’s Global Insurance and Financial Services Sector. She received a bachelor’s degree with high honors in computer science and electrical engineering from Northwestern University.

Sir Timothy Berners-Lee, B.A., invented the World Wide Web and wrote the first Web client and server. He is the 3Com Founders Professor of Engineering in the School of Engineering with a joint appointment in the Department of Electrical Engineering and Computer Science at the Massachusetts Institute of Technology, where he also heads the Decentralized Information Group. He is also a professor in the Electronics and Computer Science Department at the University of Southampton, UK. He is the director of the World Wide Web Consortium, a Web standards organization, and is director of the World Wide Web Foundation, launched to coordinate efforts to further the potential of the Web to benefit humanity. He graduated with a bachelor’s degree with first honors from The Queen’s College at Oxford University, England.

Mary-Claire King, Ph.D., is the American Cancer Society Professor at the University of Washington in Seattle. She was the first to show that breast cancer is inherited in some families, as the result of mutations in the gene that she named BRCA1. She pioneered the use of DNA sequencing for human rights investigations, developing the approach of sequencing mitochondrial DNA preserved in human remains, then applying this method to the identification of kidnapped children in Argentina and subsequently to cases of human rights violations on six continents. She received her bachelor’s cum laude in mathematics from Carleton College in Northfield, Minn.; her doctoral degree in genetics from the University of California, Berkeley; and her postdoctoral training at the University of California, San Francisco.

Moderated by: Shirley Ann Jackson, Ph.D., is the 18th president of Rensselaer Polytechnic Institute, where she has led an extraordinary transformation since 1999. Described by Time magazine as “perhaps the ultimate role model for women in science,” Dr. Jackson, a theoretical physicist, has held senior positions in government, industry, and research, as well as academe. In 2009, President Barack Obama appointed her to the President’s Council of Advisors on Science and Technology. Before taking the helm at Rensselaer, she was Chairman of the United States Nuclear Regulatory Commission. She serves on the boards of the Smithsonian Institution, the Council on Foreign Relations, the Brookings Institution, the Massachusetts Institute of Technology, and major corporations that include FedEx and IBM.