Meet the Rensselaer Polytechnic Institute Class of 2014: An Overview of the 208th Commencement 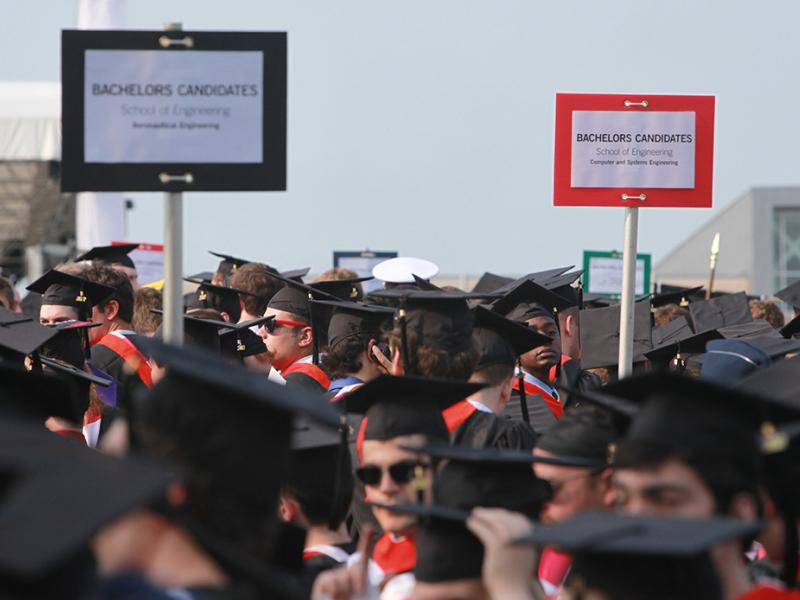 Meet the Rensselaer Polytechnic Institute Class of 2014: An Overview of the 208th Commencement

This spring, 1, 613 students will receive degrees from Rensselaer Polytechnic Institute, on Saturday, May 24, beginning at 8:30 a.m. in the East Campus Athletic Village (ECAV) stadium. They represent the next generation of leaders, engineers, scientists, entrepreneurs, patent holders, game designers, architects, and innovators, in fields ranging from engineering to architecture, fine arts to science, game design to information technology, and business to the military.

During the 208th Commencement Ceremony, Rensselaer will award a total of 1,749 degrees. They include: 163 doctoral degrees, 407 master’s degrees, and 1,179 bachelor’s degrees. Some graduates have earned more than one degree.

In 2014, graduating students come from more than 43 states, in addition to New York. The Class of 2014 contains graduates from 24 other nations, including Canada, China, Colombia, Hong Kong, India, Ireland, Italy, Japan, Taiwan, and Turkey.

The Commencement Speaker Is…

Ginni Rometty, B.S., chairman, president and chief executive officer of IBM, will deliver the 2014 Commencement address. She has held a series of leadership positions in IBM, most recently as senior vice president and group executive, IBM Sales, Marketing and Strategy. She previously served as senior vice president, IBM Global Business Services, where she led the successful integration of PricewaterhouseCoopers Consulting. In prior leadership roles, she served as general manager of IBM Global Services, Americas, as well as general manager of IBM’s Global Insurance and Financial Services Sector. She received a bachelor’s degree with high honors in computer science and electrical engineering from Northwestern University.

Described by Time magazine as “perhaps the ultimate role model for women in science,” Dr. Jackson, a theoretical physicist, has held senior leadership positions in government, industry, research, and academe. Since 1999, Dr. Jackson has led an extraordinary transformation at Rensselaer Polytechnic Institute under an ambitious strategic effort known as The Rensselaer Plan and updated as The Rensselaer Plan 2024.

Class President Michelle Lamberta, a biomedical engineering major, will also address the graduates. The Bayside, N.Y., native has served as Class President for the past two years and plans to pursue a career in the medical device industry in New York City.

Rometty will receive an honorary Doctor of Engineering degree at the ceremony. She will join World Wide Web inventor Sir Timothy Berners-Lee and pioneering geneticist Mary-Claire King, who will participate in the graduation ceremonies and also receive honorary degrees.

Sir Timothy Berners-Lee, B.A., invented the World Wide Web and wrote the first Web client and server. He will receive an honorary Doctor of Science degree. He is the 3Com Founders Professor of Engineering in the School of Engineering with a joint appointment in the Department of Electrical Engineering and Computer Science at the Massachusetts Institute of Technology, where he also heads the Decentralized Information Group. He is also a professor in the Electronics and Computer Science Department at the University of Southampton, UK. He is the director of the World Wide Web Consortium, a Web standards organization, and is director of the World Wide Web Foundation, launched to coordinate efforts to further the potential of the Web to benefit humanity. He graduated with a bachelor’s degree with first honors from The Queen’s College at Oxford University, England.

Mary-Claire King, Ph.D., is the American Cancer Society Professor at the University of Washington in Seattle. She will receive an honorary Doctor of Science degree. She was the first to show that breast cancer is inherited in some families, as the result of mutations in the gene that she named BRCA1. She pioneered the use of DNA sequencing for human rights investigations, developing the approach of sequencing mitochondrial DNA preserved in human remains, then applying this method to the identification of kidnapped children in Argentina and subsequently to cases of human rights violations on six continents. She received her bachelor’s cum laude in mathematics from Carleton College in Northfield, Minn.; her doctoral degree in genetics from the University of California, Berkeley; and her postdoctoral training at the University of California, San Francisco.

All in the Family

The Rensselaer degree is well-known throughout the world as a symbol of technological excellence and achievement. Rensselaer alumni are leaders. They are collaborative, able, and smart. This year, 73 members of the Class of 2014 are Rensselaer “legacies,” students with relatives who attended the university.

Dean Nieusma, associate professor of science and technology studies in the School of Humanities, Arts, and Social Sciences, has been selected as the 40th recipient of the David M. Darrin ’40 Counseling Award, which will be presented during Commencement. The award was established by David M. Darrin ’40 to recognize a faculty member who has made an unusual contribution in the counseling of undergraduate students. The selection of the award recipient is made by Phalanx, Rensselaer’s student leadership honorary society.

This year, more than 10,000 graduates and visitors are expected to attend the ceremony. In 2009, the Institute officially unveiled ECAV. The facility represents the most extensive athletic construction project in Rensselaer history, offering athletic and recreation facilities that have changed the student experience dramatically. The $92 million complex is the latest in a decade long physical transformation of Rensselaer. Beginning in 1950, Commencements were held in the Houston Field House. In 1999, due to the increasing number of graduates, the ceremony was held at the Pepsi Arena (now the Times Union Center) in downtown Albany, where it was held for the next few years. In 2002, Rensselaer planned to hold Commencement on Harkness Field; however, a late May snowfall of 2.2 inches forced the planned outdoor Commencement inside to the Houston Field House. Weather permitting, the ceremony has been held outdoors on the Harkness Field since 2003, until the move to ECAV in 2010.

***Please Note: All numbers and facts include Troy campus students and degrees issued in August and December 2013. This information does not include the Rensselaer Hartford campus.  All of the numbers cited are estimated as of May 19, 2014, and are subject to change up until Commencement.