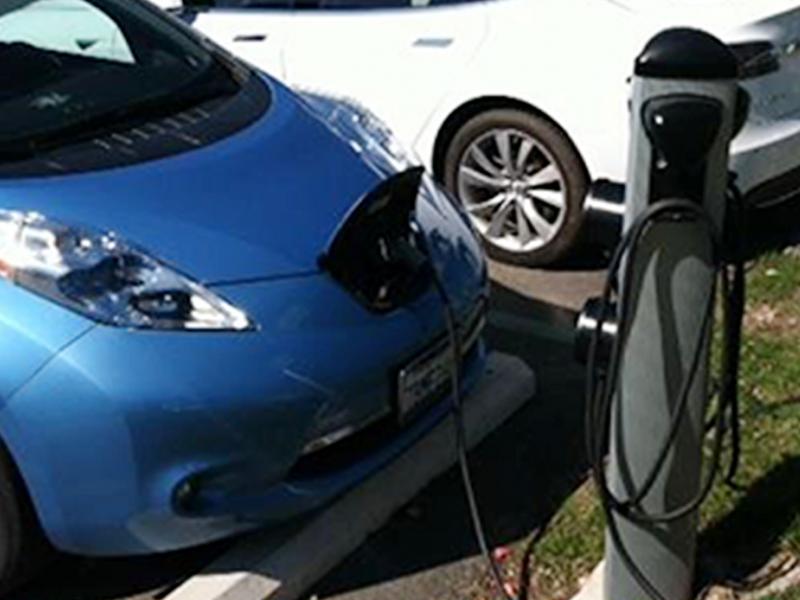 Rensselaer offers electric vehicle charging in the “B” parking lot located at ECAV to guests that contact Parking and Transportation Services in advance of the exercises.

A Look at How Rensselaer Is Supporting the Environment, Electric Vehicle Charging, and the Local Community

For Commencement, a green, sustainable mindset has picked up tremendous momentum on the Rensselaer Polytechnic Institute campus over the past four years.

Beginning in 2010, in support of Institutewide sustainability efforts and after consulting with students, the Rensselaer  Bookstore changed the bachelor’s and master’s graduation regalia that would be used for Commencement. The regalia features caps and gowns that are made from 100 percent post-consumer plastic bottle pellets. The regalia, supplied by Oak Hall Cap and Gown, is known as the “GreenWeaver” style.

“According to the organization, it takes an average of 23 bottles to make each gown, so just think, for every 100 students wearing GreenWeaver, that’s 2,300 plastic bottles being diverted from landfills,” said Traci Griffin, acting director of the Rensselaer Bookstore. Other regalia features include tagless size labels stamped with soy milk, and a reduction in the carbon dioxide gas emissions by more than 54 percent in the process of manufacturing fabric from plastic versus virgin polyester.

“In addition, the plastic bags used to store the caps and gowns are made from recycled plastic, Griffin said. “The 2013 Commencement season helped convert 17 million plastic bottles into ‘GreenWeaver’ gowns. To date the program has resulted in the reuse of 36.5 million plastic bottles (nationally). Following Commencement, the used regalia can be turned in to the Rensselaer Bookstore for recycling, which will be used to create new fabric.

To cut down on the carbon footprint from transferring guests between the events and parking facilities, Rensselaer will use 15 hybrid-electric CDTA buses, along with four propane buses. This effort means that 80 percent of the passenger fleet that is used during Commencement to transport nearly 10,000 guests and graduates over an eight-hour period is operating on alternative fuels. Furthermore, Rensselaer is on track to have a 100 percent sustainable fleet for Commencement 2015 by adding five more propane buses to their operation. Jones also noted that Rensselaer offers electric vehicle charging in the “B” parking lot located at ECAV to guests that contact Parking and Transportation Services in advance of the exercises.

Hospitality Services at Rensselaer, provided by Sodexo Campus Services, plays a large role in sustainability on the Rensselaer campus and more than 900 other higher education institutions in the U.S. The taste for new and original fare has changed campus dining at Rensselaer. Today, a plethora of delectable meal options that includes ethnic cuisines, made-to-order restaurant-style meals, themed meals, guest chef nights, and various specialty desserts — often using local and organic ingredients — can now be found across the campus.

According to Matt Mueller, general manager for Hospitality Services, there are several sustainability initiatives planned for this year’s Commencement that will help to support the local economy and community. For example, the annual Commencement barbecue will include nearly 3,900 pounds of meat and veggie burgers, hotdogs, and sausage, along with all of the necessary condiments. The 13,000 hamburger and hot dog buns used for the event are locally made at Freihofer’s Bakery.

The Rensselaer Bake shop will serve up 3,500 brownies and 6,500 Commencement cookies, and attendees will also get to enjoy 6,500 locally made ice cream novelties from the Gillette Creamery, a local family-owned and operated company. In addition, Hospitality Services will use Aspretto, a 100 percent fair trade certified coffee. The sustainable coffee program, launched three years ago, is also available in all the resident dining halls

During the 2013-2014 school year, Hospitality Services launched a composting campaign in the Resident Dining program by partnering with Empire Zero waste. They collect an average of 4000 lbs. a week of pre and post-consumer food waste which is delivered to local composting facilities. In addition, Hospitality Services discontinued the use of trays in several of the dining facilities to reduce food waste, water and energy usage.

In addition, the dinner plates, napkins, and utensils are produced with a combination of recycled material and plant enzymes to aid in composting breakdown. Hospitality Services also plans to recycle all cans, bottles, plastic table covers, and aluminum food service pans. Following the barbecue, they will arrange to distribute any remaining food items to area food pantries.