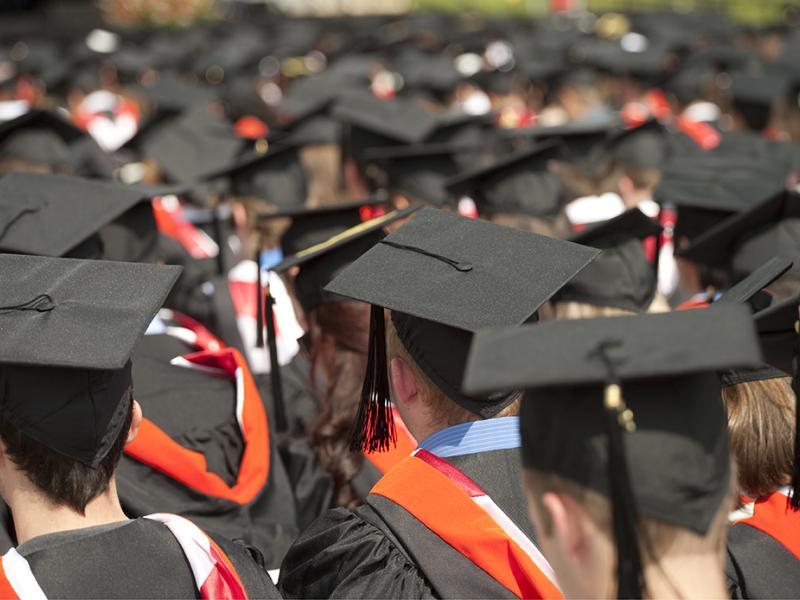 During the May 22 “Zero Year” Reunion Brunch, several graduating seniors were honored for their contributions to the Rensselaer Polytechnic Institute.

While at Rensselaer, Morton has been involved with supporting the Rensselaer Union Program and Activities Committee (UPAC) organizations for most of his time at Rensselaer. He has served as an equipment chairperson for UPAC Lights, and a student worker in the Curtis R. Priem Experimental Media and Performing Arts Center (EMPAC) under the direction of a master technician. Morton is also a member of the American Society of Mechanical Engineers; Tau Beta Pi, the national engineering honor society; and Pi Tau Sigma, the national mechanical engineering honor society. He was also inducted into the Phalanx Honor Society, which honors student leadership, service, and devotion to the university. In addition, while serving as an Engineering Ambassador, Morton has carved out time to serve develop and deliver education outreach presentations in science, technology engineering, and math (STEM) for students in area high schools. He is also a member of the National Eagle Scout Association, serving as an assistant Scoutmaster, and was inducted into the Order of the Arrow, Scoutings National Honor Society.

Mowatt has been a familiar face in the Rensselaer Union since his early years. Currently, he is one of the chief student managers in the Club House Pub, but he has also been affiliated with several multicultural student organizations at Rensselaer: including, Alianza Latina where he is serving as president and served as past vice president; the African Caribbean Student Association, and the Turkish Student Association. Mowatt is also a member of the Society of Hispanic and Professional Engineers, and serves as the recruiting understudy for the organization. He has also worked as a robotics mentor for the Center for Initiatives in Pre-College Education (CIPCE) at Rensselaer.

The Leopold L. Balleisen Prize, honoring a senior student athlete who has won a varsity letter in at least one sport during two undergraduate years and who stands highest academically in the senior class, was awarded to Grace Tilton, an aeronautical engineering major from Concord, N.H. While at Rensselaer, the three-season varsity athlete has served as a member of the women’s indoor track team, cross country track and field, and swim team. During the 2013-2014 cross country season, she served as team captain. Of special note, she came in first place during the Liberty League Meet, and also set a personal record, a school record and a New York State Association record in the mile at the NCAA Championship Meet, finishing fourth in a time of 4:56.01 to earn National All-America.

In working with Riccardo Bevilacqua, assistant professor in the Department of Mechanical Aerospace and Nuclear Engineering, Tilton received the prestigious Barry M. Goldwater Scholarship in March 2013. The goal of the scholarship is to provide a continuing source of highly qualified scientists, mathematicians, and engineers by awarding scholarships to college students who intend to pursue careers in these fields. The scholarship— the most prestigious undergraduate award given in the sciences— is awarded to about 300 college sophomores and juniors nationwide. Tilton was one of only 71 engineering majors in the country to receive the award. She also received the Founders Award of Excellence from Rensselaer. The award was established to honor students who embody qualities of creativity, discovery, leadership, and the values of pride and responsibility at Rensselaer. Tilton is also a member of the Tau Beta Pi, the national engineering honor society.

The Livingston W. Houston Citizenship Award, honoring the “first citizen of the college,” ranking high in character, leadership, scholarship, and athletic ability, was awarded to Brock Higgs, a business and management major from Kingston, Ontario. Rensselaer student-athlete Brock Higgs has been a stalwart in the community since arriving on campus. He has assisted local youth hockey teams of the Troy Albany Youth Hockey Association (TAYHA) with practices and he has been a counselor at the Rensselaer Hockey Camp every fall. Higgs has also participated in Habitat for Humanity, helping to build houses in the City of Troy.  Each fall, Higgs and his teammates also assist the Rensselaer Newman Center with their fundraising activities to support other causes charitable events, including the City of Troy's Turkey Trot, the United Way and the American Cancer Society's Relay for Life.

Higgs also was selected as the recipient of the 2014 Men's Hockey Senior CLASS Award. The award, chosen by a nationwide vote of Division I men's hockey coaches, national hockey media and fans, is given annually to the most outstanding senior student-athlete in Division I men's hockey. To be eligible for the award, a student-athlete must be classified as an NCAA Division I senior and have notable achievements in four areas of excellence – classroom, community, character, and competition. In August, Higgs will receive his master's degree in management, with a concentration in finance, from Rensselaer.