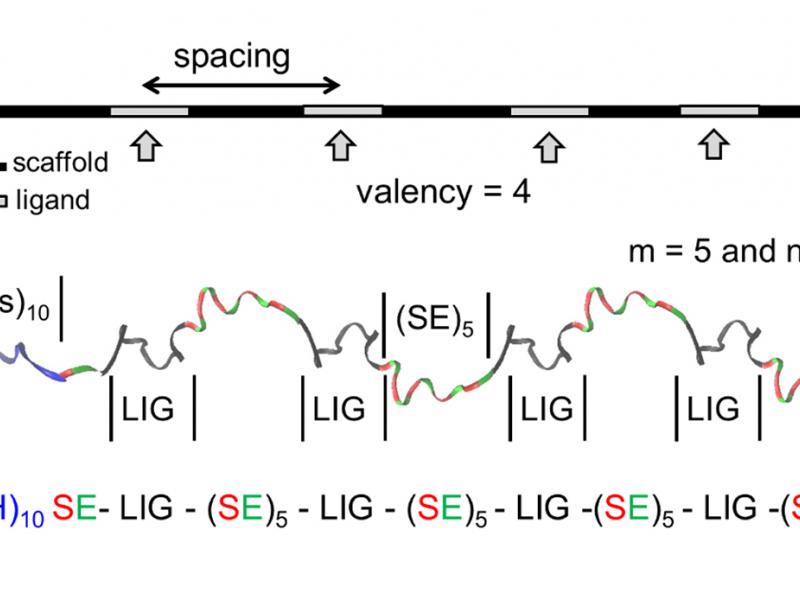 The research team, led by Ravi Kane, the P. K. Lashmet Professor at Rensselaer, designed a new approach to precisely control the molecular properties of protein therapeutics that inhibit the potency and deadliness of anthrax toxin. Unlike antibiotics, these engineered molecules do not attack bacteria. Instead, the inhibitors block specific binding sites on anthrax toxin and prevent the toxic enzymes from entering target cells.

Anthrax toxin, secreted by the anthrax bacterium, is made of proteins and toxic enzymes that bind together to inflict damage to a host organism. Even if antibiotics are used to treat an anthrax bacterial infection, the secreted anthrax toxin continues to spread and do damage. As a result, Kane and other researchers have been investigating methods for preventing anthrax toxin from entering cells.

Kane and his colleagues have been designing polyvalent molecules, in which multiple copies of active peptides are attached to a polymer chain. These polyvalent molecules can demonstrate significantly more inhibitory activity than free monomeric peptides. The effectiveness of previous approaches was limited, however, because the peptide ligands were attached randomly across the polymer chain, and the number of ligands varied from chain to chain. Both parameters have a major impact on the functionality of the overall inhibitor.

“To really understand how these inhibitor molecules work,” said Kane, “we need to be able to control valency independent of spacing, and end up with inhibitors that are molecularly uniform.”

To accomplish this, Kane and the researchers employed protein and genetic engineering techniques to create polypeptide inhibitors with uniform ligand spacing and valency.

“As a result, we can now systematically control all of these properties, and tune them in order to influence the activity of the inhibitor molecules,” Kane said. The research team developed inhibitors of anthrax toxin that were over 10,000 times more potent than the monomeric peptide.

This work, funded by the U.S. National Institutes of Health (NIH), could be broadly applicable to inhibit toxins and pathogens, Kane said. His research group is currently looking at how to use this technique to develop inhibitors for the human immunodeficiency virus (HIV).

A manuscript based on the study, entitled “Design of Monodisperse and Well-Defined Polypeptide-Based Polyvalent Inhibitors of Anthrax Toxin,” was published online April 6 by the journal Angewandte Chemie International Edition. See the paper at: http://ow.ly/wiOjG

Kane is a faculty member of the Department of Chemical and Biological Engineering (CBE) at Rensselaer. This research took place in the Rensselaer Center for Biotechnology and Interdisciplinary Studies (CBIS).

This research was supported by the NIH National Institute of Allergy and Infectious Diseases under grant number U01AI056546 and the NIH National Institute of Biomedical Imaging and Bioengineering under grant number R01EB015482. The content is solely the responsibility of the authors and does not necessarily represent the official views of the NIH.