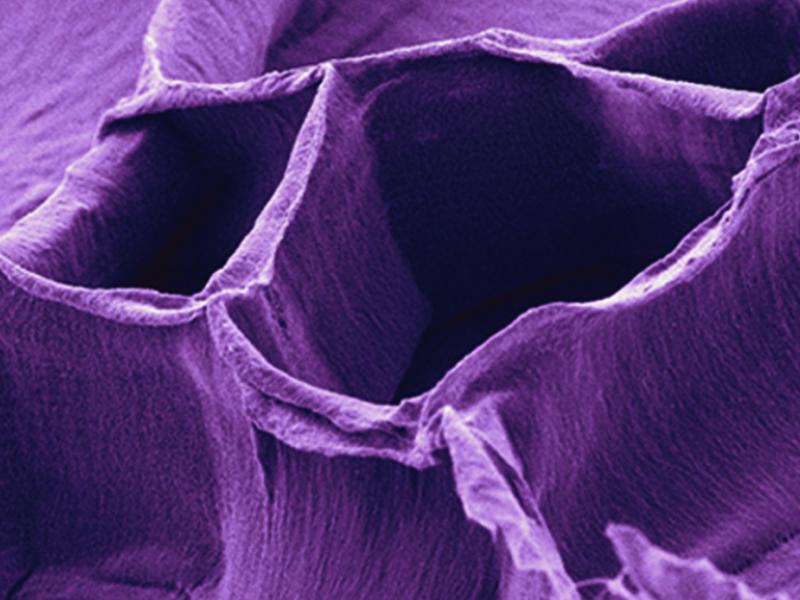 Why Do Fossil Fuels Have So Much Carbon Stored in Them?
Rensselaer Creates Course Program Focused on Training in Micro and Nanofabrication Cleanroom Technology
Rensselaer Researcher Awarded NASA Space Biology Grant for Work Focused on Spaceflight Stressors
Moveable Robotic Platform Could Be the Future of Retail
RPI professor designs computer system to eliminate plane delays
June 2, 2014

The semiconductor industry has long manipulated materials like silicon through the use of pressure, a strategy known as “strain engineering,” to improve the performance of transistors. But as the speed of transistors has increased, the limited speed of interconnects – the metal wiring between transistors – has become a barrier to increased computer chip speed. The published research paper, “Pressure Enabled Phonon Engineering in Metals,” opens the door to a new variant of strain engineering that can be applied to the metal interconnects, and other materials used to conduct or insulate electricity.

“We looked at a fundamental physical property, the resistivity of a metal, and show that if you pressurize these metals, resistivity decreases. And not only that, we show that the decrease is specific to different materials – aluminum will show one decrease, but copper shows another decrease,” said Nicholas Lanzillo, a doctoral candidate at Rensselaer Polytechnic Institute and lead author on the study. “This paper explains why different materials see different decreases in these fundamental properties under pressure.”

The research involved theoretical predictions, use of a supercomputer, and experimentation with equipment capable of exerting pressures up to 40,000 atmospheres (nearly 600,000 pounds per square inch). It was made possible through a collaboration between three Rensselaer professors – Saroj Nayak, a professor of physics, applied physics, and astronomy; Morris Washington, associate director of the Center for Materials, Devices, and Integrated Systems and professor of practice of physics, applied physics, and astronomy; and E. Bruce Watson, Institute Professor of Science, and professor of earth and environmental sciences and of materials science and engineering – with a diverse mix of disciplinary backgrounds and skill sets. Jay Thomas, a senior research scientist in Watson’s lab, was primarily responsible for designing the complex experiments detailed in the paper.

When an electrical current is applied to metal, electrons travel through a lattice structure formed by the individual metal atoms, carrying the current along the wiring. But as an electron travels, it is impeded by the normal collective vibration of atoms in the lattice, which is one of the factors that leads to electrical resistance. In physics, the vibration is called phonon, and the resistance it creates by coupling with electrons is known as electron-phonon coupling, a quantum mechanical feature that amplifies strongly at the atomic scale.

Lanzillo and Nayak, his doctoral adviser, said earlier research using the Center for Computational Innovations – the Rensselaer supercomputer – showed that electron phonon coupling varies depending on the scale of the wiring: nanoscale wire has typically higher resistance than ordinary size, or “bulk,” wiring.

The researchers wanted to conduct experiments to confirm their findings, but doing so would have required making atomic-scale wires, and measuring the electron-phonon coupling as a current passed through the wire, both difficult tasks. Then they saw an alternative, based on the observation that atoms were closer together in the atomic scale lattice than in bulk lattice.

“We theorized that if we compress the bulk wire, we might be able to create a condition where the atoms are closer to each other, to mimic the conditions at the atomic scale,” said Nayak.

They approached Watson and Washington to execute an experiment to test their finding.

Washington and Nayak have long collaborated through the New York State Interconnect Focus Center at Rensselaer, which researches new material systems for the next generation of interconnects in semiconductor integrated circuits with a strong interest in interconnects at dimensions of less than 20 nanometers. Existing experimental data indicated that the resistivity of copper – the current preferred interconnect material – increases as the wiring size dips below 50 nanometers. One goal of the center is to suggest materials and structures for integrated circuit interconnects smaller than 20 nanometers, which often involves fabricating and characterizing experimental thin film structures with the resources of the Rensselaer Micro and Nano Fabrication Clean Room. With this background, Washington was critical to coordinating the experimental research.

To pressurize the metals, the group turned to Watson, a geochemist who routinely subjects materials to enormous pressures to simulate conditions in the depths of the Earth. Watson had never experimented with the electrical properties of metal wires under pressure – a process that posed a number of technical challenges. Nevertheless, he was intrigued by the theoretical findings, and he and Thomas worked together to design the high-pressure experiments that provided information on the electrical resistivity of aluminum and copper at pressures up to 20,000 atmospheres.

Working together, the team was able to demonstrate that the theoretical calculations were correct.

“The experimental results were vital to the study because they confirmed that Saroj and Nick’s quantum mechanical calculations are accurate – their theory of electron-phonon coupling was validated,” said Watson. “And I think we would all argue that theory backed up by experimental confirmation makes the best science.”

The authors said the research offers a new and exciting capability to predict the response of the resistivity to pressure through computer simulations. The research demonstrates that changes in resistivity can be achieved in thin film nanowires by using strain in combination with existing semiconductor wafer fabrication techniques and material. Because of this work, the physical properties and performance of a large number of metals can be further explored in a computer, saving time and expense of wafer fabrication runs.

Lanzillo said the results are a complete package.

“We can make this prediction with a computer simulation but it’s much more salient if we can get experimental confirmation,” said Lanzillo. “If we can go to a lab and actually take a block of aluminum and a block of copper and pressurize them and measure the resistivity. And that’s what we did. We made the theoretical prediction, and then our friends and colleagues in experiment are able to verify it in the lab and get quantitatively accurate results in both.”

Funding for the research was partially supported by the National Science Foundation Integrative Graduate Education in Research and Traineeship (IGERT) Fellowship, Grant No. 0333314, as well as the Interconnect Focus Center (MARCO program) of New York state. Computing resources provided by the Center for Computational Innovations at Rensselaer, partly funded by the state of New York.