Ready for Takeoff: Gearing Up for An Out-of-This-World Summer Camp Experience 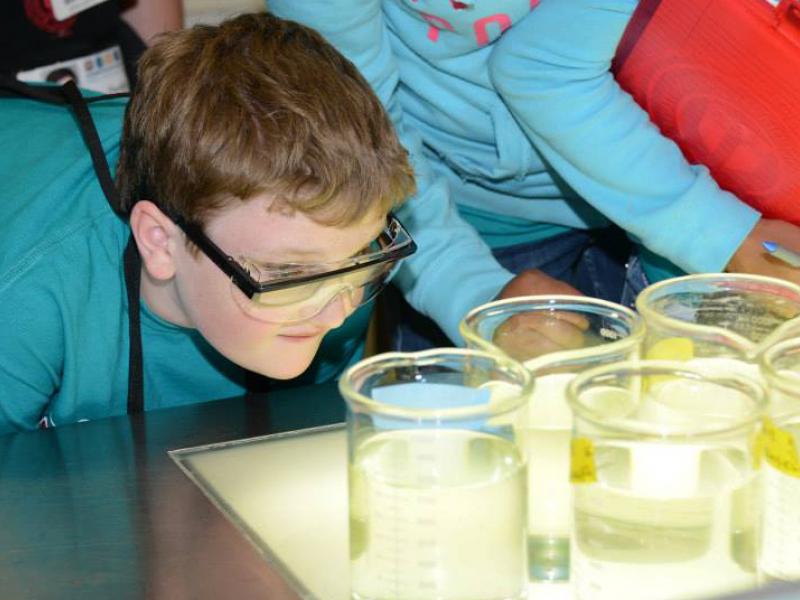 Ready for Takeoff: Gearing Up for An Out-of-This-World Summer Camp Experience

This summer, 48 area middle school students are curing the summer “brain drain” with a heavy dose of science, technology, engineering, and mathematics (STEM) fun at the ExxonMobil Bernard Harris Summer Science Camp hosted by Rensselaer Polytechnic Institute. The program offers the team of budding scientists and engineers an exciting opportunity to work alongside professionals and a former NASA astronaut while experiencing life on a college campus.

From June 22 to July 4, the students will be involved in a series of hands-on, team-based learning activities designed to reveal the science behind the latest technology, increase their environmental awareness, and explore how math impacts daily life.

“At Rensselaer, we understand the important role STEM programs such as these play in preparing students for the high-tech careers of tomorrow,” said Cynthia Smith ’96, assistant dean of students at Rensselaer, director of pipeline initiatives and partnerships, and the director of the ExxonMobil Bernard Harris Summer Science Camp. “Over the years, we have seen incredible enthusiasm and interest from our campers, sparked by the opportunity they have to see science and math at work in the community through the exciting interactive experiments, field excursions, and the core curriculum taught by our highly qualified and motivated teachers.”

Overall, 1,000 middle school students have been selected to attend one of 20 camps held at universities across the country where they will be immersed in hands-on STEM learning. The program, supported by the ExxonMobil Foundation, includes mentoring from camp founder Bernard A. Harris Jr., the first African-American to walk in space. “From building models of bridges to designing robots and creating spacesuits, students see firsthand engineering, science, technology, and math come alive through real-world applications,” said Harris, who also serves as president of The Harris Foundation.

Throughout the camp, students will live on campus and participate in interactive, inquiry-based classes taught by Rensselaer faculty, secondary teachers, and other professionals. Campers also have the opportunity to explore local museums, nature centers, and ecosystems as a way to discover science at work in the community.

In addition, as part of the program, students will focus on investigating the origins of life on Earth and the conditions that have led to the formation of habitable planets in our own and other solar systems through the New York Center for Astrobiology, which is based within the School of Science. Led by Douglas Whittet, center director and professor of physics at Rensselaer, the interdisciplinary center – a member of the NASA Astrobiology Institute – brings together researchers from multiple fields of study at Rensselaer as well as collaborators from other institutions around the country. The center is a partnership between Rensselaer and the University at Albany, Syracuse University, the University of Arizona, and the University of North Dakota.

The program also provides students with an exciting way to put the STEM skills learned to the test. On Friday, June 27, as part of the program’s curriculum, students will participate in the Mars Lander Challenge, a space-themed competition inspired by Harris.  Using household materials, teams of students will design model spacecraft capable of protecting an astronaut during a planetary landing.

Students will also hear from local professionals about rewarding career options in growing STEM fields. Science and engineering jobs are projected to expand at more than double the rate of the entire U.S. labor force through 2018, according to a recent STEMconnector® report.

This is the seventh year that Rensselaer has been selected to participate in the program. “Rensselaer was selected this year as a camp host because of its long-standing commitment to math and science education, and its efforts to support and promote local community youth in these disciplines,” Smith said. Rensselaer also received $80,000 from the Harris Foundation to support the program.

Since 2006, more than 8,700 underserved students have participated in this program. According to a 2013 Harris Foundation study of camp alumni currently enrolled in college, 96 percent credit the program with influencing their decision to pursue higher education, and 86 percent plan to pursue a STEM-related career.

“Working with middle school students who love science, technology, math, and engineering is a distinct privilege, and Rensselaer is honored to continue to help prepare these students for success in achieving their dreams,” Smith said.