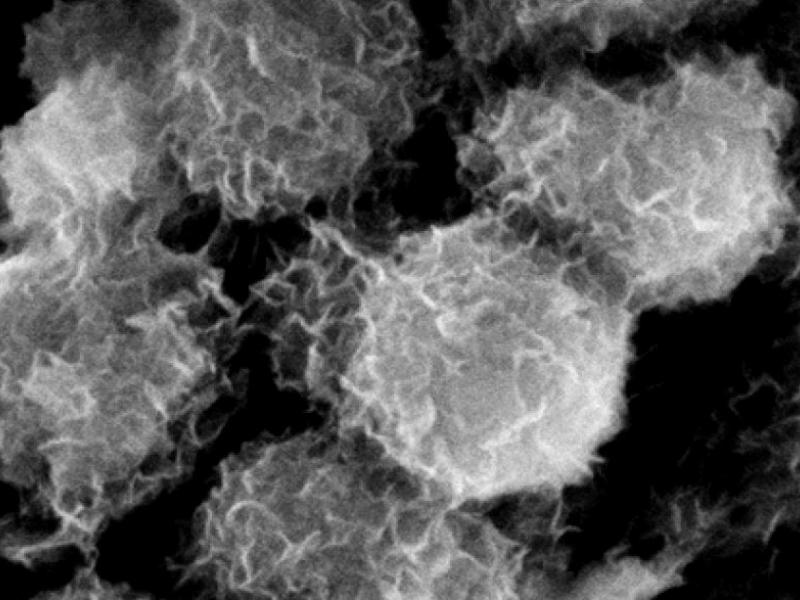 Lithium-ion batteries power our phones, laptops, and many other portable electronic devices. There are limitations inherent in current lithium-ion technology, however, that prevent the batteries from being used more widely in electric vehicles and other high-power applications.

A team of researchers at Rensselaer Polytechnic Institute has developed a new material that addresses two of these limitations. Led by Jie Lian, associate professor in the Department of Mechanical, Aerospace, and Nuclear Engineering, the team recently detailed its discovery in the journal Nature Communications.

One limitation is mechanical in nature. As the battery charges, lithium ions diffuse into the anode structure and cause it to physically expand. When discharging, as the battery is being used, lithium ions depart the anode structure and cause it to revert to its original size. The stress from these volume changes can result in damage to the battery, which generally leads to a significant loss in the amount of energy it can hold.

Another limitation is chemical. As the liquid electrolyte molecules in lithium-ion batteries react with the electrons and lithium ions, the molecules decompose and form a solid-electrolyte interface (SEI) layer on the negative electrode surface. The SEI consumes lithium ions and impedes their ability to move through the battery. To make matters more challenging, the SEI layer is known to crack as the battery’s anode grows and shrinks, and then re-forms. This repetition can result in the formation of ever-thicker, increasingly prohibitive SEI layers, which negatively impact the performance and shorten the lifespan of the battery.

The use of nanomaterials can help alleviate the mechanical limitation of lithium-ion technology in several ways; for example, by providing a thick forest of nanowires or nanorods in which the lithium ions can diffuse. But because of their larger surface area, these nanomaterials are more susceptible to SEI formation.

To attack the problem of both mechanical and chemical degradation, Lian and the researchers designed and developed an electrode from cobalt oxide mesoporous nanospheres. Shaped like tiny soccer balls with holes scattered across their surface, the hollow spheres suffer severe mechanical and chemical degradation and lose most of their energy storage capability. However, Lian and the research team discovered that, after many charge-discharge cycles, the hollow nanospheres are refined, reactivated, and eventually demonstrate unprecedented performance for a battery.

How did this transformation happen? The expansion and retraction of the nanospheres causes their pores to become larger over time. The refined structure of the nanospheres enabled the creation of a thin, stable SEI on their surfaces. Instead of cracking and reforming, the SEI simply expands and contracts in concert with the sphere. The perpetually thin SEI ensures lithium ions can quickly and efficiently diffuse in the electrode, and the reactivated electrode does not lose capacity even after thousands of charge-discharge cycles at a high charge rate.

The electrodes developed by Lian and the research team showed no loss in capacity after 7,000 cycles at a high charge/discharge rate of more than 5C.

Results of the study, titled “High-rate lithiation-induced reactivation of mesoporous hollow spheres for long-lived lithium-ion batteries,” were published on July 31 by the journal Nature Communications. See the paper at: http://go.nature.com/YLSNjV

This research was supported by the National Science Foundation.