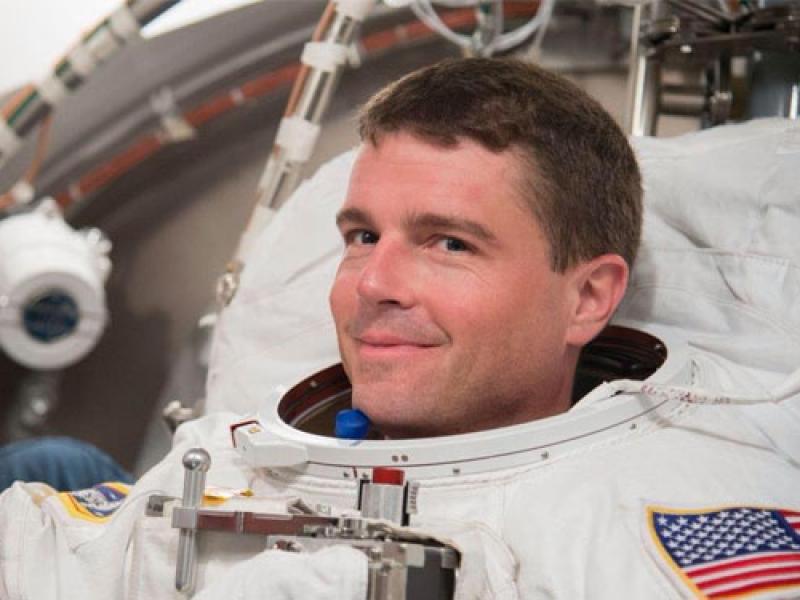 Rensselaer in Space: Live From the International Space Station with G. Reid Wiseman ’97 Event To Be Held October 10 at EMPAC

Troy, N.Y. – Rensselaer Polytechnic Institute alumni will gather from across the country and around the world Oct. 9-12 at their alma mater to connect with fellow Rensselaer graduates. One alumnus, though, will be making a very special connection to the Reunion & Homecoming weekend festivities.

Reid Wiseman ’97, a NASA astronaut currently stationed aboard the International Space Station (ISS), is scheduled to join the Rensselaer reunion festivities via video call for a special conversation with fellow alumni at 3 p.m. Friday, Oct. 10, in the concert hall of the Curtis R. Priem Experimental Media and Performing Arts Center (EMPAC). Wiseman will talk about the current state of the space program, give insight into daily life on the ISS, and reflect on the ways his Rensselaer education put him on a path toward his ultimate career ambition – space travel.

“Reid is on an incredible adventure, and he has brought us all along for the ride of a lifetime. Through his breathtaking photos and insightful tweets, he has shared his passion for exploration, wonder at the powerful beauty of nature, and keen understanding of our place in the universe,” said Rensselaer President Shirley Ann Jackson. “Rensselaer has a nearly 200 year history of alumni/ae who have changed the world, and Reid is doing that, and more.  Not only is he helping to advance the state of the space program, but also – through his use of social media – he is helping to change the way we see the world.”

Wiseman graduated from Rensselaer in 1997 with a bachelor’s degree in computer and systems engineering. He went on to earn a master’s degree in systems engineering at Johns Hopkins University and then attended the U.S. Naval Test Pilot School. As a naval aviator, Wiseman flew numerous assignments around the world before his selection to NASA’s astronaut corps in 2009.

He has been aboard the ISS since May and has developed a huge social media following thanks to the stunning photos and wry observations about life in microgravity that he shares on Twitter.

“This event will be a once-in-a-lifetime opportunity for Rensselaer alumni to listen to one of their own give a firsthand account of life aboard the International Space Station,” said Jeff Schanz, assistant vice president for Alumni Relations/Institute Advancement at Rensselaer and the executive director of the Rensselaer Alumni Association. “We are so honored to host this celebration of the past, present, and future of the space program and the many contributions Rensselaer alumni have made to it.”

In addition to the conversation with Wiseman, the event will feature remarks by President Jackson on the extraordinary impact Rensselaer has had on the space program throughout history.

Cynthia Collins, a professor of chemical and biological engineering, will also give a talk during the event about her recent NASA-funded research. In 2010 and 2011, Collins sent experiments into orbit aboard the space shuttle Atlantis and discovered that bacterial biofilms grown in space behave in ways never before observed on Earth. Collins’ findings, published in PLOS ONE, represent a key step toward understanding and mitigating the risk these bacteria may pose to astronauts during long-term space flights, like future missions to Mars.

In addition to having astronauts on the most recent two space missions, members of the Rensselaer community are actively involved in the Mars Rover mission; many alumni were directly involved in the Apollo missions including George M. Low ’48, a past president of Rensselaer who directed the Apollo, Mercury, and Gemini programs, and John Swigert ’65, the command pilot who helped to guide the ill-fated Apollo 13 back to Earth; and many Rensselaer alumni are working to shape missions of the future.