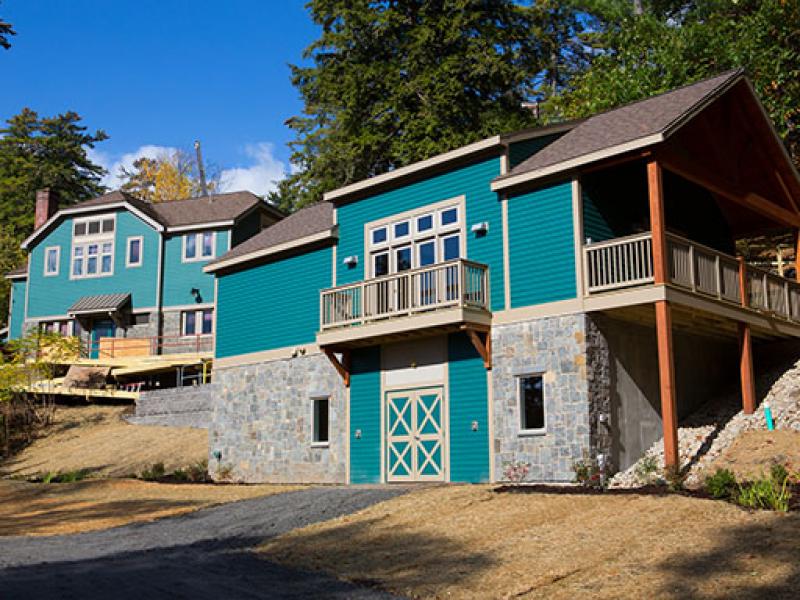 The Data Visualization Laboratory was built to support the Jefferson Project at Lake George – a groundbreaking collaboration between Rensselaer, IBM, and The FUND for Lake George that is bringing together ecologists, hydrologists, computer scientists, environmental advocates, and experts in cyber infrastructure and other fields to gain an unprecedented understanding of the complex systems that operate within and around Lake George.

Advanced sensors are being placed throughout the lake that will collect massive amounts of data about the lake, the way water flows into and circulates throughout it, and the plants and animals that live in it. That data will be streamed into the new Data Visualization Laboratory in real-time for analysis. The 2,000-square-foot laboratory features advanced computing and graphics systems to display massive data on a high-resolution display “wall.”

“Future generations, who share our love of Lake George and its surrounds, will look back on this day as a turning point, when, as a result of the generosity and vision of the Kelly family and the support of IBM, we are enabled to develop a new scientific model for environmental stewardship through collaborative research using leading-edge technologies,” said Rensselaer President Shirley Ann Jackson in announcing the gift to establish a Data Visualization Laboratory at the Darrin Fresh Water Institute. “This transformative gift reflects John’s dedication as a Rensselaer trustee, his commitment as a research partner, and the passion that he and Helen Jo share for preserving that which makes Lake George so special.”

“RPI and Lake George have been important parts of my — and my family’s —  life,” said John Kelly. “We are pleased to be able to endow such a technologically advanced laboratory in support of the Jefferson Project, thereby helping to preserve Lake George for future generations.”

Kelly serves as senior vice president and director of research for IBM.  In this role, he is responsible for leading IBM’s most advanced research into areas such as big data computation and analytics, to solve the world's most complex problems.

Throughout Kelly’s more than 30-year career with IBM, he has been instrumental in forging a strong corporate partnership between IBM and Rensselaer. IBM has supported Rensselaer in a number of key projects including the establishment of the Center for Computational Innovations, the partnership on the IBM Watson system, and most recently the Jefferson Project at Lake George.