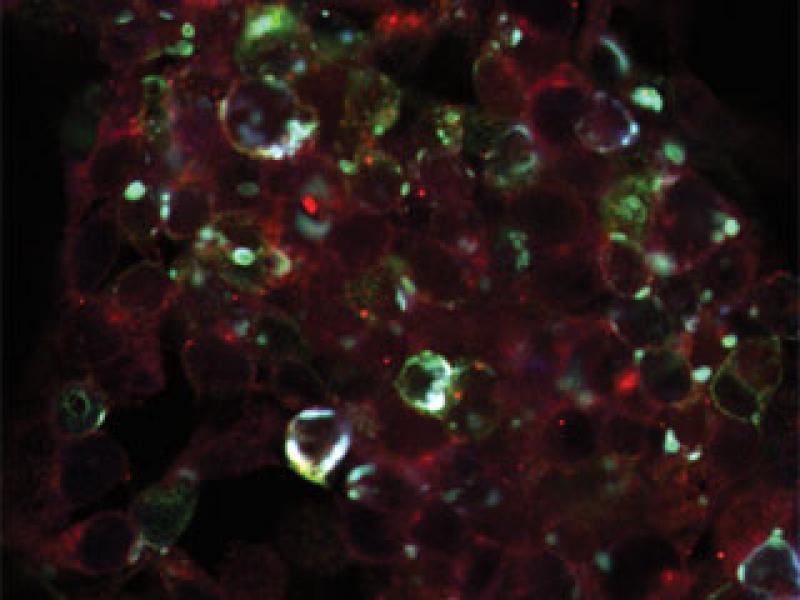 Researchers experimented with different configurations for their remote control system, and they found the best relies on an iron nanoparticle (blue), which is tethered by a protein (green) to an ion channel (red). Above, all three appear within cell membranes.

Space travel is heating up—and so are rocket fuel emissions. These companies are developing cleaner alternatives to protect earth first
Why Do Fossil Fuels Have So Much Carbon Stored in Them?
Rensselaer Creates Course Program Focused on Training in Micro and Nanofabrication Cleanroom Technology
Rensselaer Researcher Awarded NASA Space Biology Grant for Work Focused on Spaceflight Stressors
Moveable Robotic Platform Could Be the Future of Retail
December 15, 2014

Troy, N.Y. — It’s the most basic of ways to find out what something does, whether it’s an unmarked circuit breaker or an unidentified gene — flip its switch and see what happens. New remote-control technology may offer biologists a powerful way to do this with cells and genes. A team at Rensselaer Polytechnic Institute and Rockefeller University is developing a system that would make it possible to remotely control biological targets in living animals — rapidly, without wires, implants, or drugs.

In a technical report published today in the journal Nature Medicine, the team describes successfully using electromagnetic waves to turn on insulin production to lower blood sugar in diabetic mice. Their system couples a natural iron storage particle, ferritin, to activate an ion channel called TRPV1 such that when the metal particle is exposed to a radio wave or magnetic field, it opens the channel, leading to the activation of an insulin-producing gene. Together, the two proteins act as a nano-machine that can be used to trigger gene expression in cells.

“The use of a radiofrequency-driven magnetic field is a big advance in remote gene expression because it is non-invasive and easily adaptable,” said Jonathan S. Dordick, the Howard P. Isermann Professor of Chemical and Biological Engineering and vice president for research at Rensselaer Polytechnic Institute. “You don’t have to insert anything — no wires, no light systems — the genes are introduced through gene therapy. You could have a wearable device that provides a magnetic field to certain parts of the body and it might be used therapeutically for many diseases, including neurodegenerative diseases. It's limitless at this point.”

Dordick, Ravi Kane, the P.K. Lashmet Professor and head of Chemical and Biological Engineering, within the Rensselaer Center for Biotechnology and Interdisciplinary Studies, and doctoral student Jeremy Sauer collaborated with Rockefeller colleagues Jeffrey Friedman, Rensselaer Class of 1977, and Sarah Stanley on the project.

Other techniques exist for remotely controlling the activity of cells or the expression of genes in living animals. But these have limitations. Systems that use light as an on/off signal require permanent implants or are only effective close to the skin, and those that rely on drugs can be slow to switch on and off.

The new system, dubbed radiogenetics, uses a signal, in this case low-frequency radio waves or a magnetic field, to activate ferritin particles. They, in turn, prompt the opening of TRPV1, which is situated in the membrane surrounding the cell. Calcium ions then travel through the channel, switching on a synthetic piece of DNA the scientists developed to turn on the production of a downstream gene, which in this study was the insulin gene.

In an earlier study, the researchers used only radio waves as the “on” signal, but in the current study, they also tested out a related signal – a magnetic field – that could also activate insulin production. They found it had a similar effect as the radio waves.

“The method allows one to wirelessly control the expression of genes in a living animal and could potentially be used for conditions like hemophilia to control the production of a missing protein. Two key attributes are that the system is genetically encoded and can activate cells remotely and quickly,” says Friedman, co-senior author on the project and the Marilyn M. Simpson Professor and head of the Laboratory of Molecular Genetics at Rockefeller. “We are now exploring whether the method can also be used to control neural activity as a means for noninvasively modulating the activity of neural circuits.”