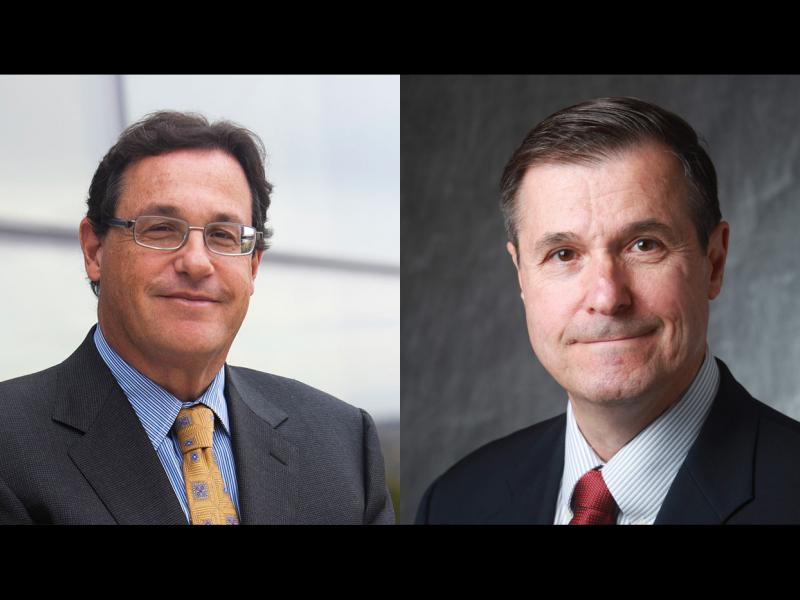 Two innovative researchers at Rensselaer Polytechnic Institute have been named fellows of the National Academy of Inventors (NAI).

Rensselaer Professor Robert Linhardt and Vice President for Research Jonathan Dordick, both renowned for their leadership and excellence in biotechnology research, were among the distinguished group of 170 individuals elected as NAI fellows.

The recognition is reserved for academic inventors “who have demonstrated a prolific spirit of innovation in creating or facilitating outstanding inventions that have made a tangible impact on quality of life, economic development, and the welfare of society,” according to the NAI.

Fellows were nominated by their peers, and nominees must be a named inventor on at least one patent issued by the U.S. Patent and Trademark Office (USPTO) and must be affiliated with a university, nonprofit research institute, or other academic entity.

Linhardt and Dordick will be recognized at an induction ceremony in March at the NAI annual conference in Pasadena, Calif. As part of the honor, they will receive a trophy, medal, and rosette pin.

Dordick has published more than 330 journal papers on these and other topics, and he holds 34 patents related to his research. He is the co-founder of several companies, including EnzyMed (now a part of Albany Molecular Research Inc.), Solidus Biosciences, and The Paper Battery Company. He currently serves on the scientific advisory board of several biotechnology companies and venture capital firms.

Robert Linhardt is the Ann and John H. Broadbent Jr. `59 Senior Constellation Professor of Biocatalysis and Metabolic Engineering at Rensselaer. He holds appointments in the departments of Chemistry and Chemical Biology, Biology, Biomedical Engineering, and the Howard. P. Isermann Department of Chemical and Biological Engineering. He joined Rensselaer in 2003 after 21 years on the faculty of the University of Iowa.

Linhardt is internationally known for his research on the study of bioactive carbohydrates, particularly the complex polysaccharide heparin. Heparin is a major clinical anticoagulant with more than 500 million doses used worldwide each year. Heparin and related molecules exhibit a large number of newly discovered biological activities and have great therapeutic potential. Linhardt and his collaborators were the first to create a synthetic form of heparin, which aims to be a safer, purer alternative to conventional heparin sourced from animal intestines. Linhardt’s other research interests include techniques to advance new drug development, new biological therapeutics, implantable medical devices, and glycomic screening.

Linhardt has published more than 675 research papers and holds 50 patents. Among his many honors and recognitions are the 2010 Melville L. Wolfrom Award and the 2003 Claude S. Hudson Award from the American Chemical Society, being named among the “Scientific American 10” in 2009, the Volweiler Research Achievement Award in Pharmaceutical Sciences in 1999, and the Horace S. Isbell Award from the Carbohydrate Division of the American Chemical Society in 1994. He is a fellow of the American Association for the Advancement of Science.

An active contributor to professional publications, Linhardt has served on the editorial boards of top journals including the Journal of Biological Chemistry, Applied Biochemistry and Biotechnology, and the Carbohydrate Polymers. He is also the co-founder The Paper Battery Company.