Making a Difference in a Global Community: Engineers Without Borders and the Trip to Panama 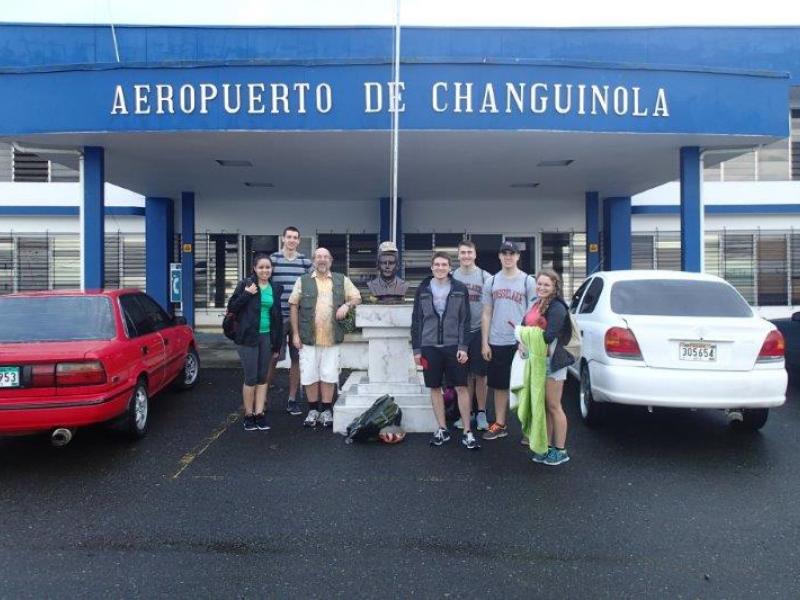 Making a Difference in a Global Community: Engineers Without Borders and the Trip to Panama

Troy, N.Y. — While most of the campus was dealing with frigid temperatures during the winter break, eight members of the Rensselaer Polytechnic Institute student chapter of Engineers Without Borders-USA traveled to the remote Panamanian island of Isla Popa II to construct a centralized rainwater catchment and treatment system for the island’s native Ngäbe people. Without access to a reliable source of potable drinking water, most community members on the island drink and cook with harvested rainwater contaminated with coliform bacteria.

Engineers Without Borders is a nonprofit club of the Rensselaer Union and chapter of the larger national organization of the same name. It is focused on making a difference in the lives of communities around the world. For nearly five years, a strong collaborative bond has been formed between the island residents and the Rensselaer organization when community leaders initially reached out to EWB-USA eager to improve sanitation and health. Overall, student groups have taken four trips to the island, primarily for “assessment” purposes.

“Traveling to Panama with EWB-RPI was a life-changing experience for me,” said Tom Rebbecchi ’16, a materials science and engineering major who serves as the organization’s professional liaison, and is the former vice president. Rebbecchi, who hails from Cherry Hill, N.J., noted that the trip to Panama was his first time out of the country.

“After three years of involvement with the project, it was amazing to finally experience the culture of the Ngäbe people firsthand by living on Isla Popa II for over a week,” Rebbecchi said. “I was proud to apply my engineering knowledge to deliver a system that will improve the lives of countless people. During construction of our system, I was happy to learn more efficient construction techniques from the men in the community. From long days of work in the mud with my teammates to hiking through rainforests, the experiences I gained during this trip will stay with me for the rest of my life. EWB-RPI’s work is great for students who want the opportunity to engage in engineering service work and have the opportunity to travel.”

According to Rebbecchi, the January trip served as the initial “implemention” trip that was critical in determining the success of the team’s designs and earning the respect of the community members.

Over the last five years, many Rensselaer engineering students have contributed to the system design and logistics for the international project. To meet the needs of the over 100 children who attend school on the island, the EWB-RPI water catchment system employs two 600-gallon rainwater collection tanks elevated on wooden stands that collect the ample rainwater that falls on the expansive roof of a communal pavilion. While this type of rainwater harvesting method is commonly practiced in the community, most families fail to elevate their collection tanks with properly braced stands, which would allow for less contamination by animals and easier accessibility to collected water.

The two-pronged solution for water purification involves a first-flush system that diverts contaminated water from roof debris away from the collection tank and the use of stand-alone, bucket-based biosand filters. Construction of the detailed systems required transportation of over 6,000 pounds of materials to the remote island by boat, a logistical feat, according to EWB members who coordinated the effort.

After the EWB-RPI team arrived on Isla Popa II with a barge-load of construction materials, a meeting was held with the leaders in the community to seek their approval of designs. The student engineers were able to teach community members about proper water-system design principles so that they could better understand best practices for future community-based water and sanitation projects. Paralleling the mission statement of EWB-USA, the group prioritized the need for community engagement, collaboration, and education.

The Rensselaer team members worked alongside five community members to construct the rainwater harvesting system over the course of an eight-day span. When faced with building challenges imposed by the hardness of the native lumber, the group was excited to learn alternate construction techniques from the Ngäbe men.

“With trust founded on a four-year relationship with the community, we were able to effectively collaborate with the community’s members to deliver a much-appreciated water system that will provide clean water to over 100 children each day,” Rebbecchi said.

The group’s biosand filters, first prototyped and tested on Rensselaer campus, were constructed for use in the school. Guides for building the inexpensive filters were left with the community to encourage families to create their own for use in homes.

Prior to leaving the green rainforests, lush mangroves, and picturesque waterfront community of Isla Popa II, EWB members assessed potential future implementation sites, and they also were presented with a small financial contribution from the community residents toward the cost of construction materials to demonstrate their stake in the project. Members will soon begin monitoring the implemented systems and following up with community members to gain their feedback, with plans to continue the longstanding partnership with the members of Isla Popa II.

“When I first returned from Panama and my family and friends asked me what I remembered most from my trip, all I could think of was mud,” said Anna Thonis ’17, a dual major in environmental science and sustainability studies, who serves as president of Engineers without Borders.  “Then I started thinking about the fact that as much as living without showers, without power, and with a surplus of mud seemed like something I would be inclined to do again, I also realized that if someone said to me ‘Come to this remote island in Panama and help us construct a rain-water catchment system and some bio-sand filters,’ that I would agree to go instantly , because I know that I simply being a part of a group such as Engineers without Borders changes the way you think about life.”

“Beyond the trip, the experience helps you to think on the global scale, and increases your desire to want to help people more and more every day,” Thonis said. “I encourage people to look into the hundreds of EWB projects that take place throughout the world, and I would love for more RPI students to consider joining the RPI chapter of EWB.  And if not EWB, then simply join any program that strives to help people on at the international level because RPI students have a lot to offer and their knowledge and heart can make a huge difference.”

To read more about the previous trip to Panama in spring 2013, visit: http://news.rpi.edu/luwakkey/3163

If you are interested in supporting and learning more about the Engineers Without Borders Panama Water Project efforts through this year’s WeR Gold alumni fundraiser, visit: http://ewb.union.rpi.edu