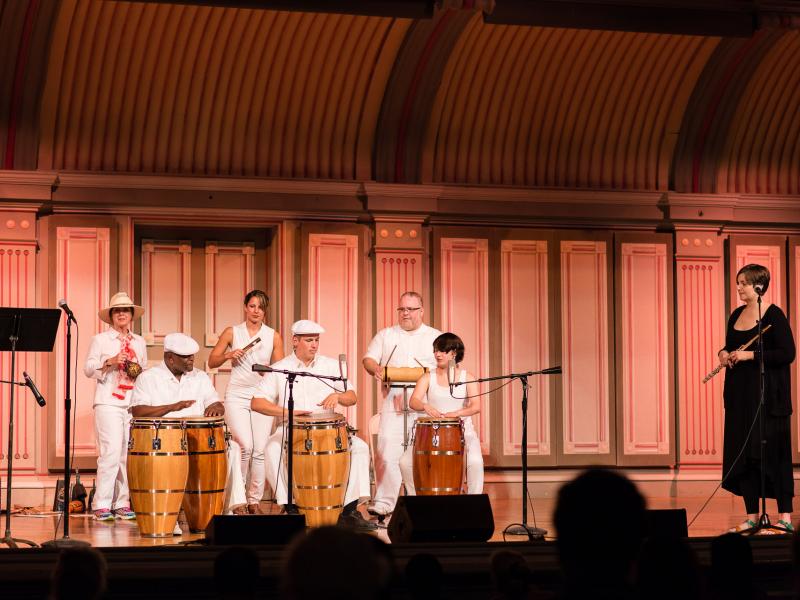 Archival photo. Ensemble Congeros & Roots of Africa, led by Ade Knowles, professor of practice in the School of Humanities, Arts, and Social Sciences during a performance at Troy Savings Bank Music Hall.

Troy, N.Y. – Throughout the month of February, in honor of Black History Month, across the Rensselaer Polytechnic Institute campus, several Rensselaer Union student organizations have been offering a host of cultural, intellectual, social, film, and performance-based programs for members of the campus and local community.

“The primary goal in organizing the Black History Month programming was focused on encouraging collaboration among groups of student organizations to develop programming that would create awareness and celebrate the important contributions made by African-Americans within the campus community and beyond,” said Cameron McLean, director of student activities in the Rensselaer Union.

On Friday, Feb. 27, members of the campus and local community are invited to attend the “Selma Discussion on Civil Rights Then and Now,” which will be held in the Darrin Communications Center, room 318, beginning at 6 p.m. The program, hosted by the Rensselaer Union Speakers Forum, will provide individuals with an opportunity to talk about the civil rights movement and parallels between what happened then and what is going on in the United States today.

Following the discussion, UPAC Cinema will host screenings of the film Selma, which chronicles Martin Luther King’s campaign to secure equal voting rights via an epic march from Selma to Montgomery, Alabama, in 1965. Screenings are scheduled for 7 p.m., 9:30 p.m. and midnight in the Darrin Communications Center, room 308. All viewings will be free to individuals with a Rensselaer ID, and $2.50 for other attendees.

As the month draws to a close, on Saturday, Feb. 28, members of the campus are invited to a reception to honor several artists who are part of the Shelnutt Gallery show “Art & Soul Abstractions.” The reception will take place from 2:30 to 6 p.m. in the Shelnutt Gallery, room 3606. The program will also feature a special performance by Ensemble Congeros & Roots of Africa, led by Ade Knowles, professor of practice in the School of Humanities, Arts, and Social Sciences. The show is co-sponsored by the Black Students’ Alliance.

The final program for the month will be presented by UPAC Concerts on Saturday, Feb. 28. Mirk is an American musical group from Albany that was founded in 2009. The group will take over the Mother’s stage in the Rensselaer Union to showcase their musical style, which is characterized as a cross between the genres of pop, soul, R&B, and hip-hop. The program will begin at 8 p.m.

Earlier in the month, programs planned included “Small Talk at 15th and Sage,” which featured special guest J. Ivy, a Grammy Award-winning performance poet, author, and motivational speaker. The program was hosted by members of the Alpha Phi Alpha fraternity, with support from the Black Students’ Alliance and the Union Speakers Forum. In addition, the National Society of Black Engineers hosted a series of educational sessions on topics related to cultural appropriation, breaking barriers, and the Marva Collins story.

In addition, members of the campus had an opportunity to celebrate the history and culture of the Gullah people, who according to historians were direct descendants of slaves who worked the rice plantations on the coastal islands off the shores of South Carolina and Georgia, by attending a special brown bag luncheon hosted by the Rensselaer Union.  The event includes a presentation by Lucinda Grant Griffin, director of the Office for People With Developmental Disabilities, along with a sample food tasting, and a fun language lesson.

“As our students strive to become the leaders of tomorrow, CLASS helps them develop the intellectual agility, multicultural sophistication, and global awareness that will enable them to change the world,” McLean said. “This year, the various offerings planned help to connect students to a network of faculty, staff, and other students, ensuring that they are part of a strong community of learners.”