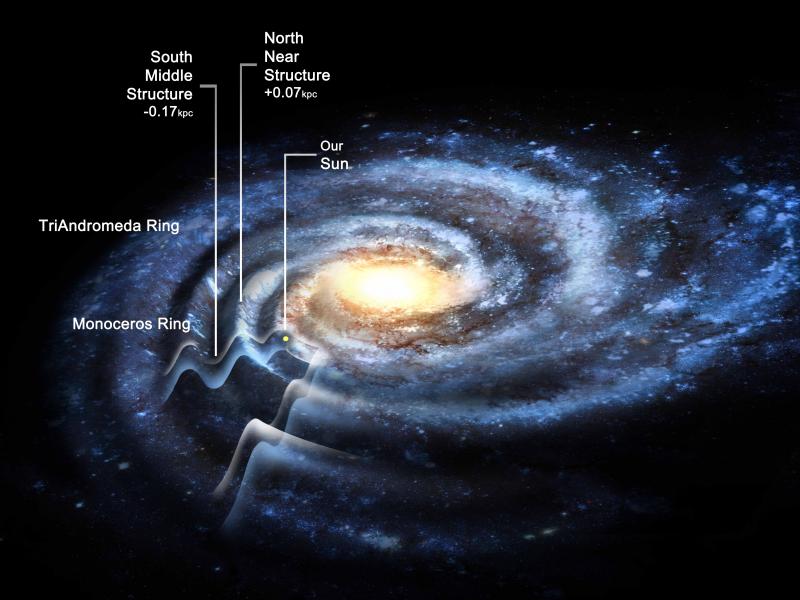 Medical Imaging Expert Ge Wang Honored by International Society for Optics and Photonics
Organic Materials in Martian Meteorite Formed by Interactions Between Water and Rock
Rensselaer Scholars To Build and Test Prototype To Monitor Water Quality for Nitrogen
Cryptocurrency is volatile, yes. But is it just a trend, or here to stay?
Rensselaer Student Awarded Computing Scholarship
March 11, 2015

The Milky Way galaxy is at least 50 percent larger than is commonly estimated, according to new findings that reveal that the galactic disk is contoured into several concentric ripples. The research, conducted by an international team led by Rensselaer Polytechnic Institute Professor Heidi Jo Newberg, revisits astronomical data from the Sloan Digital Sky Survey which, in 2002, established the presence of a bulging ring of stars beyond the known plane of the Milky Way.

“In essence, what we found is that the disk of the Milky Way isn’t just a disk of stars in a flat plane—it’s corrugated,” said Heidi Newberg, professor of physics, applied physics, and astronomy in the Rensselaer School of Science. “As it radiates outward from the sun, we see at least four ripples in the disk of the Milky Way. While we can only look at part of the galaxy with this data, we assume that this pattern is going to be found throughout the disk.”

Importantly, the findings show that the features previously identified as rings are actually part of the galactic disk, extending the known width of the Milky Way from 100,000 light years across to 150,000 light years, said Yan Xu, a scientist at the National Astronomical Observatories of China (which is part of the Chinese Academy of Science in Beijing), former visiting scientist at Rensselaer, and lead author of the paper.

“Going into the research, astronomers had observed that the number of Milky Way stars diminishes rapidly about 50,000 light years from the center of the galaxy, and then a ring of stars appears at about 60,000 light years from the center,” said Xu. “What we see now is that this apparent ring is actually a ripple in the disk. And it may well be that there are more ripples further out which we have not yet seen.”

The research, funded in part by the National Science Foundation and titled “Rings and Radial Waves in the Disk of the Milky Way,” was published today in the Astrophysical Journal. Newberg, Xu, and their collaborators used data from the Sloan Digital Sky Survey (SDSS) to show an oscillating asymmetry in the main sequence star counts on either side of the galactic plane, starting from the sun and looking outward from the galactic center. In other words, when we look outward from the sun, the mid-plane of the disk is perturbed up, then down, then up, and then down again.

“Extending our knowledge of our galaxy’s structure is fundamentally important,” said Glen Langston, NSF program manager. “The NSF is proud to support their effort to map the shape of our galaxy beyond previously unknown limits.”

The new research builds upon a 2002 finding in which Newberg established the existence of the “Monoceros Ring,” an “over-density” of stars at the outer edges of the galaxy that bulges above the galactic plane. At the time, Newberg noticed evidence of another over-density of stars, between the Monoceros Ring and the sun, but was unable to investigate further. With more data available from the SDSS, researchers recently returned to the mystery.

“I wanted to figure out what that other over-density was,” Newberg said. “These stars had previously been considered disk stars, but the stars don’t match the density distribution you would expect for disk stars, so I thought ‘well, maybe this could be another ring, or a highly disrupted dwarf galaxy.”

When they revisited the data, they found four anomalies: one north of the galactic plane at 2 kilo-parsecs (kpc) from the sun, one south of the plane at 4-6 kpc, a third to the north at 8-10 kpc, and evidence of a fourth to the south 12-16 kpc from the sun. The Monoceros Ring is associated with the third ripple. The researchers further found that the oscillations appear to line up with the locations of the galaxy’s spiral arms. Newberg said the findings support other recent research, including a theoretical finding that a dwarf galaxy or dark matter lump passing through the Milky Way would produce a similar rippling effect. In fact, the ripples might ultimately be used to measure the lumpiness of dark matter in our galaxy.

“It’s very similar to what would happen if you throw a pebble into still water – the waves will radiate out from the point of impact,” said Newberg. “If a dwarf galaxy goes through the disk, it would gravitationally pull the disk up as it comes in, and pull the disk down as it goes through, and this will set up a wave pattern that propagates outward. If you view this in the context of other research that’s emerged in the past two to three years, you start to see a picture is forming.”

The research was funded by the NSF, as well as the Chinese National Science Foundation and the National Basic Research Program of China.

Newberg currently researches the structure and evolution of our own galaxy, using stars as tracers of the galactic halo and disks. These stars in turn are used to trace the density distribution of dark matter in the Milky Way. She has been a participant of the Sloan Digital Sky Survey and is currently head of participants in LAMOST U.S., a partnership allowing U.S. astronomers to take part in a survey of more than 7 million stars by the Large Sky Area Multi-Object Fiber Spectroscopic Telescope in China (LAMOST).

Read a publicly available version of the research article

Watch a 50-minute video explaining the findings in greater detail

High-resolution illustrations of the research are available on Newberg's homepage