Supporting STEM and Recycling: The Ultimate Robotics Competition That Celebrates Science and Technology 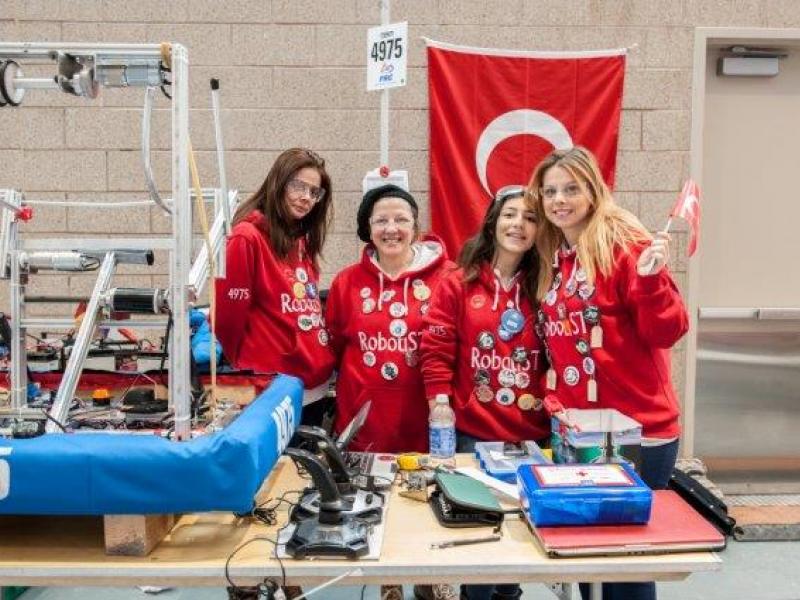 Supporting STEM and Recycling: The Ultimate Robotics Competition That Celebrates Science and Technology

Troy, N.Y. – It’s all about robots, 3,000 pounds of metal, gears and electronics, and recycling. Get ready to see the ultimate display of science, mathematics, and technology in action as 36 teams of high school students put their robots to the test and compete in the New York Tech Valley FIRST® (For Inspiration and Recognition of Science and Technology) Robotics Competition hosted by Rensselaer Polytechnic Institute from March 19 to 21.

This year, 1,800 students representing teams from the Capital Region, as well as teams from New York state, Connecticut, New Jersey, Maryland, Pennsylvania, and an international team from Canada will participate in the regional event. Students will be supported by hundreds of teachers, industry and college mentors, and parents who will converge on the East Campus Athletic Village at Rensselaer for two days of matches.

“FIRST Robotics Competitions really bring the excitement of a sporting event to science and technology via robotics,” said Paul Schoch, associate professor in the Rensselaer Electrical, Computer, and Systems Engineering Department and director of the university’s Center for Initiatives in Pre-College Education (CIPCE).

“The competition is as close to real-world engineering as a student can get,” Schoch said. “Students are engaged, inspired, and excited to participate in science and technology – a mindset that will last long after the competition and put them on a path to a successful career and bright future.” Schoch received the 2014 Woodie Flowers Award, which celebrates effective communication in the art and science of engineering and design. It was founded in 1996 to recognize mentors who lead, inspire, and empower using excellent communication skills.

Overall, 75,000 high school students from the United States and around the globe will compete in this year’s competition. This year’s FIRST game, titled RECYCLE RUSHSM, is a recycling-themed game played by two alliances of three robots each. Robots score points by stacking totes on scoring platforms, capping those stacks with recycling containers, and properly disposing of pool noodles, representing litter. In keeping with the recycling theme of the game, all game pieces used are reusable or recyclable by teams in their home locations or by FIRST® at the end of the season.

Prior to the competition, during a six-week time frame, students worked with professional engineering mentors to design a robot that solved a problem using a standard kit of parts and set of rules. Once the young inventors created the robot, their teams participated in competitions that measured the effectiveness of each robot, the power of collaboration, and the determination of students.

“As New York continues to grow its clean-tech economy under Governor Cuomo, building STEM skills in our future workforce is both important and necessary to ensure that businesses continue to have access to skilled employees,” said John B. Rhodes, president and CEO, NYSERDA. “This instructive and entertaining event is one way that New York's students can enhance their hard-science skills while having fun and preparing for the next generation of highly-technical jobs.”

This season, participating FIRST students are also eligible to apply for more than $20 million in scholarships from 150 scholarship providers.

The New York Tech Valley Regional competition is one of four FIRST regional competitions in New York state and one of 100 regional events taking place across the country this month. Winners for design excellence, sportsmanship, teamwork, and more will advance to the FIRST championship competition in St. Louis, Missouri, in April.

Accomplished inventor Dean Kamen founded FIRST (For Inspiration and Recognition of Science and Technology) in 1989 to inspire an appreciation of science and technology in young people. Based in Manchester, New Hampshire, FIRST designs accessible, innovative programs to build self-confidence, knowledge, and life skills while motivating young people to pursue opportunities in science, technology, and engineering. With support from over 200 of the Fortune 500 companies and more than $19 million in college scholarships, the not-for-profit organization hosts the FIRST Robotics Competition (FRC) for students in Grades 9-12; FIRST Tech Challenge (FTC) for Grades 7-12; FIRST LEGO League (FLL) for Grades 4-8; and Junior FIRST LEGO League (Jr.FLL) for Grades K-3. Gracious Professionalism is a way of doing things that encourages high-quality work, emphasizes the value of others, and respects individuals and the community. To learn more about FIRST, go to www.usfirst.org.