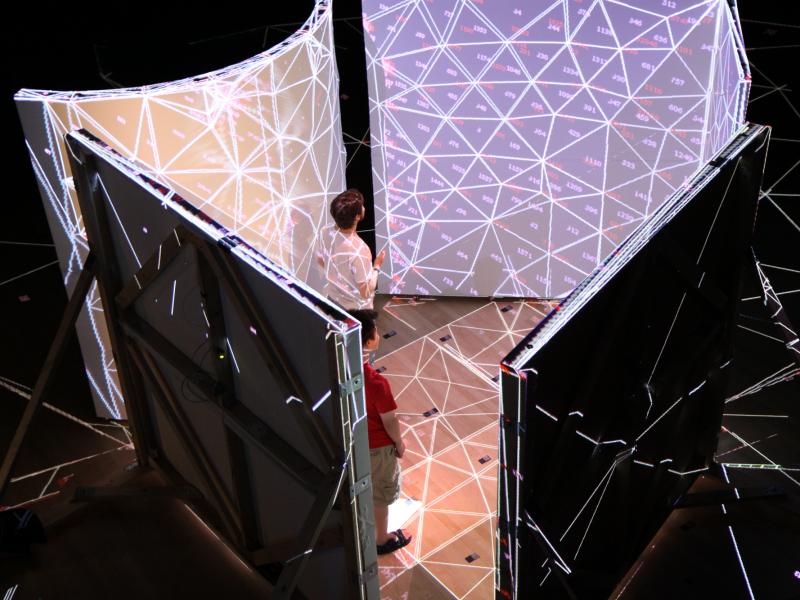 In the summer of 2015, two Rensselaer students will be afforded unprecedented resources and support to undertake projects at the forefront of their academic fields. The Jaffe Student Production Competition is pleased to announce that PhD architecture candidate Ute C. Besenecker and PhD arts candidate Ryan Ross Smith have been selected as the inaugural winners of the competition, which was open to students of all schools and departments. Each will receive full funding and technical support for a summer residency at the Curtis R. Priem Experimental Media and Performing Arts Center (EMPAC) at Rensselaer Polytechnic Institute (110 8th St., Troy), including a materials budget, access to facilities and production staff, as well as a two-month stipend.

The Jaffe Student Production Competition was created thanks to generous support from David and Amy Jaffe in order to allow students from across Rensselaer to take advantage of EMPAC’s unique infrastructure and the expertise of its staff. In September 2014, 80 students from across the institute gathered for the first of two orientation meetings, where EMPAC production staff demonstrated the facility’s advanced capabilities in video, audio, and systems for spatial movement, equally suited to arts production, big data visualization, and any research integrating digital technology with human-scale environments. Later in the winter, 25 students presented their initial project concepts. EMPAC production staff worked with these ideas to provide feedback and begin mapping logistics. Fifteen project proposals were ultimately submitted upon the January 2015 deadline and were subsequently vetted by a selection panel, including faculty and EMPAC experts, based on concept, budget, timeline, and effective use of the facilities provided.

Ute C. Besenecker’s winning proposal is called “Beyond Appearances: Investigating Preference and Neural Correlates for Colored Light of Similar Chromaticity.” Using the EMPAC Theater, EEG equipment, and the latest 7-color LED theater lighting system, Besenecker will test the neurological and physiological response of a group of test subjects to different colored-light environments. As part of her doctoral research, the work will draw on prior investigations into perceptual detection of and preferences for particular spectral mixes of light color. The work hopes to yield practical data for the fields of architecture and theatrical performance design.

Ryan Ross Smith’s winning proposal is called “A Generative Opera for Reconfigurable Realtime Performance and Assemblage.” Using EMPAC’s Studio 1, complete with its full multi-channel video and audio capabilities, Smith will stage and document Opera3, the third in a series of “generative” opera works he’s composed, which balance artistic decisions with the autonomous operation of computer systems. For this piece, he will enlist the help of fellow art doctoral student Kelly Michael Fox, as well as outside musicians and performers. Prior to the residency, Smith will create the score and libretto for his opera relying on a system of “animated musical notation,” which expands the musical staff with digital tools. The residency will then consist of set construction, including large-scale projection screens, and the documentation of performance. The resulting single- and multi-channel video piece will be made viewable in gallery settings as well as online.