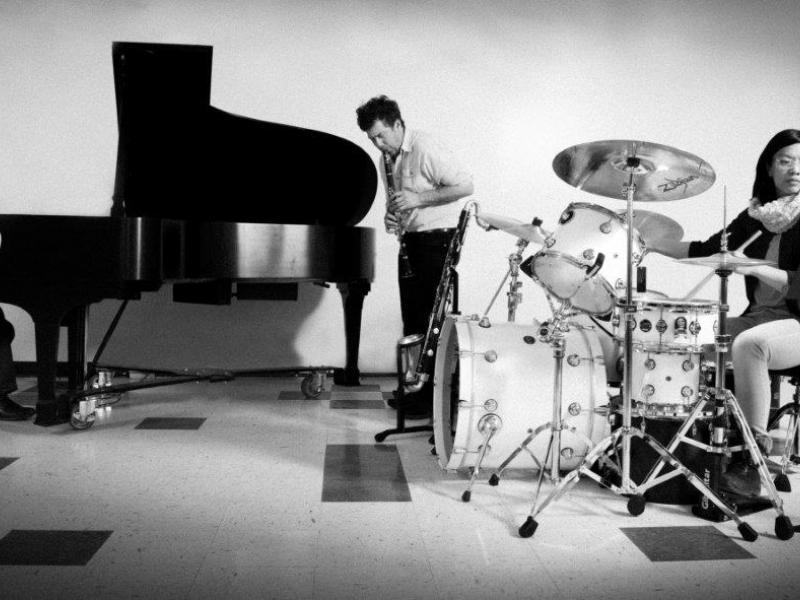 Earth Trio features Michael Century, professor of music and new media in the School of Humanities and Arts and Sciences Arts Department; David Rothenberg, a clarinetist, composer, and philosopher known around the world for his music and his books on relationship between humanity and nature; and Susie Ibarra, a percussionist, composer, teacher and practitioner of world music.

Troy, N.Y. —  In celebration of Earth Week, the School of Humanities, Arts, and Social Sciences (HASS) at Rensselaer Polytechnic Institute is set to debut an innovative artistic performance combining music, philosophy, and the sounds of nature on Friday, April 24 on the Rensselaer Troy campus in the Curtis R. Priem Experimental Media and Performing Arts Center Concert Hall. The program will begin at 7 p.m. with a lecture titled “The Nightingales of Berlin.” The musical performance featuring the Earth Trio 2015 will begin 8 p.m.

“Music does connect us to the world,” said Michael Century, professor of music and new media in the HASS Arts Department. “It’s not a separate category for escape or diversion only.  The 2015 Earth Day Music Celebration builds on the highly impactful Earth Week Festival that was held in 2013, which attracted large audiences that attended a series of performances, talks, panels and films at EMPAC.”

Century, who is also a pianist, accordionist, and composer, noted that this year’s event brings together several world-class musical and intellectual talents in a two part program. “Susie Ibarra and David Rothenberg are unique musicians that I have known for years with strong commitments in their art to the environment and sustainability matters.”

The lecture titled “The Nightingales of Berlin” will be delivered by David Rothenberg. Rothenberg is a clarinetist, composer, and philosopher known around the world for his music and his books on relationship between humanity and nature.  He is the author of Why Birds Sing, on making music with birds, which was widely translated. It was turned into a feature length BBC TV documentary.  His following book, Thousand Mile Song, is on making music with whales.  It was turned into a film for French television. As a composer and jazz clarinetist, Rothenberg has eleven CDs out under his own name, including On the Cliffs of the Heart, and a record on ECM with Marilyn Crispell, One Dark Night I Left My Silent House.  Other releases include Why Birds Sing and Whale Music.  He invited many musical colleagues to join him on Whale Music Remixed, with contributions from noted electronic artists such as Scanner, DJ Spooky, Lukas Ligeti, Mira Calix, Ben Neill, and Robert Rich.

The Earth Trio includes Century, Rothenberg, and Susie Ibarra. Ibarra is a percussionist, composer, teacher and practitioner of world music.  She is also noted as a humanitarian working with indigenous peoples through music, a TED Fellow, and a collaborator working with artists in other media.  Her composition Circadian Rhythms, for 77 percussionists and surround soundscape, was premiered at the 2013 Earth Week Festival at EMPAC. Ibarra has performed and recorded with the Who’s Who of creative musicians internationally, notably John Zorn and George Lewis, Pauline Oliveros, Wadada Leo Smith, Ikue Mori, and at many major festivals including the 2012 London Olympics Arts Festival and the Sharjah Art Festival in the United Emirates.

“Musically at home in classical, contemporary, and improvisational settings, Century joined the Rensselaer Arts Department in 2002 after a varied career as university teacher, new media researcher, inter-arts producer, and arts policy maker. His works for live and electronically processed instruments have been performed and broadcast in concerts and festivals internationally.