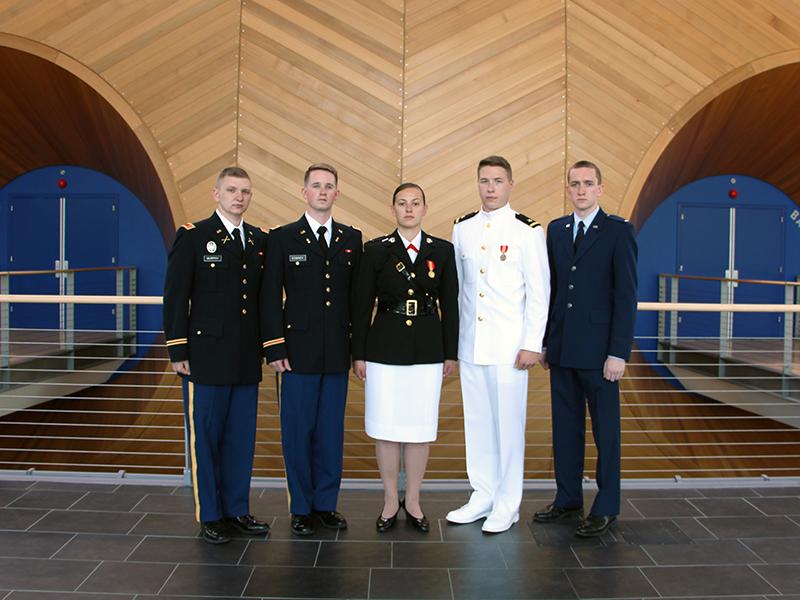 The Reserve Officers’ Training Corps (ROTC) programs at Rensselaer Polytechnic Institute are elective programs for students who desire commissions in the United States Armed Forces. This year, 28 students will be graduating from the ROTC program, and starting active military service as officers with the Army, Navy, Marine Corps, and Air Force. Photo credit: Rensselaer/Trish Galvin

Troy, N.Y. – The Reserve Officers’ Training Corps (ROTC) programs at Rensselaer Polytechnic Institute are elective programs for students who desire commissions in the United States Armed Forces. This year, 28 students will be graduating from the ROTC program, and starting active military service as officers with the Army, Navy, Marine Corps, and Air Force.

Commissioning signifies the beginning of a student’s active military service. Each student will take an oath of office in his or her respective branch of service in one of three commissioning ceremonies scheduled during the month of April and May, prior to the 209th Commencement ceremony of the Institute that will be held on Saturday, May 30 at 8:30 a.m. in the East Campus Athletic Village Stadium.

In the Army, the Mohawk Battalion operates as the Army’s only commissioning source for colleges and universities throughout the Capital Region. This year, seven of the 16 graduates that will be commissioned as second lieutenants are from Rensselaer. Of the 16 total commissionees, seven will go into active duty, five will go into the National Guard, and four will go into the Reserve. Assignment locations for the new lieutenants include: Fort Sill, OK.; Fort Bragg, NC; Fort Carson, CO; Fort Bliss, TX; and Korea. The Commissioning ceremony was held on on Saturday, May 9, in Student Union on Siena College campus.

From Naval ROTC, 12 students will be commissioned as ensigns and four as second lieutenants into active duty in the United States Navy or Marine Corps. Future career paths for those commissioned include: five surface warfare officers (one who will be nuclear-trained), three submarine officers, three aviation officers, one EOD officer, and four Marine Corps officers.

The commissioning ceremony will be held on Friday, May 29, from 9 to 11 a.m. on the Rensselaer campus in the Curtis R. Priem Experimental Media and Performing Arts Center (EMPAC) Theater. Vice Admiral David Brooks Robinson (Ret.) will deliver the keynote address and Oath of Officer. Originally from Alexandria, Louisiana, Vice Admiral Robinson graduated from the U.S. Naval Academy in 1963 and received a master’s degree in oceanography from the Naval Postgraduate School.

While serving as the Commanding Officer of USS Canon in Vietnam, then-Lieutenant Commander Robinson’s gunboat came under heavy enemy fire. Wounded with a broken leg and numerous shrapnel wounds from an enemy rocket- propelled grenade (RPG), Robinson directed the actions of his ship in order to clear the enemy ambush site. For his actions, Robinson was awarded the Navy Cross. Vice Admiral Robinson went on to serve as the Commanding Officer of USS Ready (PG-87), USS Luce (DDG-38), and USS Richmond K. Turner (CG-20). Additionally, he served as the Commanded Destroy Squadron EIGHT and Commander of Naval Surface Force, U.S. Pacific Fleet from April 1993 until his retirement in June 1996.

In the Air Force, nine graduates will become pilots, cyber operations officers, logistic readiness officers, missile operations officers, behavioral scientists, and acquisitions management officers. The commissioning ceremony will take place from noon to 2 p.m. on Friday, May 29, in the EMPAC theater. Colonel Kurt A. Hammer will deliver the keynote address.

Colonel Kurt A. Hammer is the Inspector General for the 914th Airlift Wing, Niagara Falls Air Reserve Station, New York. Colonel Hammer enlisted into the Active Duty Air Force in 1976 and reported to Blytheville Air Force Base, Arkansas, as a Supply Specialist for his first assignment. In 1976, Colonel Hammer transferred to the Reserves and joined the 914th Airlift Wing as a supply technician. In 1985, via Officer Training School, Colonel Hammer commissioned as a 2nd Lt and continued on at the Niagara Falls Air Reserve, serving first as an Education Officer, then moving on to Deputy Chief, several Commander positions, and finally to his current assignment as Inspector General.

The overall objective of the ROTC program is to develop professional officers who have varied educational backgrounds in major fields of interest and have the professional knowledge and standards needed for future growth. Although the aim in each service is the same, the individual programs differ because of varying responsibilities assigned newly commissioned officers in the three services and differing plans of continuing education.

On Saturday, May 30, Rensselaer will host its 209th Commencement ceremony.  This year, Admiral Michelle Howard, Vice Chief of Naval Operations, will address graduates at the ceremony. She will be joined by noted filmmaker and scholar Dr. Henry Louis Gates, Jr., cybersecurity policy expert Craig Mundie, and financial services pioneer and “patriotic” philanthropist David Rubenstein. Howard will receive an honorary degree at the ceremony, along with Henry Louis Gates, Jr., Craig Mundie, and David M. Rubenstein.

Prior to the ceremony, on Friday, May 29, The Honorable Shirley Ann Jackson, Ph.D., and the 2015 Honorary Degree Recipients come together to discuss “Resilient Leadership for a Resilient World.” The Colloquy will be held at 3:30 p.m. in the concert hall of the Curtis R. Priem Experimental Media and Performing Arts Center (EMPAC). For more information, visit: http://www.rpi.edu/colloquy/

In the weeks leading up to the ceremony, join the social media discussion using the hashtags: #RPICommencement, #RPIColloquy, #RPI2015. Follow @RPInews for more Commencement 2015 highlights.