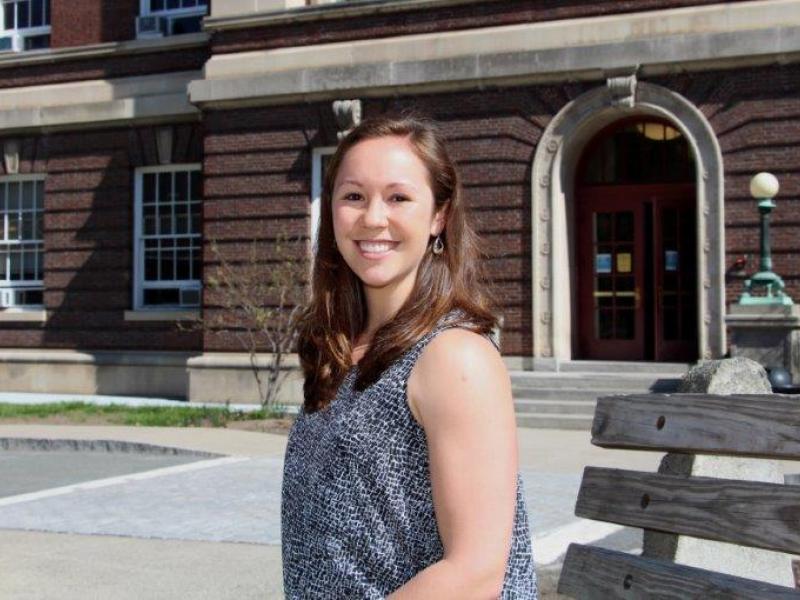 Troy, N.Y. – Five years have flown by for Rensselaer Polytechnic Institute student Meghan Olson, who last year completed a dual Bachelor of Science degree in Mechanical Engineering and Design, Innovation, and Society. On Saturday, May 30, Olson will receive a Master of Science degree in Mechanical Engineering during the Institute’s 209th Commencement Ceremony, and begin a new chapter in her life.

“I found out about the Design, Innovation, and Society degree when I was in 10th grade, and RPI was a top choice school for me from that day on—I even came to visit the school at that time,” Olson said. “ The key selling point for me was the vision statement of the programs in Design and Innovation (PDI) – ‘to produce students who can synthesize engineering, social science, and design profession approaches in the creation of innovative solutions to design challenges of the 21st century.” I loved the idea that innovation would be part of my education. I wanted to learn how to be more creative and was excited about the opportunity to dual major in engineering and design while playing on a Division 3 women’s tennis team.”

While at Rensselaer, Olson carved out time to pursue a plethora of activities that included serving as a teaching assistant for How to Change the World, a course created by the popular professor Burt Swersey, who passed away in March of this year; planning and hosting one of the annual Elevator Pitch Competitions; and serving as captain of the women’s tennis team. She gained recognition for her efforts as three-time winner of the annual Change the World Challenge competition, as well as a Liberty League All-Academic honor, the Rensselaer Founders Award of Excellence, and landed a spot on the cover of the Rensselaer alumni magazine.

This spring Olson was appointed as a University Innovation Fellow (UIF) by VentureWell. In this position, she has been working to “catalyze greater levels of innovation and venture activity at RPI while collaborating with other student UIF leaders from around the country.” The program is managed by the National Center for Engineering Pathways to Innovation (Epicenter), and funded by the National Science Foundation as a partnership between Stanford University and VentureWell, formerly the NCIIA. Since holding the position, Olson says that she has been on a mission to make innovation and entrepreneurship more accessible for students on campus by working closely with student leaders and key faculty and staff in the Paul J. ’69 and Kathleen M. Severino Center for Technological Entrepreneurship as well as the Emerging Ventures Ecosystem

“One of the biggest challenges that I’ve ever had to overcome while at RPI was the sudden passing of Professor Burt Swersey just a couple of months ago,” Olson said. “It was an unexpected personal and academic obstacle. Without question, I jumped back in as a teaching assistant for Inventor’s Studio, as I had told him I needed to scale back because of the time I needed for my master’s project and the job search. Burt’s passing actually added work to my plate, because of my determination to help preserve his legacy. I am coping by contributing and by making the promise that I will continue to contribute.”  Here’a video of Olson talking about Professor Swersey: https://youtu.be/g5HmXNEnUUk

Following graduation, Olson will start her career as an engineer in the System Design & Accessories Fluid Systems at GE Power & Water in Schenectady and plans to reside in the City of Troy. In addition, her younger sister will be joining Rensselaer as a member of the Class of 2019.  Before leaving the Rensselaer campus, Olson shares a letter about how Rensselaer has changed her life:

“Rensselaer has changed my life. Not temporarily, but permanently. The connections that I made in my time at RPI are priceless and the influences from countless mentors, advisers, professors, and friends have quite literally changed the trajectory of my life. I entered RPI excited about the dual major I’d chosen in Mechanical Engineering and Design, Innovation & Society, thrilled to be a member of the women’s tennis team, and ready to work hard—but not having a clue of what to expect.

I was lucky enough to meet Professor Burt Swersey on day one of classes. I smiled nearly the entire time he was talking and, by the end of class, my hand was cramping from writing ferociously every time he exclaimed, “write this down!” I knew that I was going to love RPI from the moment that Burt started telling my class that he was going to teach us to learn how to see, to question what exists, to challenge assumptions, and to solve real problems in society—and that as visionary engineers, we’d have the skills to figure out ‘how.’

Burt was my first role model at RPI. He became a constant, persistent mentor, while quickly helping me grow my network of mentors and role models as he challenged me to push the boundaries of my comfort zone. Because of Burt, I was introduced to the entrepreneurial community early on into my RPI career, as he insisted that my classmate Caroline and I enter the RPI Change the World Challenge. Soon after, we pitched an idea at the Elevator Pitch competition and then again to Disney Imagineers.

I’d found a new community in all of the entrepreneurship activities at RPI led by the former Vice Provost of Entrepreneurship, Rob Chernow, and I just couldn’t get enough. Rob became another mentor too—spreading the message that while everyone didn’t have to be an entrepreneur, everyone had to learn how to think and act like one.

During my sophomore year, I started to seek out opportunities to network with new people. I came up with questions to bring to office hours as an excuse to get to know professors better. RPI had already changed me. My personal growth during my time at RPI has transformed me from a contributor to a leader, never satisfied by simply accepting what exists without question and always trying to make things better. My growth at Rensselaer hasn’t just been about knowledge and the ability to perform well on difficult exams, but about learning how to think, communicate, innovate, and act.

Earlier this month, as I sat in the PDI Studio room during my last Inventor’s Studio class as a teaching assistant and Rensselaer student, I also realized that this was the first time that final presentations in Inventor’s Studio have gone on without Burt, a class of his creation. In that moment, I couldn’t help but think about all of the times he challenged me to think bigger and all of the people who have positively influenced my time at RPI.

Burt always said—when someone asks you to draw a tree, never forget to draw the roots. See what others don’t see. My time as a student at RPI is coming to a close, but the roots of my career will always be in the connections that I’ve made at RPI and the values that I’ve developed, by which I live my life. The title of your degree may represent the visible branches of the tree, but it is acknowledging your roots that makes you unique. Acknowledge your roots by investing in relationships and connections. I’m not only leaving RPI with a degree, but with an intense passion for the school and I owe that to the people who got me to where I am today.

My advice to those who still have time left at Rensselaer is to nurture relationships and find multiple people on campus who become your personal advocates. Work for it. Fight for it. Do something to impress them. Try something new. You may just find that person who looks you in the eye and tells you that ‘you are the best,’ who yells to a class of freshman students ‘can you do it?’ until they respond, ‘of course!’ with conviction. You may just find one, or dozens of people who make you realize that it is because of them that you were meant to be at RPI.

My mom once told me that ‘life is full of paths that never cross, so celebrate the ones that do.’ Today I celebrate not my accomplishments, but the amazing people who have gone above and beyond in their level of mentorship, to the people who have believed in me, challenged me, inspired me through tears, given me the privilege to speak in front of a crowd, taught me things that a textbook never will, and valued my opinions. You are the ones who make this school great and who inspire the students to go out and change the world. Will I use the skills that I’ve developed at RPI throughout my life to do well by doing good? Absolutely. Of course!”