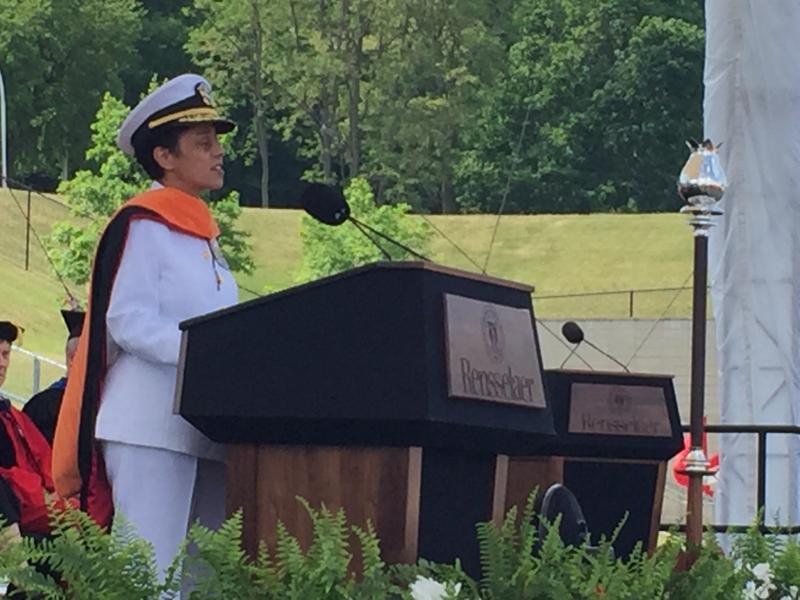 Troy, N.Y. – Vice Chief of Naval Operations Admiral Michelle Howard—the first female promoted to four-star Admiral and the first African-American woman to attain a four-star rank in the Department of Defense—urged graduates to remember their roots and “embrace your inner engineer,” at the 209th Commencement at Rensselaer Polytechnic Institute (RPI) Saturday.

“Whether or not you ever work as an engineer, remember this from your time at RPI; embracing your inner engineer means that you will always learn, you will never lose your love of discovery, and you will always be ready to roll up your sleeves for hard work,” said Howard. “Take what you have learned here at RPI—the knowledge, the methods, the relationships—and apply it to our world’s most vexing problems.”

Howard addressed 1,672 graduates, their families, and friends at the 209th Rensselaer Commencement today, held at the East Campus Athletic Village. During the ceremony, Rensselaer awarded a total of 1,838 degrees. They include: 164 doctoral degrees, 544 master’s degrees, and 1,130 bachelor’s degrees. Some graduates have earned more than one degree.

Citing the accomplishments of the Commencement honorands, figures from Rensselaer history, and two 2015 graduates, Rensselaer President Shirley Ann Jackson told graduates that they were prepared to “seek out the ‘terra incognita,’” the term often written on ancient maps to indicate an area that was unexplored. In that realm, Jackson said, “you will take with you the knowledge and insights of your Rensselaer education. You will invest that education in all you encounter and apply it with new understanding.

“With these four exceptional pioneers and explorers on our stage today, I remind our graduates that your Rensselaer degrees place you firmly in a long and distinguished tradition of exploration and pioneering breakthroughs,” Jackson said. “You are here, as students, for four or five years, but you are Rensselaer graduates, alumni and alumnae forever.

“As you cross the threshold of new adventures, you will encounter the limitations of established knowledge, the limitations of your own knowledge; the boundaries and constraints others may try to impose—and the necessity of learning continuously,” Jackson said. “We feel that we have prepared you for this. And remember, the hopes, the dreams, the expectations, and the best wishes of all of us go with you. Let them sustain you. Seek out the ‘terra incognita.’ What would be more exciting, and important?”

Class of 2015 President Adam Koehr invoked the words of his father, who told him, “remember, people do not want to hear life advice from a 22-year old.” Koehr heeded his father’s advice and instead shared with his classmates his reasons for joy on the occasion of Commencement.

“After four years of intensive coursework, we have finally reached the pinnacle,” said Koehr. “Along the way we have accomplished some truly amazing things. We have not shied away from challenges, but instead embraced them. I have been impressed with generosity and involvement of this graduating class.”

Mundie issued a “homework assignment” in the form of a list of challenges faced by the world the graduates inherit: power for the planet, the future of cities, issues of water, energy, and food for global population of 10 billion, and the need for education and health care for that population. The answers, said Mundie, lie with scientists and engineers working with policy makers.

“I believe that without the help of scientists and engineering, not only will we not get the changes that we need, but we also won’t get the policies to promote those changes,” Mundie said. In a final thought, he told graduates that he often says, “when you have problems that need solutions, who are you going to call? Call an engineer. Congratulations.”

Rubenstein gave graduates four pieces of advice: find something you want to do in life and love it; experiment until you find your love; be humble; and give back to others. In closing, he quoted not only the famous phrase “ask not what your country can do for you—ask what you can do for your country” from President John F. Kennedy’s 1961 inaugural address, but also its closing line:

“With a good conscience our only sure reward, with history the final judge of our deeds, let us go forth to lead the land we love, asking His blessing and His help, but knowing that here on Earth, God's work must truly be our own.”

Michelle Howard is the 38th Vice Chief of Naval Operations. On July 1, 2014, she made U.S. Navy history as the first female promoted to four-star Admiral and the first African-American woman to attain a four-star rank in the Department of Defense. In 1999 she took command of USS Rushmore, becoming the first African-American woman to command a ship in the U.S. Navy. She supported Operations Desert Shield and Desert Storm in the Arabian Gulf, Operation Joint Endeavor in the Adriatic, and operations with navies of seven African nations. As Amphibious Squadron Seven Commander she led tsunami relief efforts in Indonesia and maritime security operations in the Arabian Gulf. She commanded Expeditionary Strike Group Two and Task Force 151, a multinational counter-piracy effort in the U.S. Central Command Theater.

Henry Louis Gates, Jr. is the Alphonse Fletcher University Professor and Director of the Hutchins Center for African and African American Research at Harvard University. An Emmy Award-winning filmmaker, literary scholar, journalist, and cultural critic, he has authored 17 books and created 14 documentary films. His PBS documentary series, The African Americans: Many Rivers to Cross, earned an Emmy Award. He serves as editor-in-chief of TheRoot.com, a daily online magazine. The Henry Louis Gates, Jr. Reader, a collection of his writings, was published in 2012. He was awarded a “genius grant” by the MacArthur Foundation, and became the first African-American scholar to be awarded the National Humanities Medal. He is a member of the American Academy of Arts and Letters and serves on a wide array of boards.

Craig Mundie is President of Mundie & Associates, which counsels CEOs on technology strategy. In December 2014 Mundie retired from Microsoft, where he was Chief Research and Strategy Officer since 2007 and the principal technology-policy executive since 1998. Mundie joined Microsoft in 1992 after departing as CEO from Alliant Computer Systems, which he co-founded in 1982 and took public in 1987. Previously he worked at Data General Corporation and received his BSEE and MSICS degrees from Georgia Tech. Mundie serves on the boards of the ISB and Raintree Oncology Corporation and as adviser to Aurasense Therapeutics, Madrona Venture Group, CFR, CSIS, and the Cleveland Clinic. Mundie served Presidents Clinton, Bush, and Obama on the NSTAC. President Obama appointed him in 2009 to the PCAST, on which he still serves.

For information regarding Commencement, visit: http://www.rpi.edu/academics/commencement/

Please Note: All degree numbers and facts include Troy and Hartford campus students and degrees issued in August and December 2015. All numbers cited are as of May 29, 2015, and are subject to change up until Commencement.