Why did the dinosaur cross the equator…and then keep going? 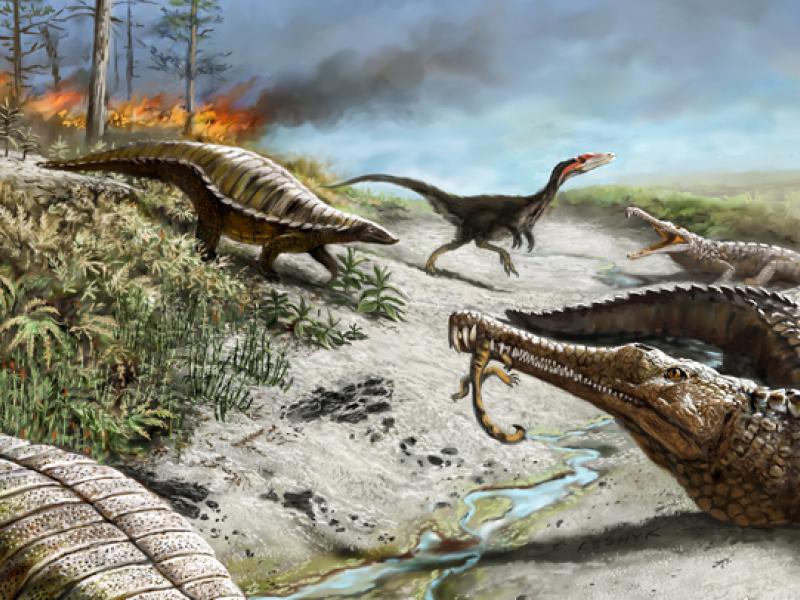 What Are eVTOLs? Are They the Future of Aviation?
Here’s how Fed rate hikes are hurting tech firms
Protect the Future: How to Stop AI from Overpowering Humanity
Designing Assignments in the ChatGPT Era
Rensselaer Researcher Mohammed Zaki Is an AAAS Fellow
June 15, 2015

Why did the dinosaur cross the equator…and then keep going?

Troy, N.Y. – New research from an international team, including researchers at Rensselaer Polytechnic Institute (RPI), has uncovered the mystery of why large Triassic dinosaurs took more than 30 million years to populate the tropics.

“This really is the first time we’ve been able to connect so many environmental dots from a single key region and time in the evolutionary history of early large dinosaurs,” said Morgan Schaller, an assistant professor in the Department of Earth and Environmental Sciences within the School of Science at Rensselaer.  “These indicators paint a picture of relatively inhospitable conditions for herbivores at these low latitude locations – there’s no reason for them to remain during hot, very dry, periods when their food sources are unstable.”

The climate, characterized by wet seasons in some years and extreme droughts in others, was punctuated by raging wildfires every few dozen years that reached temperatures of up to 600 degrees Celsius. The conditions would have made it difficult for abundant vegetation to grow and survive; vegetation that the Triassic predecessors of more well-known Jurassic sauropods (like Brachiosaurus, Diplodocus, and Brontosaurus) would have fed on.

“The conditions would have been something similar to the arid western United States today, although there would have been trees and smaller plants near streams and rivers and forests during humid times,” said Jessica Whiteside, lead author, and a professor at the University of Southampton in England. “The fluctuating and harsh climate with widespread wild fires meant that only small two-legged carnivorous dinosaurs, such as Coelophysis, could survive.”

Scientists took rock samples from a location called Ghost Ranch, in New Mexico, where a number of Triassic dinosaur fossils have been discovered. The rocks were deposited by rivers and streams between 205 and 215 million years ago, during the Late Triassic Period. When the rocks were deposited, northern New Mexico was very close to the equator, at about 12 degrees north in latitude.

The team analyzed the rocks — by crushing samples of them and measuring the abundance of stable isotopes of carbon and oxygen using a mass spectrometer – and determined changes in ecosystem productivity and estimates of atmospheric CO2 levels. They also determined estimates of wildfire temperatures (from fossil charcoal), the types of plant living in the region (from fossil pollen and spores), and the types of vertebrate animals living in the region.

As part of his contribution to the research, Schaller used stable isotopes of carbon from ancient soils to estimate atmospheric CO2 levels, finding that the levels were up to six times higher than at present day.

“This finding is significant because with our current understanding of climate sensitivity to atmospheric CO2, it suggests surface temperatures were on average something like 10 degrees Celsius higher than today,” Schaller said. “We also have to keep in mind that the Late Triassic Earth was a very different world than today; all the land masses were assembled into one supercontinent and there was no ice at the poles. Conditions may not have been favorable in equatorial regions, but there was plenty of ecological space for these animals in temperate locations, where they apparently thrived.”

The researchers noted that, should carbon dioxide levels continue to increase along their present trajectory, similar conditions could develop, suppressing equatorial ecosystems.

This study is part of a multiyear, multi-institutional project, funded by the National Science Foundation and other organizations, to understand Late Triassic environments and ecosystems in northern New Mexico.