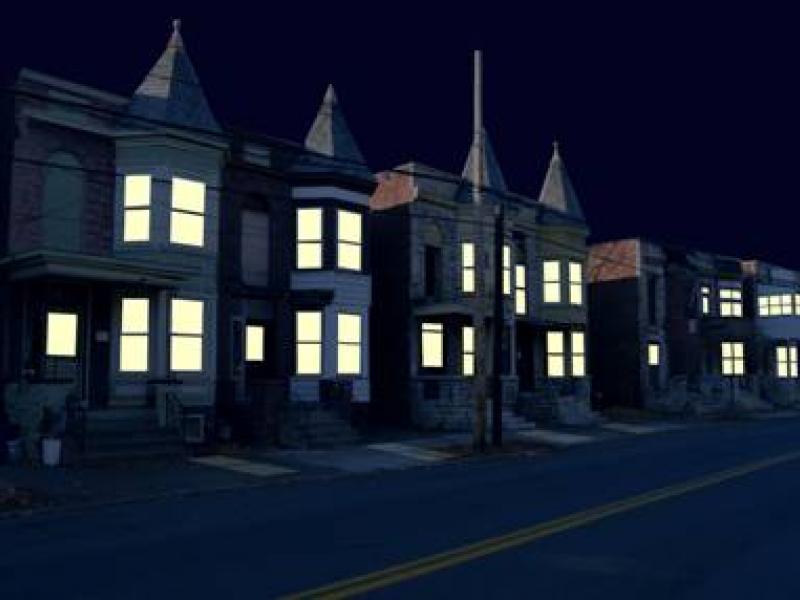 Breathing Lights, the joint submission from Albany, Schenectady, and Troy, proposes to illuminate up to 300 vacant homes in the three cities nightly over two months in fall 2016.

ALBANY, NY – Bloomberg Philanthropies today announced that Breathing Lights, the regional submission by the cities of Albany, Schenectady, and Troy, has been selected as one of four areas from across the United States to receive up to $1 million as part of the Bloomberg Philanthropies Public Art Challenge. Other winning cities are Gary, Indiana;  Spartanburg, South Carolina; and Los Angeles, California. Full information on all projects can be found at http://publicartchallenge.bloomberg.org/.

Breathing Lights, the joint submission from Albany, Schenectady, and Troy, proposes to illuminate up to 300 vacant homes in the three cities nightly over two months in fall 2016. Working with lead artist Adam Frelin; lead architect Barbara Nelson, AIA, who also serves as manager for campus planning and facilities design at Rensselaer Polytechnic Institute; and more than 25 community and private sector partners, including the Lighting Research Center at Rensselaer Polytechnic Institute in Troy, this installation aims to regenerate interest in once-vibrant neighborhoods that currently have high vacancy rates.

The project will culminate in a regional summit on vacant homes and neighborhood revitalization that will engage local residents, prospective buyers and investors, and policy makers. Full information on Breathing Lights, including a short video; bios for Adam Frelin, Barbara Nelson, and project coordinator Judie Gilmore; and a full list of partners, is available at BreathingLights.com.

Bloomberg Philanthropies invited mayors of U.S. cities with 30,000 residents or more to submit proposals for innovative temporary public art projects that address a civic issue, and demonstrate close collaboration between artists or arts organizations and city government. Proposals covered a range of issues, such as the revitalization of decayed downtown areas, underutilized waterfronts, and vacant neighborhoods. They also addressed social themes including neighborhood safety, environmental sustainability, and promoting city identity. More than 230 cities submitted proposals for consideration in the Public Art Challenge, representing 68 million residents across the United States.

“The selection of Breathing Lights as a national Public Art Challenge winner is a testament to the power of collaboration,” said Albany Mayor Kathy Sheehan. “This is a huge honor, and shows that when partners work together, incredible things can happen. We are proud to be part of this collaboration between talented artists, three great upstate cities, and a host of Capital Region community groups. It’s a powerful example of how the arts can bring attention to one of the major urban issues in our cities: vacant buildings and their potential to become productive again.”

“It’s a unique privilege to have helped our region be selected as a winner of the Bloomberg Philanthropies Public Art Challenge,” said Schenectady Mayor Gary McCarthy. “Not only is this a game-changer for our region, but it has a special relevance for Schenectady. Breathing Lights draws on our region’s rich engineering history, and pays homage to Thomas Edison, who headquartered his Edison Machine Works in Schenectady in 1887.”

“The issue of neighborhood revitalization is at the forefront of our efforts in Troy,” said Troy Mayor Lou Rosamilia. “When we first heard about Breathing Lights, we immediately knew it was a way to literally shine a light on the issues of urban vacancy and community development. Breathing Lights is a creative way to engage residents and organizations across the region in a way that can produce meaningful transformation in our neighborhoods and cities.”

“When we first heard about the Bloomberg Philanthropies Public Art Challenge, we worked quickly to issue a public call for submissions,” said Karen Bilowith, president and CEO, the Community Foundation for the Greater Capital Region. “Two of these submissions, sent independently by Adam and Barbara, complemented each other perfectly. We brought Adam and Barbara together, and they developed Breathing Lights as a completely original public art project that would also serve as a strong call-to-action around the issues of neighborhood revitalization, abandoned buildings, and equity in community development. Breathing Lights represents our collective vision for drawing much-needed attention to the issue of neighborhood and community revitalization through public art.”

“I'm drawn to art projects that have a strong visual impact,” said lead artist Adam Frelin. “I’ve always been interested in public art, and I’m ecstatic to take part in a project that is truly massive in scale. In many ways, being an artist today requires that I work collaboratively. What will make this process rewarding for me is having the chance to work with architects, engineers, private-sector partners, and civic leaders in my community to bring about a creative outcome that is greater than what any one of us could have accomplished alone.”

“The Bloomberg Philanthropies recognition and support will catapult our region into the world of public art,” said lead architect Barbara Nelson, AIA. “It is an honor to have our proposal evaluated alongside big cities with well-established public art initiatives. We sought to propose a beautiful temporary art installation with permanent impact. We took the Bloomberg Philanthropies objective of art as a vehicle for community and economic development very seriously. This project challenges the public to see vacant structures as economic resources instead of just liabilities.”

The Public Art Challenge grant will cover development, execution, and project-related expenditures, but will not fund 100 percent of project costs. The grant will provide catalytic funds as part of a strong, committed consortium of supporters. Working together, the Breathing Lights team has already raised $500,000 in matching funds to support the project and related community engagement activities.

The Capital Region’s work on the Public Art Challenge is in alignment with the work of the Regional Alliance for a Creative Economy’s Capital Region Creative Economy Project. The joint application also reflects the growing trend toward collaboration between local cities, municipalities, businesses, and nonprofit organizations to encourage projects and initiatives that benefit the entire region.

ABOUT THE REGIONAL ALLIANCE FOR A CREATIVE ECONOMY

The Regional Alliance for a Creative Economy is a community-selected assembly of Capital Region leaders working on behalf of the region’s creative economy. This project operates under the leadership of the Center for Economic Growth and the Community Foundation for the Greater Capital Region.

The Creative Economy of New York’s Capital Region encompasses the enterprises and people involved in the origination, production, and distribution of goods and services in which artistic and cultural content gives the product or service value in the marketplace.

For more information and a full list of partners, visit www.UpstateCreative.org.

Bloomberg Philanthropies’ mission is to ensure better, longer lives for the greatest number of people. The organization focuses on five key areas for creating lasting change: public health, environment, education, government innovation, and the arts. Bloomberg Philanthropies encompasses all of Michael R. Bloomberg’s charitable activities, including his foundation and his personal giving. In 2014, Bloomberg Philanthropies distributed $462 million. For more information on the philanthropy, visit bloomberg.org or on Facebook, Instagram, and Twitter @BloombergDotOrg.