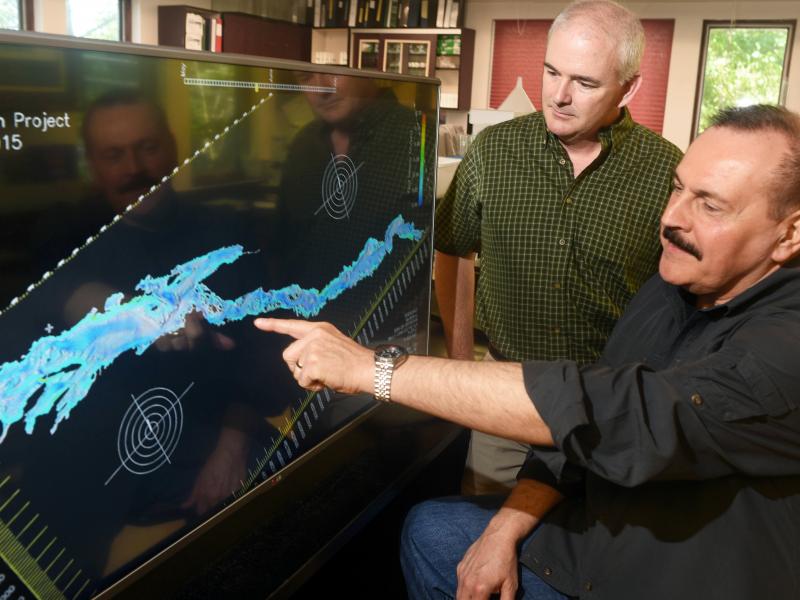 Troy, N.Y. – The Jefferson Project at Lake George, one of the most ambitious research projects to deploy Big Data and analytics technology to manage and protect a body of fresh water, is entering a new phase in which enormous amounts of data will be captured from sensors and analyzed. Scientists anticipate that insights uncovered from the data collection and discovery stage of the project will not only help manage and protect one of America’s most famous lakes, it will also create a blueprint to preserve important lakes, rivers, and other bodies of fresh water around the globe.

The potential impact of these new developments extends well beyond the shores of Lake George. By capturing and pooling data from all sorts of sensors and swiftly analyzing it, scientists, policy makers, and environmental groups around the globe could soon accurately predict how weather, contaminants, invasive species, and other threats might affect a lake's natural environment. Armed with these new insights and a growing body of best practices, corrective actions could be taken in advance to protect fresh water sources anywhere in the world.

A collaboration between IBM Research (NYSE: IBM), Rensselaer Polytechnic Institute (RPI), and The FUND for Lake George, the Jefferson Project involves more than 60 scientists from around the world including IBM Research labs in Brazil, Ireland, Texas, and New York. The project is deploying Internet of Things technology on a grand scale in conjunction with research and experimentation to understand the ecology of large lakes and the impact of human activity.

Thirty-five years of monitoring the chemistry and algae in Lake George by scientists at Rensselaer’s Darrin Fresh Water Institute, in collaboration with The FUND for Lake George, have demonstrated the lake is changing. Chloride inputs from road salt have tripled, algae have increased by one-third, and five invasive species have been introduced. These factors threaten entire regional economies driven by water recreation, boating and other forms of tourism on fresh water lakes, rivers, and streams.

The new phase of the project is the culmination of several milestones. An array of sophisticated sensors of different shapes and sizes, including underwater sonar based sensors, customized software programs, and solar energy systems to power off-grid equipment have now been deployed, tested, and refined. These enhancements have led to greatly improved measurement data that will be used to better understand the lake and lead to improvements in the accuracy of four predictive models built by IBM researchers that precisely measure weather events, water run-off from the surrounding mountains into the lake, inputs of road salt to the lake, and water circulation.

Even as the data collection and discovery phase of the Jefferson Project ramps up, the ambitious initiative has already offered intriguing insights into Lake George. For example, Lake George flows south to north, with the lake draining into Lake Champlain via the La Chute River. However, sensors deployed on the lake bottom during the winter ice-over period recently confirmed complicated flow patterns within Lake George. These findings, which are being further investigated, include higher than expected currents and countercurrents during the time in which the lake is frozen.

In addition, data from sensors recently confirmed the existence of an underwater “ghost wave” that can be as high as nearly 100 feet running about 30 feet below the surface of the 32-mile-long lake. Scientifically known as a seiche wave, the phenomenon is characterized by dramatic oscillations that occur beneath the lake that are mostly undetectable on the surface. The seiche wave phenomenon was first discovered by noted Swiss Hydrologist François-Alphonse Forel in 1890, on Lake Geneva, Switzerland.

The computing infrastructure powering the Jefferson Project involves multiple computing platforms, ranging from an IBM Blue Gene/Q supercomputer located in a data center on the Rensselaer campus, to embedded, intelligent-computing elements and other Internet of Things technology situated on various sensor platforms in and around the lake.

These four models, together with Rensselaer’s food web model, which examines how the lake’s ecosystem is affected by nature and human activities, comprise the interconnected environmental management system, which is the heart of the project. The food web model is also being further calibrated with extensive surveys of the lake’s algae, plants, and animals.

“The Jefferson Project provides the unique opportunity for biologists and environmental scientists to work closely with engineers, physicists, computer scientists, and meteorologists to understand large lakes at a level of detail and intensity that is simply unprecedented,” said Rick Relyea, director of the Jefferson Project at Lake George, Rensselaer professor of biology, and the David M. Darrin ’40 Senior Endowed Chair. “Together, we will make tremendous inroads into understanding how lakes naturally behave and how human activities alter biodiversity, the functioning of freshwater ecosystems, and overall water quality.”

“The world’s important bodies of fresh water such as Lake George are precious to people, essential to life, and drive the economy, but they’re under siege from a growing list of threats,” said Harry Kolar, IBM Distinguished Engineer and associate director of the Jefferson Project. “The key to protecting this precious natural resource lies in the data, and the stage is now set to discover a deluge of insights about the delicate ecology of the lake and the factors that threaten it. The results of our efforts will help drive new ways to protect bodies of fresh water around the world.”

"Never in the history of any fresh water lake in the world has the caliber of science and technology now being brought to Lake George been applied for the purpose of sustaining lake health, ‘from physics to fish,’ ” said Eric Siy, executive director of The FUND for Lake George. "The empowered science of the Jefferson Project will empower people to ensure the lake is protected for future generations.”

The work of the Jefferson Project builds on the findings from “The State of the Lake: Thirty Years of Water Quality Monitoring on Lake George, New York, 1980-2009,” a study released in 2014 by Rensselaer and The FUND for Lake George. For the past 35 years, research on Lake George was conducted manually, with scientists laboriously collecting water samples by hand for analysis in the lab.

Now with the Jefferson Project, this important work is being digitized and accelerated, augmented with automated real-time data monitoring via a customized network of sensors that collect massive amounts of information and transmit it to supercomputers for analyses and modeling using sophisticated 3-D visualization technology. The project is also developing new tools, such as image recognition software that identifies plankton from data collected via a GPS-enabled towable camera, as well as state-of-the-art data visualizations that bring new data-driven discoveries to life for scientists, tourists, and local residents.

More than ever, saving and protecting bodies of fresh water around the world is critical. Fresh water comprises only 3 percent of all water on Earth, and two-thirds of it is frozen. The profound impact of fresh water – underscored by the severe drought in California and recent, devastating floods in Texas – vividly demonstrates how closely water is linked to the economy and the welfare of people and all living things. Fresh water is the lifeblood of agriculture and industry, and entire regional economies are driven by water recreation, boating, and other forms of tourism dependent on lakes, rivers, and streams.

About the Jefferson Project at Lake George

The Jefferson Project is named after President Thomas Jefferson, who described Lake George as, “without comparison, the most beautiful water I ever saw.” The three-year initiative aims to establish one of the world’s most sophisticated lake environmental monitoring and prediction systems, giving scientists and the community a real-time picture of the health of the lake.

The project combines advanced data analytics, computing and data visualization techniques, new scientific and experimental methods, 3-D computer modeling and simulation, and historical data to gain an unprecedented scientific understanding of Lake George. It is a historic partnership of The FUND for Lake George, IBM, and Rensselaer to make Lake George a global model for ecosystem understanding and protection. By creating predictive capacities that harness latest science to light the path forward, this model aims to deliver ecological and market benefits that are widely felt, in the U.S. and worldwide.