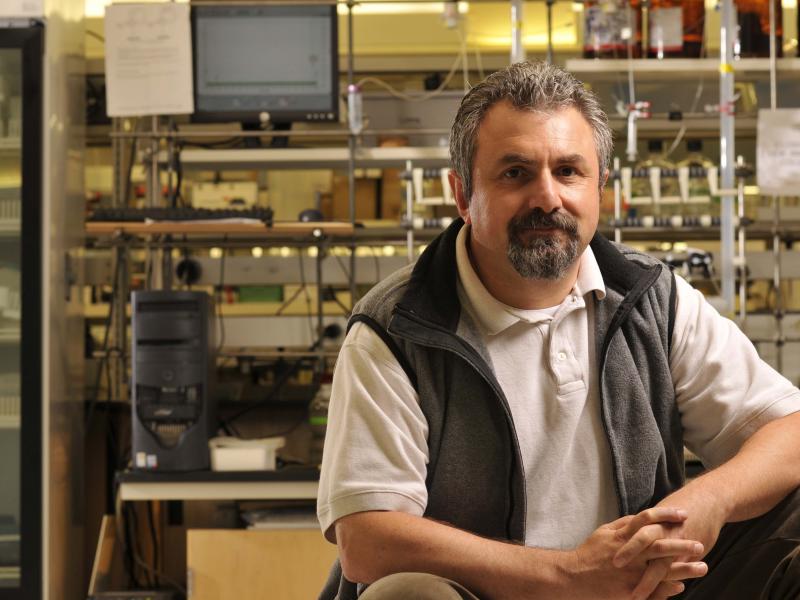 Linking computation with experimentation, researchers at Rensselaer Polytechnic Institute (RPI) have shown that proteins can be engineered to fold more quickly and achieve greater stability by optimizing the interactions between charges on the surface of the chain of atoms that makes up the protein.

“What we showed was that when you modify the charges on the surface of the protein, when you optimize the charges, you create a protein that folds more efficiently and is more stable than its naturally occurring counterpart,” said George Makhatadze, a chaired professor in the Biocomputation and Bioinformatics research constellation, professor of biological sciences, and member of the Center for Biotechnology and Interdisciplinary Studies (CBIS) at Rensselaer Polytechnic Institute. The research appears in “Modulation of Folding energy landscape by charge-charge interactions: Linking experiments with computational modeling” in the Proceedings of the National Academy of Sciences (PNAS).

Proteins are composed of a long chain of amino acids. Interactions between the atoms composing the chain cause the protein to twist and turn and ultimately assume a folded shape that requires the least amount of energy to maintain. As the protein folds, the energy of each conformation in the process can be mapped into an “energy landscape.” The most efficient possible energy landscape would move straight from high to low energy. In reality, most proteins have a “frustrated” energy landscape, with several bumps and rolls as the protein assumes its folded state.

The finding, which stems from Makhatadze’s research on altering the speed of protein folding, was surprising because theory predicts that naturally occurring proteins evolved to fold in the most efficient possible manner. Typically, it is within this folded state that proteins accomplish their function.

In the PNAS research, engineered proteins exhibited a smoother, less frustrated energy landscape from the unfolded to the native state, and they folded more quickly and are more stable than the wild-type protein.

“We changed the energy difference between the native and unfolded state,” Makhatadze said. “And the modeling suggests that the protein folding landscape becomes even less frustrated than the wild-type protein because we have optimized the protein.”

Equally important, Makhatadze said, is that the work links computation with experimentation.

“Using computational modeling, we are able to rationalize why it is that these proteins with optimized charges are folding much faster,” said Makhatadze. “We analyzed why this happens and we showed that — with computation — we can predict the bulk properties of the molecule, that is both the thermodynamics and kinetics, and that allows us to validate the computational model.”

Ultimately, Makhatadze is working to redesign proteins to decrease the speed at which they unfold, a capability that could be useful in industrial applications where more durable enzymes might be to accomplish work – like breaking down cellulose in paper manufacturing – that currently requires toxic chemicals.