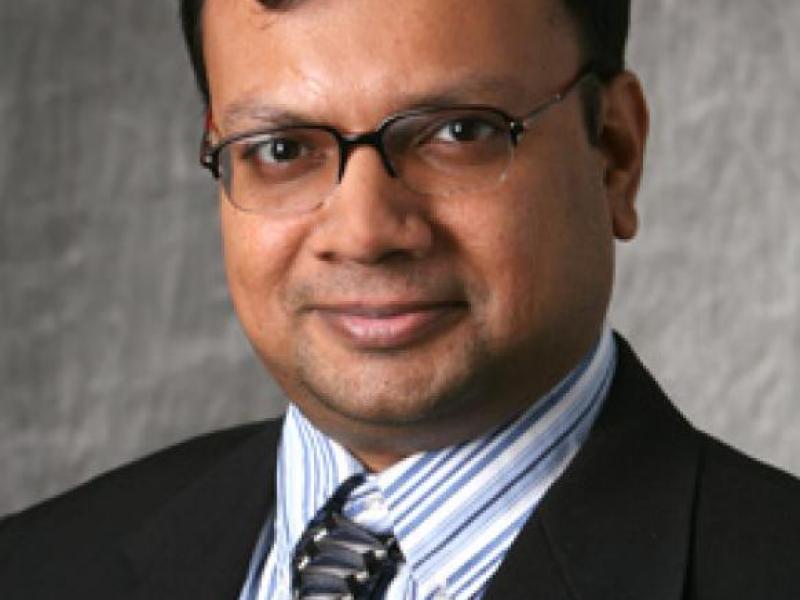 Troy, N.Y. — Computational mechanics expert Suvranu De has been named the J. Erik Jonsson ’22 Distinguished Professor of Engineering at Rensselaer Polytechnic Institute. An endowed professorship is among the highest honors bestowed on a Rensselaer faculty member.

“Dr. De is truly a gifted scholar and outstanding educator with an international reputation,” said Shekhar Garde, dean of the School of Engineering. “He has made major advances in computational algorithms that have opened new frontiers in the area of virtual surgery. Through this leading-edge research, he is seeking solutions to some of the most challenging problems of our time. It is noteworthy that Dr. De also leads the largest department on campus (MANE) and shares a deep commitment to providing innovative engineering education to our students and to creating an environment conducive to learning and discovery throughout the School of Engineering. The J. Erik Jonsson ’22 Distinguished Professorship is a wonderful and well-deserved recognition of Dr. De’s accomplishments and contributions.”

The J. Erik Jonsson ’22 Distinguished Professor of Engineering is supported by an endowment established in 1997 by Kenneth A. Jonsson to “provide the means through which Rensselaer can attract and retain pre-eminent scholars who will play a leadership role and set an example to others in bringing innovation in undergraduate education to the forefront. The J. Erik Jonsson ’22 Professor will strive to develop the best innovative means of teaching our students and preparing them to be the leaders in our global society.”

A prolific researcher, De is known internationally for his work on computational mechanics and multiscale modeling. A major aspect of his research program is developing new touch-sensitive virtual reality tools for training surgeons and simulating experimental surgical techniques. Along with creating accurate computer models of human internal organs, De develops realistic hardware interfaces with real surgical tools that can interact with the computer models in real time.

With more than $15 million in external grant funding to date, he leads research in virtual surgery, developing computer generated simulation environments for surgical planning, competency, and patient safety. His major contributions include the development of meshfree computational mechanics algorithms for real-time computing, multi-grid and multi-resolution algorithms, and realistic interfaces for simulation of traditional laparoscopic and emerging surgical procedures.  His research has been funded by the National Institutes of Health, Office of Naval Research, Army Research Office, Defense Threat Reduction Agency, National Science Foundation, and numerous companies.

In addition, De holds 14 copyrights and one patent. He has supervised or is currently supervising 18 postdoctoral students and three senior research faculty.

De is the recipient of a 2005 Office of Naval Research Young Investigator Award, the Rensselaer School of Engineering Excellence Award in 2008, the inaugural James M. Tien ’66 Early Career Award for Faculty in 2009, and the Rensselaer School of Engineering Outstanding Team Award in 2012. He is a senior member of the Institute of Electrical and Electronics Engineers (IEEE), and serves as chair of the Computational Bioengineering committee of the U.S. Association for Computational Mechanics and vice chair of the IEEE Technical Committee on Haptics. He also serves on editorial boards of national and international conferences and journals and on several peer-review panels of federal funding organizations.

For more information on Suvranu De and MANE at Rensselaer, visit: