Application of New Spectroscopy Method To Capture Reactions in Photosynthesis 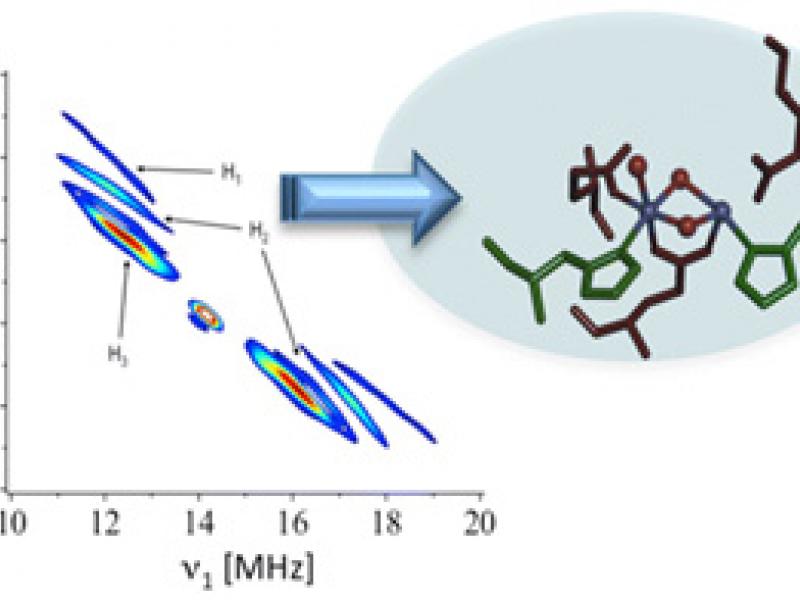 Application of New Spectroscopy Method To Capture Reactions in Photosynthesis

A new spectroscopy method is bringing researchers at Rensselaer Polytechnic Institute (RPI) closer to understanding – and artificially replicating – the solar water-splitting reaction at the heart of photosynthetic energy production.  Understanding the step-by-step mechanism of photosynthesis could lead to methods of producing highly efficient solar energy. The  spectroscopy method, a novel use of “2D HYSCORE,” is able to capture the reactions that split water and hydrogen peroxide in metal-containing proteins or metallo-enzymes in nature.

The researchers, led by Rensselaer professor K.V. Lakshmi, developed the method as part of an ongoing investigation into the photosynthetic protein, Photosystem II. Details of the research “Two-Dimensional HYSCORE Spectroscopy of Superoxidized Manganese Catalase: A Model for the Oxygen-Evolving Complete of Photosystem II” were published in the Journal of Physical Chemistry.

“The solar-powered water-splitting photosynthetic protein complex, Photosystem II, catalyzes one of the most energetically demanding reactions in nature by using light energy to split water to dioxygen,” said Lakshmi, associate professor of chemistry and chemical biology, and scientific director at the Baruch ’60 Center for Biochemical Solar Energy Research at Rensselaer. ”However, the details of the water-splitting reaction have remained elusive due to the inability of conventional methods to probe the active site of metal-containing proteins, like Photosystem II.”

Photosystem II, found in plants and cyanobacteria, uses photons of light to break apart molecules of water, extracting electrons and protons to fuel the photosynthetic conversion of light and water into chemical energy that is used to power the planet. This reaction – solar oxidation of water – takes place in a cluster of oxygen, manganese, and calcium ions called the “oxygen-evolving complex.” The oxygen-evolving complex uses four photons of light to split two molecules of water in five distinct steps known as “S-states.” Each intermediate S-state, numbered from S-0 to S-4, is measured in trillionths of a second, and the final three S-states (S-2, S-3, and S-4)are highly unstable, making it difficult to determine the exact mechanism by which they occur.

In 2012, Lakshmi and her team used advanced spectroscopic techniques to describe the atomic-level mechanism of S-2, the third step in the process. In 2013, the team was awarded a three-year $500,000 Department of Energy grant to expand the scope of their research to the structure of the oxygen-evolving complex through the remaining S-states.

Developing novel applications of 2D HYSCORE – a new multidimensional electron paramagnetic resonance spectroscopic technique – is a part of that effort.

In a recent breakthrough, the researchers used 2D HYSCORE to study manganese catalase, a similar, but simpler, metal-containing protein that bacteria use to split hydrogen peroxide. The researchers successfully resolved the active site geometry of the manganese catalase intermediate, which includes determination of the oxidation state of the individual metal ions and the atomic structure of the bound water ligand within the active site.

“We use manganese catalase as a model to develop and apply this new method,” said Lakshmi. “And the insight that we have gained on the mechanism of manganese catalase and the high-resolution spectroscopic methods that we have developed in this study greatly enhance the ultimate goal and bring us closer to determining the mechanism of the solar-powered water-splitting reaction of Photosystem II.”