An Out-of-This World Experience: Exploring the Role and Impact of Rensselaer in the Space Program 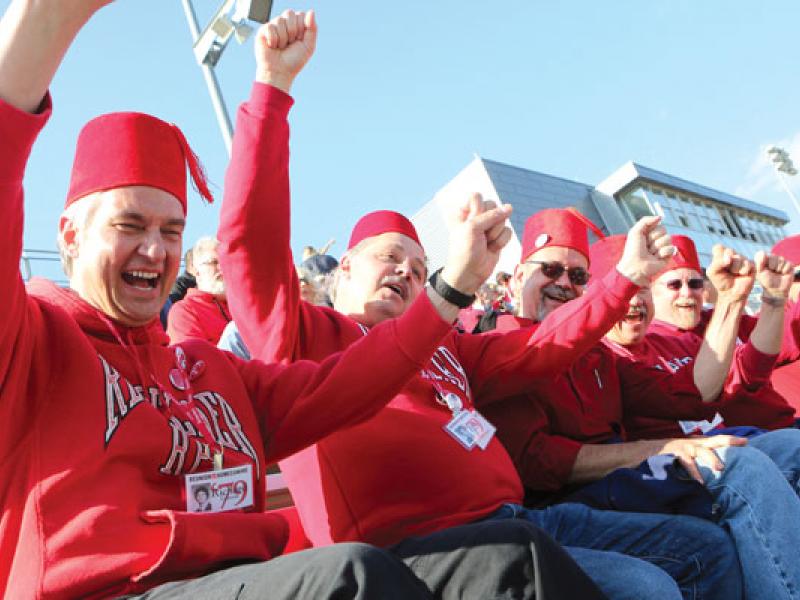 Rensselaer will host Reunion & Homecoming festivities Oct. 1-4. This year, a series of events pay homage to the theme of space, and explore Rensselaer connections to the National Aeronautics and Space Administration (NASA).

An Out-of-This World Experience: Exploring the Role and Impact of Rensselaer in the Space Program

Troy, N.Y. —  Rensselaer Polytechnic Institute alumni and alumnae will gather from across the country and around the world Oct.1-4 at their alma mater with fellow Rensselaer graduates to participate in Reunion & Homecoming weekend festivities. This year, a series of events pay homage to the theme of space, and explore Rensselaer connections to the National Aeronautics and Space Administration (NASA).

“Rensselaer has always had close ties to NASA, and we are honored this year to present a program that highlights those historical connections, while looking forward to the future of NASA and the Institute,” said Jeff Schanz, assistant vice president for alumni relations, who also serves as executive director of the Rensselaer Alumni Association (RAA) Board of Trustees.

To build anticipation for the series of events planned, Reid Wiseman ’97, a NASA astronaut who was stationed aboard the International Space Station (ISS) last May, will take part in a Twitter Q&A this Friday, September 25, at 2:30 p.m. EST. Last year, Wiseman joined the Rensselaer Reunion & Homecoming festivities via video call for a special conversation with fellow alumni from aboard the ISS. He talked about the current state of the space program, gave insight into daily life on the ISS, and reflected on the ways his Rensselaer education put him on a path toward his ultimate career ambition – space travel.

On Saturday, October 3, Rensselaer alumni and alumnnae, students, faculty, staff, and members of the campus community are invited to attend a special NASA program featuring Rensselaer President Shirley Ann Jackson, NASA Administrator Charles F. Bolden ’08 (hon.), and NASA Astronaut Reid Wiseman ’97. The event will be held on the Rensselaer campus in the Curtis R. Priem Experiemental Media and Performing Arts Center (EMPAC) Concert Hall from 9:30 to 11 a.m. The program, titled “Rensselaer Polytechnic Institute and NASA: Challenges, Opportunities, and Dreams,” will focus on a discussion of the future of space exploration, and the impact that Rensselaer research and Rensselaer people have had upon the field.

Charles F. Bolden Jr., Major General, USMC (Retired), is the 12th Administrator of NASA. At NASA, Bolden has overseen the safe transition from 30 years of space shuttle missions to a new era of exploration focused on full utilization of the International Space Station and space and aeronautics technology development.

Additional Reunion & Homecoming event highlights include the President’s State of the Institute Address on Friday, Oct. 2, beginning at 2:30 p.m. Immediately following the address, the campus will also celebrate the induction of seven new members into the prestigious Rensselaer Alumni Hall of Fame. The events will take place in the EMPAC Theater.

Rensselaer enjoys a rich history shaped by the vision and accomplishments of leaders and educators who built the university and alumni and alumnae who took inspiration in its halls. Since Rensselaer’s founding in 1824, these distinguished individuals have forged frontiers in industry, science, education, and technology. They have built bridges, probed outer space, revolutionized new industries and technologies, and discovered new knowledge.

Low earned bachelor’s and master’s degrees in aeronautical engineering from Rensselaer in 1948 and 1950. A Delta Phi fraternity member, Low led the Apollo Spacecraft Program that successfully landed Americans on the moon in 1969. He became the university’s 14th president in 1976, and passed away in 1984. Last summer, more than 180 alumni members of the Delta Phi fraternity, in honor of the fraternity’s founding date, returned to campus for a series of anniversary events, and to participate in the gallery rededication ceremony.

Several Rensselaer research projects have been launched into space over the last few years. In August 2009, an experimental heat transfer system designed by Rensselaer professors Joel Plawsky and Peter Wayner was installed on the ISS, where it will remain for several years. In November 2009, wear-resistant, low-friction nanomaterials created by Linda Schadler, Russell Sage Professor and vice provost and dean of undergraduate education, were blasted into orbit aboard Space Shuttle Atlantis, attached to the outer hull of the ISS, and exposed to rigors of space. In 2010 and 2011, Cynthia Collins, associate professor of chemical and biological engineering, sent an army of microorganisms into space to investigate new ways of preventing the formation and spread of biofilms, or clusters of bacteria, that could pose a threat to the health of astronauts. Collins’ NASA-funded research findings, published in PLOS ONE, represent a key step toward understanding and mitigating the risk these bacteria may pose to astronauts during long-term space flights, like future missions to Mars.

In addition to having astronauts on the two most recent space missions, members of the Rensselaer community are actively involved in the Mars Rover mission; many alumni were directly involved in the Apollo missions including George M. Low ’48, a past president of Rensselaer who directed the Apollo, Mercury, and Gemini programs, and John Swigert ’65, the command pilot who helped to guide the ill-fated Apollo 13 back to Earth; and many Rensselaer alumni are working to shape missions of the future.

On Friday, Sept. 25, beginning at 2:30 p.m. EST, individuals can follow the Twitter Q & A with Reid Weisman using the hashtag #RPIasksReid. The Rensselaer Alumni Twitter account will kick things off by asking a handful of questions to Wiseman. Rensselaer alumni and alumnae, students, faculty, and staff may continue the conversation and ask him questions as well.