A Detector Shines In the Search for Dark Matter 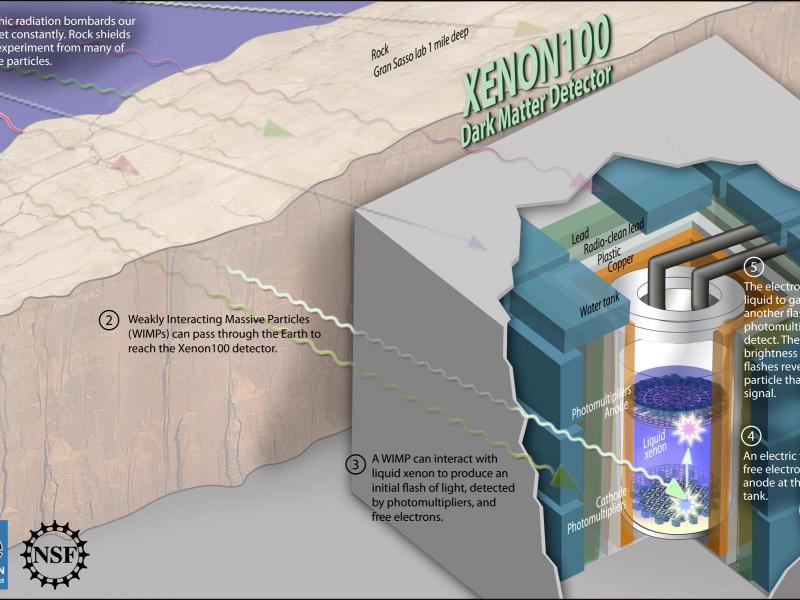 A Detector Shines In the Search for Dark Matter

Results of the XENON100 experiment are a bright spot in the search for dark matter. A team of international scientists involved in the project – which includes Rensselaer Polytechnic Institute (RPI) researcher Ethan Brown – have demonstrated the sensitivity of their detector and recorded results that challenge several dark matter models and a longstanding claim of dark matter detection. The results are published in two papers in the journals Science and Physical Review Letters.

Dark matter is an abundant but unseen matter in the universe considered responsible for the gravitational force that keeps the Milky Way galaxy together, said Brown, an assistant professor in the Department of Physics, Applied Physics, and Astronomy at Rensselaer.

“Dark matter, which is the cosmic glue responsible for the formation of galaxies, is all around us,” said Brown. “Most of the time it passes right through the tiny spaces between the subatomic particles that make up our bodies and the Earth, but occasionally it will bump into an atom, knocking it backward ever so slightly.”

Scientists from a dark matter project named Dark Matter Large Sodium Iodide Bulk for Rare Processes, and referred to as the DAMA/LIBRA project, claimed to have detected dark matter in 1998. The team observed a signal that varied with the seasons, as is expected for dark matter as the Earth’s orbit around the sun changes the speed at which it passes through a halo of dark matter that envelops the Milky Way, said Rafael Lang, an assistant professor of physics at Purdue University who was involved in the research.

However, other teams searching for dark matter did not observe the same signal, even though their experiments were more sensitive than DAMA/LIBRA. The DAMA/LIBRA team suggested that those groups could be blind to the signal because the dark matter was interacting with the atoms of the detector in an unexpected way, which they were not equipped to register, such as scattering off of electrons or creating photons in the detector. Most experiments have been designed to search for a scattering of dark matter off the nuclei of atoms of the detector material, as predicted by most theories, and are therefore not well tuned to distinguish the more exotic signals from radioactive backgrounds. But given the incredibly low background of XENON100, the detector would be able to distinguish those signals, and the data from XENON100 does not support the alternative dark matter models as an explanation of the DAMA/LIBRA result.

Shielded from cosmic radiation that could create background events, XENON100 is located under a mountain in the Gran Sasso National Laboratory in Italy, the largest underground laboratory in the world. The detector uses the noble gas xenon, kept liquid in a stainless steel container shielded and buried beneath one mile of rock. The detector is equipped with electronics that can detect even individual electrons and photons generated anywhere within the xenon, said Lang.

This fall the team will deploy a next-generation detector called XENON1T, which is expected to be 100 times more sensitive than XENON100. The detector itself will be 20 times bigger and include a series of technological improvements, said Elena Aprile, project lead and a professor of astrophysics at Columbia University.

“From the XENON100 results we know a lot more about what dark matter is not, which is very valuable information in the field of particle physics,” Aprile said. “We’ve ruled out models with the strongest expected dark matter interactions, and with the XENON1T detector we will be able to test those with weaker expected interactions and capture even the most feeble hint of a dark matter. The results of these experiments mean that if this is the right place to look for the signature of dark matter, we should be able to see it.”

The XENON experiment is a collaboration of 120 scientists, representing 24 different nationalities and 22 institutions across the world. In addition, around 60 graduate students are working in the collaboration, said Lang. The experiment is supported by the multiple funding agencies worldwide including the National Science Foundation.